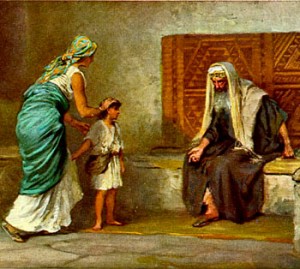 This scenario may seem a bit exaggerated, but that is exactly what Hannah endured.  Eli allowed his sons to run wild, without rebuke.   They were having sex with women when they brought sacrifices to the temple.  Eli did accuse Hanna of being drunk, but when she explained why she was praying, Eli blessed her.  Hannah walked away from the meeting with Eli, filled with hope that God was going to answer her prayer.  Regardless of Eli’s actions or lack thereof concerning his sons, he was still God’s man and prophesied her destiny. Perhaps that is what gave her the strength to leave her son at the temple, knowing that God was in control of her baby boy’s life.  What a lesson in trust!

Hannah understood Eli was avoiding disciplining his sons and was ignoring their immorality.  The corruption in the temple was widely known, but there was no other temple in which to attend.  There was not a church on every corner like today.

Elkanah, Hannah’s husband, remained faithful.  Every year he took his family on the journey to the temple to offer the sacrifice; doing right in the eyes of the Lord, regardless of the actions of the priests.  The country was in dismay from the corruption of Eli’s sons; the temple was no longer a safe place to access God.

Hannah’s prayer reached far beyond her own desire for a child;  her prayers reached into belly of heaven and saw a need ~ God’s need for a faithful priest and prophet.  One that would again consecrate the temple back to God, cleanse it from corruption, and be a voice for God to a hurting and oppressed nation.   The fire of God was being obscured and her young boy would rekindle the fire of the temple.  Samuel did just that ~ at only twelve years of age God prophesied through him to Eli concerning the priest’s death and that of his sons.

When we have a need, taking it before the Lord is the right thing to do.  God enables us to accomplish great exploits for Him when we go beyond ourselves and become kingdom minded.  Hannah, though she had a desire to have a child, turned it around and gave the gift back to God so that he would be a priest that would restore God’s house.  When we take care of God’s house first, He is faithful to take care of ours.

“Thus says the LORD of hosts, ‘This people says, “The time has not come, even the time for the house of the LORD to be rebuilt.”‘ Then the word of the LORD came by Haggai the prophet, saying, “Is it time for you yourselves to dwell in your paneled houses while this house lies desolate?” Haggai 1:2-4 NASB

God wants to do so much for us if only we would love Him and want to do things for Him.  Hannah, though sorrowful from her situation, did not just have Hannah in mind, she considered the condition of the house of God.  Regardless of her trials, she remained faithful to God.  She did not scream out for vengeance on her rival; she prayed to God, the only one who could intervene on her behalf.

“Pious Hannah was separated unto the Lord, and amidst trying domestic relationships knew how to have recourse to Him for all necessary grace to bear her troubles… It was no easy task to live for years with a nasty woman like Peninnah, but Hannah retained her serenity of soul and was a veritable lily among thorns.”[1]

Matthew Henry tells us that in the story of Hannah, it lays the first account of an individual addressing God as the Lord of Hosts.  She called on the name of Lord that would do battle for her; God who was the mightiest and all-powerful.

“Childless, Hannah was not prayerless.  Barren, she still believed, and in her pain found refuge in prayer.”[2]

Hannah is a beautiful example to follow to take everything to God in prayer.  How unfaithful I am in this practice.  I pray, but more often I complain about the injustice done unto me, the hurtful words flung my way.  How I desire to be like Hannah and rely on the Lord for everything!

“Whatever our particular sorrow may be, the Man of Sorrows waits to undertake.  Hannah carried her trial and yearning to God in prayer and she teaches us something about the necessity for form and the Spirit of intercession.”[3]

I find it curious that in the Bible, Hannah is our second example of a wife dearly loved yet is barren.  Rachael and Leah are quite similar to Peninniah and Hannah.  Peninniah and Leah both are able to bear children, yet are the less loved of two wives.  Rachael and Hannah are the “loved” wives and can’t have children.  It requires intercession on behalf of the barren to have children.  So often we feel barren, that we are not producing anything for the Lord.  We can take it to the Lord in prayer, and ask Him to make us fruitful.  He will honor our prayers when we seek His will.

Hannah, though she suffered through many sorrows, is a heroine of faith.  She remained gracious in her sorrow, interceded in the midst of trial, and witnessed God move on her behalf.  She was thankful to the Lord for His mercy and love towards her, reflected in her beautiful, poetic song ~ echoed years later in Mary’s Magnificat.
(1 Samuel 2:1-10)  She gave birth to one of the greatest prophets of Biblical history, dedicating him to the Lord.  She went on to bear five more children.  Hannah’s life is a beautiful song.

← Do I Love Jesus Enough?
Take A Break →