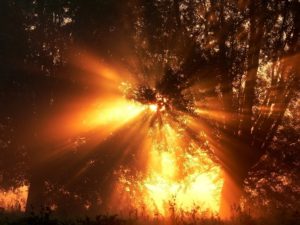 The long-fingered rays of the warm evening sun brushed her cheeks with the warm kisses in the quietness of the country evening.  She strode along the edge of the woods, seeking calmness.  The fragrance of the crushed, ripe, summer grass filled her nostrils along with the scent of wild day-lilies as they closed their faces in preparation of evening.  The beauty of competing nature filled her with the essence of sweetness as she yearned for the coming night.

It would be a quick trip to Louisville, but the long year had ended, and a new life was about to start.  At two o’clock in the morning, her “soldier boy”🇺🇸 would arrive ~ via taxi ~ at her Grandparents’ house.  His tour of duty in Europe was over, and she was going to collect him, and together they would soon arrive at their home.  They had been married less than a year when he got his call to serve and now it was time to put their lives back together ~ welding the temporarily broken cord into wholeness.  The seam would blend so effortlessly, no scar of separation would ever show.

It was time to make promises of caution to her Mother, put gas in the Plymouth, lock the doors, and head north-east.  The sun was now releasing its hold on the day, casting a pleading glow over her shoulder, and soon the headlamps would be needed. Purple shadows cast their mystery as they mingled with the dark green of the cedars and puddled in the dips and crevasses of the rolling hills.  A strange peace filled with a touch of loneliness and expectation filled her heart.  At times her fingers would tremble with excitement on the steering wheel.

The music ~ on the only clear AM radio station ~ was of the sentimental country genre.  She turned it low and let her thoughts soar and take her on a side trip through the future as she drove the familiar back roads to the big highway that would take her to the flow that endlessly poured into the looming city.

“What would their future hold?  Where would they be in the far distant time, say five years?  Would family form, would love last, would they still be the perfect fit, and growing even stronger as ‘one’?”

The music soothed and lulled from station WHAS; the songs in her head changed often in tempo, rhythm, and emotion; the miles passed.  Finally, she was there.  It was deep in the night in the little upstairs room on Magnolia Street.  She was sitting on the window ledge; the taxi appeared and the driver blew the horn…
They were the same, they had not changed. God blessed mightily!
~~~
Life happened so suddenly, it was breathtaking!  My head spins and I have to sit down when I think of the speeding time, the blur of memories, the milestones flashing by… Love was multiplied over, over, and again.  Children, grandchildren, and exploding change.  The sameness, new experiences, old memories relived, all seemed to have happened in two or three heartbeats.  We had expectations of strong health, vibrant life, and continued love going on forever till we were surprised by weakened bodies and changes so subtle, but consistent that often we ask, “What has happened!  Who are we?”

Yes, even the love has changed ~ the blush of fresh love, the sharing of the same breath and thoughts of earthy heaven has deepened and become a thing that has a life of its own.  It depends on each of us for its being, and we depend on it for our being.  Now life and love are composed of the endless compassion of two minds and desires that think and act as one. It is a remarkable blessing from God, finding after a lifetime of laughing, crying, spatting (plus!), growing, and experiencing startling changes, yet we are “one” and are so more each day.

It had been 58 years since the night time trip to Louisville when my eyes were fastened to the dark roadway lit by speeding yellow lights, while the eyes of my heart were fastened on the end of the road that held my future.  I could not have had a better trip, anyway I look at it, and it continues.~~~

I have shared this story a couple of times in the past.  It has now been 66 years of wedded wonder, including high-lights, low-lights, sorrow (valleys), euphoria (mountain tops) we have shared everything but boredom!  Thank You God for mercy (longevity), grace (Christian children), and blessings (Grandchildren and Great-grandchild).  Long may we enjoy!