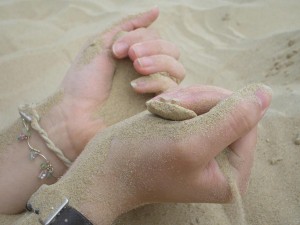 Don’t you love how the Word of God ~ like His compassion/lovingkindness ~ is new every morning? (Lamentations 3:22-23)  Don’t you love it when we read something very familiar and then out of the blue, it seems, the Holy Spirit points out something new in it?  That happened for me the other day when reading about John the Baptist in Matthew.  A phrase of John’s reached out and bumped up against me, as friends will when having a good time together, urging me to pause and take a second look:

“As for me, I baptize you with water for repentance, but He who is coming after me is mightier than I, and I am not fit to remove His sandals; He will baptize you with the Holy Spirit and fire.” ~ Matthew 3:11

“…and I am not fit to remove His sandals…”  What flashed through my mind then was, “Whoa, are you kidding me?  Jesus said John was the greatest of the prophets and if he’s not worthy, what chance is there for a ‘regular’ person like me?”

Hopefully this jump-starts a whole series of thoughts for you, but here’s where mine went next…

Our pastor teaches us from time to time that the majority of folks in Jesus’ day walked everywhere they went, which is why “walking” is an oft-used word-picture in the Word for living life ~ they lived their lives walking.  The roads, however, weren’t great to the feet while walking ~ roads were muddy in the rain and along with the mud were the natural,
but unpleasant results of having horses, oxen, sheep, goats, and other animals traveling on the road, without street cleaners or poop-scoopers following along.  Consequently, even the lowest of servants and slaves in that culture were not required to clean their masters’ feet; everyone did that for themselves because it was such an awful job.  So, now, here’s John the Baptist whom, again, Jesus calls the greatest of the prophets,
saying of himself “I’m not even worthy to be lower than the lowest slave to this One
who is coming.”

“Truly I say to you, among those born of women there has not arisen anyone greater than John the Baptist!  Yet the one who is least in the kingdom of heaven is greater than he.”
~ Matt. 11:11

“I say to you, among those born of women there is no one greater than John; yet he who is least in the kingdom of God is greater than he.” ~ Luke 7:28

“Least in the kingdom of God…” how many of us are more than ready to raise our hands to that one, saying, “Yes, that’s me!  Now you’re talking!  Prophets are one thing, but ‘least in the kingdom’? (as our all our failings, weaknesses, and selfishness leap to mind) that’s me!”  Think a moment on your reaction when you saw the title of this piece “Unworthy” ~ most of us will fall into 2 camps in our reaction: we respond with a slight twinge in the pit of our stomach, “Oh, that’s me, but more of this, really?” or maybe our flesh responds with its fallen arrogance, “Unworthy? Huh, not me!”  Both ends of that teeter-totter miss the mark!

For like John, we are none of us worthy to serve in the presence of the King of Kings and Lord of Lords, the Lord God Almightly, Maker of heaven and earth.

Yet it doesn’t matter because we are all also beloved of God ~ that same King of Kings, Lord of Lords, the Lord God Almighty, Maker of heaven and earth!

For God so loved the world, that He gave His only begotten Son, that whoever believes in Him shall not perish, but have eternal life.  For God did not send the Son into the world to judge the world, but that the world might be saved through Him.
~ John 3:16-17

…knowing, brethren beloved by God, His choice of you…
~ 1 Thessalonians 1:4

The kingdom of heaven is like a treasure hidden in the field, which a man found and hid again; and from joy over it he goes and sells all that he has and buys that field.

Again, the kingdom of heaven is like a merchant seeking fine pearls, and upon finding one pearl of great value, he went and sold all that he had and bought it.
~ Matthew 13:44-46

We, unworthy as we may feel/know ourselves to be, are nonetheless His chosen and beloved children!  WE are the treasure and pearl He paid all for!

For He rescued us from the domain of darkness, and transferred us to the kingdom of His beloved Son, in whom we have redemption through His blood, the forgiveness of sins.
~ Colossians 1:13-14

So, as those who have been chosen of God, holy and beloved, put on a heart of compassion, kindness, humility, gentleness and patience… ~ Col. 3:12

Therefore be imitators of God, as beloved children… ~ Ephesians 5:1

Therefore, everyone who hears these words of Mine and acts on them, may be compared to a wise man who built his house on the rock.  And the rain fell, and the floods came, and the winds blew and slammed against that house; and yet it did not fall, for it had been founded on the rock. ~ Matt. 7:24-25