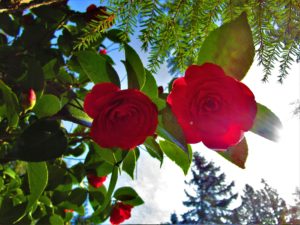 Over the years I have heard the Gospel presented many times by many preachers and in many styles.  There is a harsh approach, where the preacher tries to frighten people into faith, and there is a softer approach, where people are directed to the loving solution to sin found in Christ.  While both may present truth, it is my opinion that the softer approach is usually more effective.  Our God is holy, but He is also merciful.

Mercy has been defined like this ~ Mercy: the withholding of something negative that I absolutely do deserve.

Some years ago I heard a re-broadcast of Dr. James Boice on the Bible Study Hour.  He suggested that because of all our joy in the love of God, we tend to forget that He is also a God of judgement, and that some of the frightening things that are happening around the world may be a part of that judgement.  He commented that people frequently ask, “Why would a loving God allow such disasters?  Why should innocent people suffer?”  Dr. Boice’s response was, “That is the wrong question.  Seeing that we are all sinful and rebellious against Him, the real question we should be asking is: ‘Why have any of us been spared?’”
I felt myself flinch at that, but on further reflection I had to agree.  The answer to the question, of course, lies in the great mercy of God.

The first place to recognize our rebellion is in our own hearts.  If we have any integrity at all we will have to admit that we have all fallen short of God’s standards for fellowship with Him as outlined in the Ten Commandments.  Just the first Commandment alone (“Thou shalt have no other gods before me”) catches most of us up.  We have many “gods” we put before the Lord: self, money, children, power, things… just to name a few.  Yet, in spite of our defiance and how determined humanity is to destroy itself, He continues to love us.  It is how we respond to that love which determines our destiny.  He has done all He can to make sure we have a way of reconciliation with Him.  He has offered up His Son as an atonement for our sin and is mercifully holding back the full force of His wrath for now.

We should try to be just as merciful in our dealings with others.  When we present the Gospel, we need to remember what it was that brought us to Christ.  For me, coming from a family where I felt unloved, to hear and believe that God could love and value me just as I was, was overwhelming.  What if the one who led me to Christ had assumed I had to be kept at arm’s length until I had become “acceptable”?  The Gospel is not something we are to use as a weapon; it is the path to reconciliation with the Father.   We know how wonderful we feel when someone comes to faith; that is our goal.  Then why do we sometimes make it so difficult?

Ultimately, we have no right to point fingers in condemnation toward others, no matter how grave their sin.  We may be appalled, but God is able to forgive even the most grievous transgression.  He also knows the secret sins of our own hearts.  Only Christ, the sinless One, has the right to condemn us.  When Jesus confronted the woman at the well, a woman of easy morals, did He denounce her?  Did He shake his finger at her and call her hateful names and refuse to speak with her or send her away?  The answer is no.  He spoke to her quietly and with compassion.  He had the right to condemn her; He was God.  However, although He knew all about her promiscuity, He specifically said He did not condemn her, but simply that she should go and sin no more.  We are not God, and while we may recognize sin in others we also need to recognize the sin in ourselves.  We do not stop sinning just because we are saved, and we still need to ask forgiveness.  Rather than judging the sin of others, perhaps we should take a look inside first.

Mercy is also the approach we need to take in any difficulties with other believers.  While there are guidelines set up for discipline within the Church when there is overt sin, we need to exercise compassion and a willingness to forgive when there is true repentance.  Too often there is an attitude of the elder brother of the parable toward our prodigals.

It is Christ’s Church, not ours ~ and anyone should feel free to seek forgiveness from Him.  Not all of us will look or sound or act the same.  Do we assume ourselves to be superior because we have not had to wrestle with the same challenges as other people?  Are we forgetting that the sins of the spirit like pride, self-righteousness, mean-spiritedness, greed, lack of compassion, and envy are every bit as damaging to the soul as the sins of the flesh?  There is no hierarchy of sin; one kind of sin is not less than another.  We are all guilty.

We are Christians only because the Spirit of God has opened our spiritual eyes to our own sin and our need of reconciliation with God.  If we are forgiven it is only because of the mercy and grace of God.  Why should we presume that this makes us morally superior?  Christ is the righteous one; He is the one whose sacrifice pleases God.  We have mercifully been thrown a rope to pull us out of the quagmire of our own sin, and instead of being prideful, we need to be grateful and eager to share with others the same compassion which has been lavished on us.

Maybe this is also the place to state that salvation and forgiveness are not without cost.  The cost to Christ was the Cross.  We are told just to believe on the Lord Jesus Christ and we will be saved.  However, there is more involved in that word “believe” than a simple intellectual acknowledgement of His existence.  John the Baptist told his followers that they must repent and believe.  Christ then tells His new disciples that they should follow Him.  We should not believe that we can do whatever we like because we assume that if we mumble an offhanded, “Sorry– ” God will just forget about it.
God is not  deceived; He knows our hearts.  The use of the word “believe” throughout scripture implies a commitment and a willingness to change.  Abraham believed God; he took God seriously.  The word “conversion” means to turn around, to become transformed.  We are told to deny ourselves, take up our crosses and follow Him.  We are to be willing to relinquish our own authority over self and commit ourselves to the authority and sovereignty of God.  What we ask of others we need also to apply to ourselves.

The Second Epistle of Peter tells us how we are to conduct ourselves.  In the first chapter he tells us that because we have been given all things that pertain to life and godliness through the knowledge of Him who called us by glory and virtue, by which we have been given exceedingly great and precious promises; that through these you may be partakers of the divine nature, having escaped the corruption that is in the world through lust.  But also for this very reason, giving all diligence, add to your faith virtue, to virtue knowledge, to knowledge self-control, to self-control perseverance, to perseverance godliness, to godliness brotherly kindness, and to brotherly kindness love. (vs 3-7, NKJV)

These are the characteristics which mark a Christian.  He goes on to say, For if these things are yours and abound, you will neither be barren nor unfruitful in the knowledge of our Lord Jesus Christ.  For he who lacks these things is shortsighted, even to blindness, and has forgotten that he was cleansed from his old sins. (vs 8-9)

We must never forget how and why we came to Christ in the first place.  Our role is to share the Good News in a way that reflects the love, kindness and mercy of God, just as He poured out these things on us.  We are to try to look at other people through the eyes of Christ, with the same calm, compassionate concern that He felt for us.  God tells us to persevere ~ to be faithful in proclaiming the message of His love and mercy.  We are to prepare our hearts and minds to the best of our ability, with the strength and guidance of the Holy Spirit, to be worthwhile citizens of heaven.  Here is our mission in mercy:

Let nothing be done through selfish ambition or conceit, but in lowliness of mind let each esteem others better than himself.  Let each of you look out not only for his own interests, but also for the interests of others.  Let this mind be in you which was also in Christ Jesus, who, being in the form of God, did not consider it to be robbery to be equal with God, but made Himself of no reputation, taking the form of a bondservant, and coming in the likeness of men.  And being found in appearance as a man, He humbled Himself and became obedient to the point of death, even the death of the cross. (Philippians 2: 3-8)

← Nothing Can Take My Praise ~ A Song
A Great Privilege & A Rich Blessing ~ Thank you!!! →