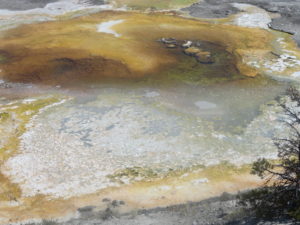 Don’t you just Really Love It when you’re reading the Word and the Holy Spirit makes something “jump” or “pop” out at you?  Especially when it’s something you’ve read or seen many times and then all of a sudden you see something new or fresh in it!

So, I was reading in Matthew a while back and came to this part about John the Baptist:

As for me, I baptize you with water for repentance, but He who is coming after me is mightier than I, and I am not fit to remove His sandals…

That phrase jumped out at me!  I thought, “Whoa! John says this of himself?!?!?!  If John says that about himself, what chance to do I have, or any us then?  Who are we?”  Which, of course, is an erring thought, but stay with me here for a bit because the Lord’s answer is really good!

Our pastor, in the course of his preaching and teaching has taught us that one of the conventions of the culture of Jesus’ day was that even slaves ~ the lowliest of the low ~ were not required to wash the feet of another.  People walked everywhere, in open sandals, on dusty or muddy roads shared by horses and other beasts of burden, and there were no pooper-scooper wagons or carts rolling along to clean up after these animals.  So, you get it, by the end of the day, a person’s feet could be a pretty disgusting mess, which not even slaves were required to clean ~ each person had to do that job for themselves.  Which, by the way, makes this scenario an even bigger deal:

Turning toward the woman, He said to Simon, “Do you see this woman?  I entered your house; you gave Me no water for My feet,  but she has wet My feet with her tears and wiped them with her hair.“
~ Luke 7:44

Now back to John the Baptist, who is saying of himself, essentially, “In comparison to the One Who’s coming, I’m not even worthy to do for this One what the lowliest of lowest slaves is not even required to do ~ touch or even remove His sandals…” (!!!)

The crowds of the day, the people, felt and knew John the Baptist to be a prophet of God (Luke 20:6) ~ and they were pretty excited about this, because God hadn’t sent them a prophet or said a word to them in over 400 years!  (Okay, a very few “in a city of Judah” – Luke 1:39 – had heard a little from the Lord, and about John the Baptist, when John’s dad Zacharias prophesied in the Lord. Luke 1:67 -79)  So through John, finally, was coming the long-awaited word from God!

Yeah, it came through kind of an odd prophet ~

Now John himself had a garment of camel’s hair and a leather belt around his waist; and his food was locusts and wild honey. (Matt. 3:4)

~ but God had been known to do some odd things with and through His prophets back in the day… Isaiah, one of the aristocrats of Israel, had been called on to go naked and barefoot for 3 years. (Isaiah 20:3)  Hosea was told to marry a harlot… (Hosea 1)

“Assuredly, I say to you, among those born of women there has not risen one
greater than John the Baptist; but he who is least in the kingdom of heaven is
greater than he…
For all the prophets and the law prophesied until John.
And if you are willing to receive it, he is Elijah who is to come.
He who has ears to hear, let him hear!”
~ Matthew 11:7-14

So again, here we have John the Baptist ~ whom the people hail and admire as a prophet and of whom Jesus Himself says, “among those born of women there has not risen one greater than John the Baptist” ~ saying of himself, that compared to the Messiah, who is the very Son of God, that he’s not worthy even of being lower than a slave to Him ~ and he’s right!  Which brings us back now to my original thought when this passage “hooked” me: if John ~ greatest among those born of women ~ considers himself so unworthy, then I’m really way down the list as there’s no way I can “rate” in the spiritual realms!  If John doesn’t “cut it”, with all of his accolades and accomplishments ~ his works and his righteousness ~ then I’m left way back in the dust of this parade!

But you see the errors in this line of thought, right?  And there are many of them!  John’s ideas were not about himself at all ~ they were all for Jesus!  John was just taking his usual straightforward way to make his point that the One who was coming wasn’t in any way like us ~ He was God with us!  “He will baptize you with the Holy Spirit and fire.” (Matt. 3:11) and in John 3, John the Baptist gives his final and amazing testimony about Jesus:

John answered and said, “A man can receive nothing unless it has been given him from heaven.  You yourselves are my witnesses that I said, ‘I am not the Christ,’ but, ‘I have been sent ahead of Him.’  He must increase, but I must decrease.
He who comes from above is above all, he who is of the earth is from the earth and speaks of the earth.  He who comes from heaven is above all.
What He has seen and heard, of that He testifies; and no one receives His testimony.
He who has received His testimony has set his seal to this, that God is true.
For He whom God has sent speaks the words of God;
for He gives the Spirit without measure.
The Father loves the Son and has given all things into His hand.  He who believes in the Son has eternal life; but he who does not obey the Son will not see life, but the wrath of God abides on him.”

The Holy Spirit’s point in bringing out the phrase that “jumped” at me, was not for me to go running down “rabbit trails”, tripping out in thoughts of unworthiness in comparison to the “great prophet” John the Baptist, but rather to follow in John’s footsteps in keeping my focus on Jesus and what He says!  And that’s one of the chief snares of the enemy, isn’t it?  He works to get our eyes off of Jesus and on to us, and typically our failures and all the myriad ways we can and do consider ourselves “unworthy”, with or without the help of the “accuser of the brethren”. (Rev. 12:10, Eph.6:16)  If we keep our eyes on Jesus and what He did and said, we see who we are, what our true worth is, and where that worth comes from!

What Jesus said:
~ Matthew 11: “but he who is least in the kingdom of heaven is greater than he …
(John the Baptist, greatest among men)

~ John 15:13 Greater love has no one than this, that one lay down his life for his friends.

We are the treasure and we are that pearl ~ worth enough in the eyes of God to give His all to purchase, redeem, and gather us in as His own!  We are His friends! (John 15:15)

What Jesus did:
~ Luke 22:41-44 And He withdrew from them about a stone’s throw, and He knelt down and began to pray, saying, “Father, if You are willing, remove this cup from Me; yet not My will, but Yours be done.” Now an angel from heaven appeared to Him, strengthening Him. And being in agony He was praying very fervently; and His sweat became like drops of blood, falling down upon the ground…

~ Philippians 2:5-9 Have this attitude in yourselves which was also in Christ Jesus, who, although He existed in the form of God did not regard equality with God a thing to be grasped, but emptied Himself, taking the form of a bond-servant, and being made in the likeness of men.  Being found in appearance as a man, He humbled Himself by becoming obedient to the point of death, even death on a cross.

~ John 19:30 Therefore when Jesus had received the sour wine, He said, “It is finished!” And He bowed His head and gave up His spirit.

~ 2 Corinthians 5:15 …and He died for all, so that they who live might no longer live for themselves, but for Him who died and rose again on their behalf.

This is who we are:
~ Jude 1 those who are the called, beloved in God the Father, and kept for Jesus Christ…

In other words, we are loved beyond belief, priceless beyond measure ~

For God so loved the world, that He gave His only begotten Son, that whoever believes in Him shall not perish, but have eternal life.  For God did not send the Son into the world to judge the world, but that the world might be saved through Him. ~ John 3:16-17

← Give Thanks to Him!
Sun of Righteousness →