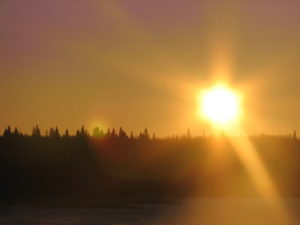 But for you who fear My name, the sun of righteousness will rise with healing in its wings… ~ Malachi 4:2

For our citizenship is in heaven, from which also we eagerly wait for a Savior, the Lord Jesus Christ; who will transform the body of our humble state into conformity with the body of His glory, by the exertion of the power that He has even to subject all things to Himself. ~ Philippians 3:20-2

“I am the Light of the world; he who follows Me will not walk in the darkness, but will have the Light of life.” ~ John 8:12

“You are the light of the world.  A city set on a hill cannot be hidden; nor does anyone light a lamp and put it under a basket, but on the lampstand, and it gives light to all who are in the house.  Let your light shine before men in such a way that they may see your good works, and glorify your Father who is in heaven.” ~ Matthew 5:14-16

Do all things without grumbling or disputing; so that you will prove yourselves to be blameless and innocent, children of God above reproach in the midst of a crooked and perverse generation, among whom you appear as lights in the world, holding fast the word of life… ~ Philippians 2:14-16

There was the true Light which, coming into the world, enlightens every man.  He was in the world, and the world was made through Him, and the world did not know Him.  He came to His own, and those who were His own did not receive Him.  But as many as received Him, to them He gave the right to become children of God, even to those who believe in His name, who were born, not of blood nor of the will of the flesh nor of the will of man, but of God.

And the Word became flesh, and dwelt among us, and we saw His glory, glory as of the only begotten from the Father, full of grace and truth.  John testified about Him and cried out, saying, “This was He of whom I said, ‘He who comes after me has a higher rank than I, for He existed before me.’”  For of His fullness we have all received, and grace upon grace.
For the Law was given through Moses; grace and truth were realized through Jesus Christ.  No one has seen God at any time; the only begotten God who is in the bosom of the Father, He has explained Him. ~ John 1:1-18