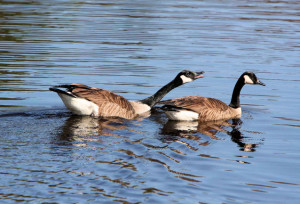 The crack of the slamming door upstairs snapped me back into reality.  I looked down at the boiling pot of noodles waiting for the thumping of feet that I knew were now trotting downstairs, to arrive at my side.  I braced myself for the conversation to come.

“Mooooom, Katie is being mean!  She slammed the door in my face.” Justin says in the exaggeration that only a 9 year old can exhibit.

“WAIT, Mom… NO!” Katie comes in screaming from upstairs, “Don’t listen to him!  He was bothering me mom.  Seriously!  When I told him to leave he wouldn’t.”

My thoughts briefly drifted to a time when these two actually loved each other ~ before the reality of teenage life set in making it uncool to love your brother, or the desire for a younger brother to be annoying to his ever maturing sister.

“YOU HIT ME!” Justin butted in.

“OK OK… enough… both of you go to your rooms and calm down and I will be up to talk to you.”

“BUT” they cheered simultaneously.

I am sure this conversation is resonating.  Why?  Because the blame game is something that we all do ~ any day of the week.  It is far easier to blame our own sin on someone else than take responsibility.  Whether we were wronged or not.  We have some sort of whacked out idea that others are responsible for our behaviors.

Take a fight with a spouse, a loved one, a friend.  A car accident, a divorce, or even your kid’s doing something wrong at school.  Think back to times where you have been called out or confronted.  Did you willingly take the blame or was it followed or even neglected by blaming your actions on the causes of others?

This is nothing new.  Even Adam and Eve did this in the beautiful garden that God had created for them.  We learn in Genesis 3 that when the fall came and God confronted Adam and Eve about their sin of doing the one thing God asked them not to do… they blame shifted.  Adam blamed Eve and ultimately God for giving him Eve and Eve blamed the serpent.  Were they correct in their assessments… well of course.  Satan tempted Eve, Eve tempted Adam.  But does that make it possible to blame shift?  Satan is still responsible for tempting Eve, Eve is responsible for eating the fruit and then tempting Adam with it, and Adam is responsible for taking the fruit from Eve.  Had they actually done what they were supposed to and stayed away from the fruit, then sin would not have entered the world.  They are all responsible.  The blame does not land on one alone.

There are stories upon stories in the bible of blame shifting since the time of the fall. None of us want to admit our wrongdoing… it ruins our pride.  But the only way truly to Heaven is to knock down pride, accept the cross we carry, ask forgiveness and repent.  Nowhere in God’s Word does it say ~ blame others.  Matthew 7:5 says the opposite: “Hypocrite! First remove the plank from your own eye, and then you will see clearly to remove the speck from your brother’s eye.”

This blame shifting is main stream and runs rampant not just within ourselves, but for those we love as well.  We have become so naive and complacent when it comes to our children.  We continue to believe that our children are inherently good, when we know that is far from the truth.  Yet, so many times we see that when parents are confronted about the wrongdoings or sin of their children their immediate response is to place blame (ie: other kids, the school, the teachers, the environment).  There are always other factors at play in our sin.  If an alcoholic walks into a bar and gets drunk… is it the bar’s fault for serving them alcohol?  If a child hits another child and in return a fight ensues, is it that one that threw the first fist to be to blame?  The list goes on and on… but the answer is easy.  NO!  Our sin is our fault ~ whether it was chosen due to the wrongdoings of someone else or not.  Someone else’s sin or actions does not give us a license to sin ourselves.  We are to be above reproach.  Yet, when we fall short (which we often will ~ daily) take responsibility for it.  Go before the Lord and repent, then try to make the situation right.

This had been a struggle with me for the longest time in my marriage.  Whenever I was confronted by anyone I would immediately feel awful for my actions and profusely apologize (even to my children)… but to my husband, this was not the case.  I always blamed my anger or actions on him.  I would say, “Well if you wouldn’t have…”.  I remember once he said to me, “You are so quick to apologize to everyone else, but not me, why?” I had to really think on that.  The answer was because when I felt wronged by him I justified my actions ~ my defense was more important that my love for God or my husband.  Don’t we always feel that way when we get in an argument… we feel right and therefore will enforce that with any means possible.  Not taking any responsibility for the chaos that might ensue from that.  This is sinful.  We are not doing ourselves (or the circumstance at hand) any favors by passing blame.  We are to attach to our own crosses so that God may work in us, not someone else.  If we continually pass blame we are not going to grow in the Lord for we will never see our sin for what it is… sin.  That goes for our children as well.  I think it is important, no matter the situation, to always let our children know where their blame lies.  They need to learn to accept responsibility.

One day my son came out of school crying hysterically.  I asked him what was the matter and he replied that he got in trouble by the teacher because she said he was talking.  I asked him if he had been talking and he said that he was, but only because the girl sitting next to him kept asking him questions and he was telling her to be quiet.  My response was… well then you were talking weren’t you and the punishment was justified.  He could have chosen to ignore her and she would have gotten in trouble on her own for talking.  He did not have to give in to the temptation to talk to her and then blame his getting trouble on her.  Was she at fault?  Yes, but was he as well?  Yes.  I told him this is a good lesson to learn for next time.  You obey the rules and let others be what they are going to be.  If we continually find blame with others for our children’s behavior, how will they ever learn to be productive adults?  How will they ever learn responsibility?  They won’t.

This may seem harsh, but I think we are becoming much too complacent in this day and age and we are geared to too much deflecting.  God calls us to humble ourselves, to find our own faults and to go to God with those!  It is good when our pride is broken and we fall on our faces before the Lord.  He came to comfort, seek and save the lost, not the prideful.

Of course this doesn’t mean we should be a “doormat” for others, but there is a right way to rebuke and deal with wrongful situations.  Adding more sin to it doesn’t help, justifying your wrongful response doesn’t make it right.

So next time before pointing out the wrongdoings of others that led to your demise… look at yourself and see where your blame lies.  Same goes for your children.  Look first at their sin and explain what taking responsibility is and what it looks like.  Then we can truly appreciate the sacrifice of Jesus Christ and the grace by which we are saved, for we are all but ugly sinners.

Romans 12:18-20 If it is possible, as much as depends on you, live peaceably with all men.  Beloved, do not avenge yourselves, but rather give place to wrath; for it is written, ‘Vengeance is Mine, I will repay,’ says the Lord. Therefore, “If your enemy is hungry, feed him; If he is thirsty, give him a drink; For in so doing you will heap coals of fire on his head.”

Being wronged does not give us a license to sin, but in all things we are given and commanded to use a license to love and endure.  Humble yourselves before the Lord and let God take care of the rest.

About the author:
Kristen Wells has a bachelors of science degree in biblical counseling and is the author of The Warring Soul.  She resides in California with her wonderful husband, Greg, her son, Justin, and her daughter, Katie.

Besides writing, Kristen enjoys reading, knitting, playing board games, substitute teaching at her kid’s school, teaching bible at Santa Clarita Christian School, and mentoring youth.  When she is not attending to the needs of her family, you can find Kristen curled up with a good book and a cup of coffee or fellowshiping with friends.  Above all, she lives to exemplify Christ in her everyday life and help others to find their way out of darkness.

← Good Words for the Walk!
Psalms To See Me Through Psalm 18: The Psalm Worth Repeating ~ Part II →