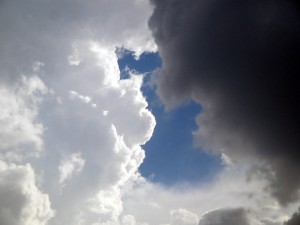 She holds hope steady, most days, careful with every step.  She keeps it close, far from eyes that would condescend, words that would weaken the flame of maybe… of some day.  For she is the story heard too many times.  Sympathy runs out, she has learned, and the hopeless are pushed aside.

It is too hard, too difficult to keep building up the possibility of change when the suffering stretches on without end, and so days have piled upon days ~ years upon years ~ and even those who love her speak no hope.

For hasn’t she used up all of their condolences, tried each piece of advice to find none that fit?  Solutions have run like water through her fingers.  Healers have only taken from her, leaving her with nothing except pain that only grows stronger.

And so she is irrelevant.  Avoided, for these past years, like one who is cursed.  She can’t blame anyone for it ~ for what good is a woman who cannot be present in her own life?  What future for a wife who cannot live as one with her husband?

There are no more answers.  Instead, they all whisper to each other the reasons for her suffering.  They come up with nothing, she is sure, that her husband has not already suggested.

There must be unconfessed trespasses.  Offenses gone too far for forgiveness.  Her heart must be impure.  He has asked again and again ~ what sin does she harbor? What lie does she live?

She understands that giving up hope will free him to do what he will with her ~ to free him from her.

It’s his desire and so she says goodbye, goodbye and a blessing for his future without her.

She tries not to think of him, tries to forget their first years together, when it seemed all she’d wanted ~ love and a family of her own – was hers.

But even in her mourning, she does not let go of the light, no ~ she holds it closer still.

**********
As she sips tea in the garden, her eyes on the stars, her mind is full of the rumors flying through the town.  Usually, she closes her ears to the latest gossip, the news of the people that has nothing to do with her.  But these weeks have held tale after tale of a Nazarene moving about from town to town ~ a man preaching of the Kingdom of Heaven, a man leaving healing in his wake.  Leprosy, paralysis, blindness, illness ~ ailment after ailment, gone with the touch of his hand.  Even those tortured by demons are at peace, at last free ~

A rush of blood from her body leaves her light-headed and she places the tea carefully to the side.  Oh, to be free.  She breathes deeply, considers the moon in its pale glory, and wonders where he is now, this man of miracles.

With his name on her lips, she prepares for the night’s sleep, alone.  It is a cold night and she shivers beneath the thin blanket.

Yes, some days the flame within her flickers low, with barely enough light to force her eyes open to face another day.

For who on this earth can change the ending to her story?

There is none.  She knows it quite well.

Her dreams are crowded.  There’s Sarah, laughing into her hands at the prophecy of a son… and, again, rocking Isaac in wrinkled arms against a bosom renewed with life.  There’s Hagar, crying out in the desert over her dying son… and a well bursting forth where there’d been only hot sand.  She dreams of Hannah, years gone by without a son, weeping before the Lord… only turning around with a pile of coats in her arms and a smile on her face for her Samuel.  There is Joseph, abandoned in a pit and sold as a slave, saving a nation.  And, there, the face of the prophet and his words exuberant in her ears ~ Surely he took up our infirmities and carried our sorrows…

She wakes, his name the first of her thoughts.

Who on this earth can change her?

She knows that she is only a woman.  One of many daughters of Israel, but does that mean He cares any less for her than He did for Hagar or Hannah?

Her favorite stories always have been of the mighty man beginning as murderer, the hero as frightened villager… the king as shepherd.

It seems to her that the I AM does not require a human of renown, only a human willing to believe in Him.  She thinks of the promises the prophets spoke, of the Messiah her people long for… could this Nazarene ~ one who casts out evil and takes sickness away with a word ~ be the promised One?

The Messiah, he is coming, this is all she knows.

I believe.  She says it loud, to the darkness and to the pain that keeps her from sleep.  Slowly, carefully, she moves to a window and looks again to the sky.  Again, she surrenders herself to the Almighty.  For even if she is to live all her days with this burden, He has been the comfort of her years and has not abandoned her despite the declarations of priests and family alike that she is unworthy to enter the temple.

Never could she say it aloud to anyone without accusations of blasphemy, but it seems to her that though she could not find admittance into the dwelling of the I AM, the I AM has come to where she dwells.  Only to Him can she attribute any peace of mind.  Only to Him can she credit her joy, even now, in the beauty of this world that disdains her.  “The Lord is my shepherd,” she says, “I shall not want.”

In the dim but steady light of the moon, she holds it deep within her, the glowing flame of faith that she refuses to live without.

Little Joshua knocks on the door, his basket of fruit nearly empty.

“There isn’t much left to buy,” he says with a shrug. “Too many people in the streets today. They were hungry.”

“Why were there so many?” she asks, keeping her careful distance.

He grins, sudden like a flash of lightning. “The prophet from Galilee is on his way through,” he says. “I saw him myself.”

“Jesus?” The name dances out of her mouth in a whisper.

Her skin wakens as if a cool wind washes over her and she knows only one thing: she must see him.