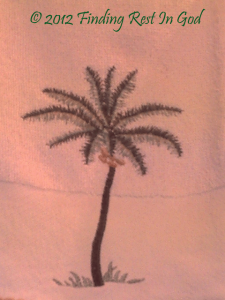 Oh Lord of Hosts how awesome you are all power in your hand
Come set us free, bring us home, heal, and redeem our land

The main story of Deborah that we will look at here, is found in Judges 1-4 NASB Judges 5: 1-31 NASB

Deborah is a woman whose name evokes honor upon its hearing.  We have all heard of Deborah and the heroic account in Judges; she is a beacon of hope for women.  Deborah is an example of what a woman of God should aspire to be.  She was the prophetess and judge of Israel.  The Bible makes mention of her husband, inferring she respects her covering.  She held a high and honorable position in Israel, appointed by God and submitted to Him as well.  The Bible says that Deborah sat underneath a palm tree to judge Israel.  Like Tamar, whose name means “palm”, she is a strong woman able to withstand trying circumstances.  The palm tree is a place of refreshing, a place for the people of Israel to come and hear the Word of the Lord and to receive wise counsel.

Deborah delivered the Word of God.  She was judge and prophetess in an oppressed country, held captive by a ruthless leader.  She was the only ray of hope for these tired, weary people.  We should learn from Deborah’s example as a light to shine the way to God for those who are oppressed and held captive by sin, whether they know it or not ~ they are waiting for their deliverance.

“In the events which were to follow, she would be the principle leader.  Among the people of her time ~ men and women alike ~ she was as exceptional as the palm tree in her land which was later named after her.  She was outstanding and unique.”[1]

Deborah’s palm tree was in Bethel, a city long associated with covenant and means House of God.  When Abram entered Canaan, he camped between Bethel and Hai in Gen. 12:8.  When he returned from Egypt, he came back to it, to call upon the name of the Lord (Gen. 13:4).  Jacob had a vision of the angels of God ascending and descending on the ladder to heaven (Gen. 28:10, 19); and on his return he again visited this place, where God talked with him (Gen. 35:1-15).

Ramah is the city associated with Rachel, whose tomb lies close to Bethlehem.  A prophecy in Jeremiah 31:5 and fulfilled in Matthew 2:18, concerns the slaughter of children at the hand of Herod ~ Rachael weeping for her children.  Deborah’s Palm Tree rests between these two cities, the House of God and the City of Weeping.  The people of Israel certainly were weeping and crying out to God and His deliverance is at hand.

Whom else should we run to?  In whom else should we rest our faith for deliverance?  Deborah trusted only in God, and the children of Israel trusted that God appointed her and they knew God’s Word was in her mouth.  When we trust in God, and are submitted to Him, His Word is in our mouth as well, to bring a word in season:

A man has joy in an apt answer, and how delightful is a timely word!  Proverbs 15:23 (NASB)

The Lord GOD has given Me the tongue of disciples, that I may know how to sustain the weary one with a word.  He awakens me morning by morning, He awakens My ear to listen as a disciple.  Isaiah 50:4 (NASB)

Deborah only trusted in God; she knew none else could deliver Israel from their oppression.  She instilled this into the children of Israel, as Mother in Israel, she had the well~being of Israel in her heart, and she taught them well.  Israel’s oppressors trusted in their strength and the number of chariots contained in the army:

“Sisera’s confidence was chiefly in his chariots.  But if we have ground to hope that God goes before us, we may go on with courage and cheerfulness.  Be not dismayed at the difficulties thou meetest with in resisting Satan, in serving God, or suffering for him; for is not the Lord gone before thee?  Follow him then fully.  Barak went down, though upon the plain the iron chariots would have advantage against him: he quitted the mountain in dependence on the Divine power; for in the Lord alone is the salvation of his people, Jeremiah 3:23.  He was not deceived in his confidence. When God goes before us in our spiritual conflicts, we must bestir ourselves; and when, by his grace, he gives us some success against the enemies of our souls, we must improve it by watchfulness and resolution.”[2]

Matthew Henry’s point is beautifully illustrated in Psalm 20:7:
Some boast in chariots and some in horses, but we will boast in the name of the LORD, our God. (NASB)

Deborah was commanded by the Lord to call for men from the tribes of Naphtali and Zebulun; Naphtali received the blessing of Jacob his father: “Naphtali is a hind let loose: he giveth goodly words” (Gen. 49:21).  Zebulun was one of the tribes that did not drive out the Canaanites and took little interest in public affairs.  Deborah mentions their change in her song: “Zebulun was a people who despised their lives even to death, and Naphtali also, on the high places of the field.  Their success in overtaking Sisera must have changed both tribes as they readily responded to the summons of Gideon later in Judges 6.  God is never done with us, even if we have failed before, God is there to redeem us, and use us for His purposes.  Don’t look back at your failures, just as these two tribes once failed, yet became pivotal in defeating Israel’s enemies.  God is not through with you.