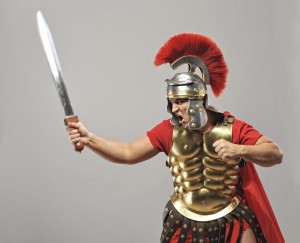 If you’ve seen Gladiator or any movies featuring big, scary Roman soldiers, then you probably have a visual of the massive breastplate they used to cover their chests and tummy areas. I’d say that the equivalent in our day is the bulletproof vest. Those vital organs are… well, vital. They’re necessary to our well-being. The heart, especially, is to be protected. It’s kind of like the brain ~ without it, your body is going to shut down.

And I think we’re all well aware of the emotional power of the heart. We use our heart as a symbol of the center and birthplace of our feelings… our hearts go out to people, they overflow with love, and they break. Our hearts are vulnerable. Proverbs 4:23 says Above all else, guard your heart, for it is the well-spring of life. One version says… everything you do flows from it.  King David said in Psalm 119:11 that he hid God’s word in his heart, that he might not sin against Him. You can be assured that if God’s word is in your heart, then good things are going to flow from it. Jesus Himself said that the pure in heart shall see God. (Matthew 5:8)

So how does righteousness protect our hearts from satan? If satan’s goal is to separate you from God, then a good tactic would be to drag your heart away from Him… so that you would sin against Him. And, as we know, with sin comes all sorts of bad effects. Ask anyone who has lived a season of unrighteousness… you’ll hear about guilt, sorrow, discontent. You know that saying “You’ve made your bed, now lay in it”?  That refers to something you need to understand ~ if you do wrong, if you choose to act outside of God’s word, then there will be consequences. An unhealthy heart leads to an unhealthy body… as, ultimately, a sinful life leads to death.

If you’re living righteously, which means living in obedience to God’s word, then satan isn’t going to be able to get to you. Any attempts at drawing your heart into sin will be unsuccessful if you’re standing in the power of God. Like we talked about the other day ~ He gives us a way out of sin. He gives us deliverance and salvation. Righteous living protects you from the pitfalls of sin. Even if satan accuses you of doing wrong (which he does make accusations against us to God, according to Revelation 12:10-11), he won’t be able to shake you. That portion of Revelation goes on to say that they overcame him by the blood of the Lamb, and by the word of their testimony!

Which brings me to my favorite aspect of this breastplate.  If you’re like me, you’re thinking ~ wow. My efforts at righteousness… they sometimes fail. Even at my best, I still fall short of His holiness. If we need righteousness to protect our hearts, then maybe I’m in trouble. Good news: it’s not our human attempts at being good that makes us righteous before God. In fact, Isaiah refers to those attempts as filthy rags. 1 Corinthians 1:30-31 is our hope and deliverance: But of Him are you in Christ Jesus, who of God is made unto us wisdom, and righteousness, and sanctification, and redemption: that, according as it is written, He that glories, let him glory in the Lord.

When we put our lives in His capable hands, Jesus Himself covers us with His righteousness. How awesome is that?? To put it in the simple way that made my day ~ Jesus is the protector of our hearts. So when we victoriously wear a breastplate of righteousness, it is by His mercy and for His glory!

We go out into spiritual battles with Him… He is truly Jesus, Messiah. God with us and for us… and if God be for us, who can stand against us? (Romans 8:31)