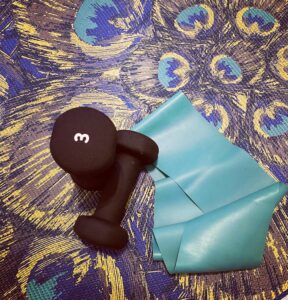 The reality?  It didn’t come naturally, so it was easier to not try.  I was easily embarrassed, prone to shame when I failed or fell short, and uncomfortable in my own skin.

But I’ve been on a journey as a grown-up to change my narrative.  For years, I’ve been trying to un-learn the bent towards “can’t” and to pull up the deep roots of “not good enough” and to un-do the mantra of “incapable”.

God gave me this body and it’s only one part of who I am ~ but, good gracious, we do not get to exist on some non-physical plane, so we can’t pretend that it doesn’t make a difference to us how we feel in our bodies.  We move, breathe, worship, serve… LIVE in our bodies.

And when I took ownership of that truth, when I decided to be present in my own skin and to pursue health in a way I never had before thought I COULD… well, I started to learn more than just physical movement.  I learned about how everything flows from our core strength, from our center.  I learned that what I’d written off as not for me ~ movement, speed, the rush of oxygen in my lungs — I actually ENJOYED and it brought me new appreciation for TRYing even when it’s hard, of challenging myself and not always achieving… but learning how to tackle being uncomfortable for the sake of growth.  I learned about the power of alignment.  I’ve learned that I can change.

Cut to yesterday, when I was talking to my sister about changing up my routine and hearing her say…”You should up your weights.”

The barre program I am doing suggests 2 pound weights because they’re used in long periods of cardio/movement versus actual “weight lifting”.

What I said to my sister was this ~ but I can barely get through with the 2 pounds.

My next set up is only a 3… but I don’t think I can do it, even with the slight addition.

“You are stronger than what your brain is telling you,” she said. “Just try.”

When I started the class yesterday, I fully expected to put them down or switch to the lighter weights sooner rather than later. Except…I didn’t. My body WAS stronger than what my mind was telling me. I was underestimating what I could handle.

I share all of that to say this ~ after all that time working on my progress, both mentally and physically, my default was still “can’t”.  I needed another push into CAN.  I needed my sister’s belief in me.  I needed the encouragement.

I could waste time feeling disappointed that I fell into an old pattern and needed the help, or I can remember that growth is never overnight.  It is never easy.  It is always proactive.  Especially for the long-traveled paths in our brains?  Re-routing and leaning into the truth of who we are takes commitment and an every day choice to believe in the yes and amen of our lives.

Right now, we are all on different paths ~ emotionally, mentally, physically, relationally.  And as 2021 has already shown us ~  there are always going to be unexpected challenges.  There are always going to be circumstances that test who we are, always days that push us to our limits and make us wonder ~ am I strong enough to do what I’m called to do in this moment?

I’m here to say to you what I needed my sister to say to me, just in case you also need to hear it:

You are stronger than what your brain is telling you.

Whatever that next right thing is that you haven’t pursued because a little voice is saying you’re not able?

Just try.  Take a step of faith and try.

Here’s where the physical example breaks down a little bit ~ because, in reality, sometimes we CAN’T handle what life brings or what God asks of us ~ at least, not on our own.

But we’re not alone.  We live from the source of God’s own Spirit within us.  In the upside down logic of the gospel, we offer Him our weakness and He replaces it with His perfect strength.  He enables us.  He finishes the good work He begins in us. (Philippians 1:6)
He promises to do even more than we can imagine. (Ephesians 3:20)

If the dream you are after is aligned with His heart?  I am (with so much love!) pushing you into CAN.  We have to let go of the inner narrative that steers us toward ‘can’t’, to take ownership of the truth that the old things have passed away and we have been made NEW.

Your past you no longer dictates the today you or the tomorrow you.  Our identity of “incapable”, “not good enough”, and “can’t” has been completely remade in the image of the One who says all things are possible (Mark 9:23), the One who calls us more than conquerors (Romans 8:37), the One who called the dead to life and equipped us to go and do likewise.

Yet I know this because I FEEL this ~ It IS easier to stay the same.  It is easier to remain comfortable.  It is easier to do what we know we can do, with our own strength that we have tested in our own ways.  It’s easier to just stay with two pound weights because we know that’s what we can handle.

So we have to do decide: what do we want?

The ease and comfort of what we can do in our own natural power or the supernatural move of God in our lives?

It is only in picking up what He has called us to do, even when we think it looks too heavy or hard, that we learn what He can do in & through us.

It won’t be a perfect process.  But we have to start where we are.

What I’m saying, simply, is this ~ let’s make our next choices based in hope.  In faith.  In the knowledge that, as believers, we have already been given everything we need to do what we are called to do. (2 Peter 1:3)  We are one with God and nothing is too hard for Him.

In this world of ours that is hurting, where people are in need in so many ways… we are called to be hope-bearers, change-makers, love-in-action.  He wants to work through us for GOOD.  He has put us on mission to declare salvation, to heal, to reconcile, to be peacemakers, to see justice flow like a mighty river, to set captives free!

Whatever the next step for you might be… it’s time to try, friend.  It’s time for us to pick up the three pound weights.  Maybe even the fives.

I want to see what God can do.

← Psalms To See Me Through: Psalm 29 The Lord Sits Enthroned Over The Flood
Honoring Dr. Martin Luther King, Jr. ~ Quotes →