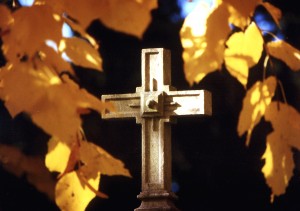 But God, being rich in mercy, because of His great love with which He loved us, even when we were dead in our transgressions, made us alive together with Christ (by grace you have been saved), and raised us up with Him, and seated us with Him in the heavenly places in Christ Jesus, so that in the ages to come He might show the boundless riches of His grace in kindness toward us in Christ Jesus.  For by grace you have been saved through faith; and this is not of yourselves, it is the gift of God; not a result of works, so that no one may boast.  For we are His workmanship, created in Christ Jesus for good works, which God prepared beforehand so that we would walk in them. ~ Ephesians 2:4-10

But you are a chosen generation, a royal priesthood, a holy nation, His own special people, that you may proclaim the praises of Him who called you out of darkness into His marvelous light;  for you once were not a people, but now you are the people of God; you had not received mercy, but now you have received mercy.  Dear friends, I urge you, as sojourners and exiles, to abstain from sinful desires, which wage war against your soul. ~ 1 Peter 2:9-11

…giving thanks to the Father, who has qualified us to share in the inheritance of the saints in light.  For He rescued us from the domain of darkness, and transferred us to the kingdom of His beloved Son, in whom we have redemption through His blood, the forgiveness of sins. ~ Colossians 1:12-14

For you have not received a spirit of slavery leading to fear again, but you have received a spirit of adoption as sons and daughters by which we cry out, “Abba! Father!”  The Spirit Himself testifies with our spirit that we are children of God, and if children, heirs also, heirs of God and fellow heirs with Christ, if indeed we suffer with Him so that we may also be glorified with Him. ~ Romans 8:15-17

See how great a love the Father has given us, that we would be called children of God; and in fact we are…  Beloved, now we are children of God, and it has not appeared as yet what we will be.  We know that when He appears, we will be like Him, because we will see Him just as He is. ~ 1 John 3:1

For God so loved the world, that He gave His only Son, so that everyone who believes in Him will not perish, but have eternal life.  For God did not send the Son into the world to judge the world, but so that the world might be saved through Him. ~ John 3:16-17