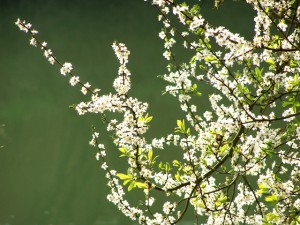 But you, brethren, are not in darkness, so that this Day should overtake you as a thief.  You are all sons of light and sons of the day. We are not of the night nor of darkness.  So then let us not sleep as others do, but let us be alert and sober.
For those who sleep, sleep at night, and those who get drunk are drunk at night.  But let us who are of the day be sober, putting on the breastplate of faith and love, and as a helmet the hope of salvation.  For God has not destined us for wrath, but for obtaining salvation through our Lord Jesus Christ, who died for us, so that whether we are awake or asleep, we will live together with Him.  Therefore encourage one another and build up one another, just as you also are doing. ~ 1 Thessalonians 5:4-11

This is the message we have heard from Him and announce to you, that God is Light, and in Him there is no darkness at all.  If we say that we have fellowship with Him and yet walk in the darkness, we lie and do not practice the truth; but if we walk in the Light as He Himself is in the Light, we have fellowship with one another, and the blood of Jesus His Son cleanses us from all sin.  If we say that we have no sin, we are deceiving ourselves and the truth is not in us.  If we confess our sins, He is faithful and just to forgive us our sins and to cleanse us from all unrighteousness. ~ 1 John 1:5-9

For behold, the day is coming, burning like a furnace;
and all the arrogant and every evildoer will be chaff;
and the day that is coming will set them ablaze,”
says the Lord of hosts,
“so that it will leave them neither root nor branch.
But for you who fear My name,
the Sun of righteousness will rise with healing in its wings;
and you will go forth and skip about like calves from the stall.
~ Malachi 4:1-2

Then Jesus again spoke to them, saying, “I am the Light of the world; he who follows Me will not walk in the darkness, but will have the Light of life.” ~ John 8:12

There was the true Light which, coming into the world, enlightens every man.  He was in the world, and the world was made through Him, and the world did not know Him.  He came to His own, and those who were His own did not receive Him.  But as many as received Him, to them He gave the right to become children of God, even to those who believe in His name,  who were born, not of blood nor of the will of the flesh nor of the will of man, but of God.

And the Word became flesh, and dwelt among us, and we saw His glory, glory as of the only begotten from the Father, full of grace and truth.  John testified about Him and cried out, saying, “This was He of whom I said, ‘He who comes after me has a higher rank than I, for He existed before me.’”  For of His fullness we have all received, and grace upon grace.  For the Law was given through Moses; grace and truth were realized through Jesus Christ.  No one has seen God at any time; the only begotten God who is in the bosom of the Father, He has explained Him.
~ John 1:1-18

← With This in Mind, Again ~ “findings” by Rhea
Choosing Priorities →