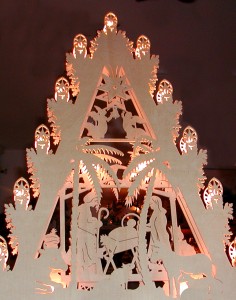 In the mini-series Jesus of Nazareth (1977), Herod sent out his murderous riders to slay the male children two years and younger, in a vain attempt to purge the earth of a threatening Messiah-King.  In the after-math, among the wails of despair by the mothers that witnessed the cruel and brutal execution of their babies, many ripped from their arms, walks a lone elder speaking the fulfillment of God’s Word in the horrific scene before him:

A voice is heard in Ramah,
Lamentation and bitter weeping.
Rachel is weeping for her children;
she refuses to be comforted for her children,
because they are no more.
~ Jeremiah 31:15 (NASB)

The horrific tragedy these mothers of Israel suffered, coupled with my love for the Word, bring tears to my eyes each time I watch that scene.  God’s Word is not always sweet, but it is always true.

The Old Testament is not plan “A” to toss aside with the advent of the New.  One cannot kiss the New Testament without first embracing the Old.  The Old Testament speaks to what will be in the New; one cannot discard either Testament, they are the thread that weaves together God’s tapestry ~ His redemption story:

“A devout Hebrew scholar has pointed out that the Old Testament is a book of consonants without vowels, as Hebrew students know.  But Christ came as the Alpha and the Omega, the initial and final vowel of the New Testament Language, to all, the vowel points to the old revelation; to be the interpreter of difficulties and the filler of gaps.  And so, as Luther exhorts, ‘In the Word thou shouldest hear nothing else than thy God speaking to thee.’”1

It is my desire to lay before you the prophecies in the Old Testament concerning Christ, and the accomplishment of the prophecies displayed in Jesus of Nazareth.  I pray that as Scripture and the wonders contained therein are exposed, we the Church would renew our revelation of Christ, and present to the world a Complete Christ.

I begin our journey through prophecy with the foretelling of His birth.

The Seed Resulting In Birth2
The first Messianic prophecy is in Genesis 3:15 ~

Now the birth of Jesus Christ was as follows: when His mother Mary had been betrothed to Joseph, before they came together she was found to be with child by the Holy Spirit.  ~ Matthew 1:18 (NASB)

Now the promises were spoken to Abraham and to his seed.  He does not say, “And to seeds,” as referring to many, but rather to one, “And to your seed,” that is, Christ.
~ Galatians 3:16 (NASB)

Why the Law then?  It was added because of transgressions, having been ordained through angels by the agency of a mediator, until the seed would come to whom the promise had been made. ~ Galatians 3:19 (NASB)

And the LORD appeared unto Abram, and said, “Unto thy seed will I give this land” and there builded he an altar unto the LORD, who appeared unto him. ~ Genesis 12:7 (KJV)

Now the promises were spoken to Abraham and to his seed.  He does not say, “And to seeds,” as referring to many, but rather to one, “And to your seed,” that is, Christ.
~ Galatians 3:16 (NASB)

Now therefore, thus you shall say to My servant David, ‘Thus says the LORD of hosts, “I took you from the pasture, from following the sheep, to be ruler over My people Israel… When your days are complete and you lie down with your fathers, I will raise up your descendant after you, who will come forth from you, and I will establish his kingdom.'”
~ II Samuel 7: 8,12

Paul, a bond-servant of Christ Jesus, called as an apostle, set apart for the gospel of God… concerning His Son, who was born of a descendant of David according to the flesh. ~ Romans 1:1,3 (NASB)

Therefore the Lord Himself will give you a sign: Behold, a virgin will be with child and bear a son, and she will call His name Immanuel.  ~ Isaiah 7:14 (NASB)

For a child will be born to us, a son will be given to us;
And the government will rest on His shoulders;
And His name will be called Wonderful Counselor,
Mighty God, Eternal Father, Prince of Peace.
~ Isaiah 9:6 (NASB)

And behold, you will conceive in your womb and bear a son, and you shall name Him Jesus… Mary said to the angel, how can this be, since I am a virgin?  The angel answered and said to her, “The Holy Spirit will come upon you, and the power of the Most High will overshadow you; and for that reason the holy Child shall be called the Son of God.”
~ Luke 1: 31, 34, 35 (NASB)

Now the birth of Jesus Christ was as follows: when His mother Mary had been betrothed to Joseph, before they came together she was found to be with child by the Holy Spirit. ~ Matthew 1:18

Behold, a virgin shall be with child, and shall bring forth a son, and they shall call his name Emmanuel, which being interpreted is, God with us. ~ Matthew 1:23

The scepter shall not depart from Judah,
nor the ruler’s staff from between his feet,
Until Shiloh comes,
and to him shall be the obedience of the peoples.
~ Genesis 49:10 (NASB)

I see him, but not now;
I behold him, but not near;
A star shall come forth from Jacob,
A scepter shall rise from Israel,
And shall crush through the forehead of Moab,
And tear down all the sons of Sheth.
~ Numbers 24:17 (NASB)

So you are to know and discern that from the issuing of a decree to restore and rebuild Jerusalem until Messiah the Prince there will be seven weeks and sixty-two weeks; it will be built again, with plaza and moat, even in times of distress.  Then after the sixty-two weeks the Messiah will be cut off and have nothing, and the people of the prince who is to come will destroy the city and the sanctuary.  And its end will come with a flood; even to the end there will be war; desolations are determined. ~  Daniel 9: 25, 26 (NASB)

Behold, I am going to send My messenger, and he will clear the way before Me.  And the Lord, whom you seek, will suddenly come to His temple; and the messenger of the covenant, in whom you delight, behold, He is coming,” says the LORD of hosts. ~ Malachi 3:1 (NASB)

Now in those days a decree went out from Caesar Augustus, that a census be taken of all the inhabited earth… And she gave birth to her firstborn son; and she wrapped Him in cloths, and laid Him in a manger, because there was no room for them in the inn.
~ Luke 2: 1,7 (NASB)

For today in the city of David there has been born for you a Savior, who is Christ the Lord. ~ Luke 2: 11 (NASB)

But when the fullness of the time came, God sent forth His Son, born of a woman, born under the Law. ~ Galatians 4:4 (NASB)

This is only the beginning; we have many more prophecies concerning His birth to reveal.

I pray that as you read these prophetic utterances and see their fulfillment in the New Covenant, that the truth of God’s Word will be a fresh wind beneath your wings.  I pray you will acquire a new and fresh love for the Holy Word, and for your Redeemer ~ Jesus Christ.

1 comment for “The Wonders of God’s Word: Prophecies of Christ’s Birth”

But I will sing of Your power;
Yes, I will sing aloud of Your mercy
in the morning;
For You have been my defense
And refuge
in the day of my trouble.
To You, O my Strength,
I will sing praises;
For God is my defense,
My God of mercy.
~ Psalm 59:16-17

Therefore be careful how you walk,
not as unwise, but as wise,
making the most of your time,
because the days are evil.
So then do not be foolish,
but understand
what the will of the Lord is.
And do not get drunk with wine,
for that is dissipation,
but be filled with the Spirit,
speaking to one another in psalms
and hymns and spiritual songs,
singing and making melody
with your heart to the Lord;
giving thanks always for all things
to God the Father in the name
of our Lord Jesus Christ;
and be subject to one another
in the fear of Christ.
~ Ephesians 5:15-20