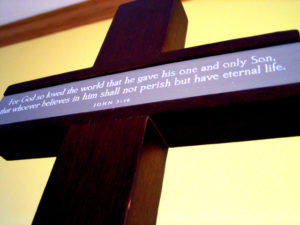 Every word of God is tested;
He is a shield to those who take refuge in Him.
Do not add to His words
Or He will reprove you, and you will be proved a liar.
~ Proverbs 30:5-6

But Jesus answered him, saying, “It is written, ‘Man shall not live by bread alone, but by every word of God.’” ~ Luke 4:4

For the bread of God is He who comes down from heaven and gives life to the world. ~ John 6:33

Jesus said to them, “I am the bread of life; he who comes to Me will not hunger, and he who believes in Me will never thirst”. ~ John 6:35

“I am the living bread that came down out of heaven; if anyone eats of this bread, he will live forever; and the bread also which I will give for the life of the world is My flesh.” ~ John 6:51

“For God so loved the world, that He gave His only begotten Son, that whoever believes in Him shall not perish, but have eternal life.  For God did not send the Son into the world to judge the world, but that the world might be saved through Him.  He who believes in Him is not judged; he who does not believe has been judged already, because he has not believed in the name of the only begotten Son of God.  This is the judgment, that the Light has come into the world, and men loved the darkness rather than the Light, for their deeds were evil.  For everyone who does evil hates the Light, and does not come to the Light for fear that his deeds will be exposed.  But he who practices the truth comes to the Light, so that his deeds may be manifested as having been wrought in God.” ~ John 3:16-21