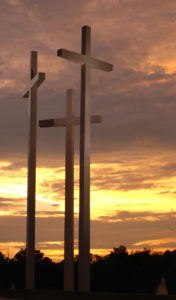 Who has believed our report?
And to whom has the arm of the Lord been revealed?
~ Isaiah 53:1

And they remembered His words, and returned from the tomb and reported all these things to the eleven and to all the rest.  Now they were Mary Magdalene and Joanna and Mary the mother of James; also the other women with them were telling these things to the apostles.  But these words appeared to them as nonsense, and they would not believe them.  But Peter got up and ran to the tomb; stooping and looking in, he saw the linen wrappings only; and he went away to his home, marveling at what had happened.
~ Luke 24:8-12

And behold, two of them were going that very day to a village named Emmaus, which was about seven miles from Jerusalem.  And they were talking with each other about all these things which had taken place.  While they were talking and discussing, Jesus Himself approached and began traveling with them.  But their eyes were prevented from recognizing Him.

And He said to them, “What are these words that you are exchanging with one another as you are walking?”

And they stood still, looking sad.
One of them, named Cleopas, answered and said to Him, “Are You the only one visiting Jerusalem and unaware of the things which have happened here in these days?”

And He said to them, “What things?”

And they said to Him, “The things about Jesus the Nazarene, who was a prophet mighty in deed and word in the sight of God and all the people, and how the chief priests and our rulers delivered Him to the sentence of death, and crucified Him.  But we were hoping that it was He who was going to redeem Israel.  Indeed, besides all this, it is the third day since these things happened.  But also some women among us amazed us.  When they were at the tomb early in the morning,  and did not find His body, they came, saying that they had also seen a vision of angels who said that He was alive.  Some of those who were with us went to the tomb and found it just exactly as the women also had said; but Him they did not see.”

And He said to them, “O foolish men and slow of heart to believe in all that the prophets have spoken!  Was it not necessary for the Christ to suffer these things and to enter into His glory?”

Then beginning with Moses and with all the prophets, He explained to them the things concerning Himself in all the Scriptures.
~ Luke 24:13-27

For He shall grow up before Him as a tender plant,
And as a root out of dry ground.
He has no form or comeliness;
And when we see Him,
There is no beauty that we should desire Him.
He is despised and rejected by men,
A Man of sorrows and acquainted with grief.
And we hid, as it were, our faces from Him;
He was despised, and we did not esteem Him.

Surely He has borne our griefs
And carried our sorrows;
Yet we esteemed Him stricken,
Smitten by God, and afflicted.
But He was wounded for our transgressions,
He was bruised for our iniquities;
The chastisement for our peace was upon Him,
And by His stripes we are healed.
All we like sheep have gone astray;
We have turned, every one, to his own way;
And the Lord has laid on Him the iniquity of us all.

He was oppressed and He was afflicted,
Yet He opened not His mouth;
He was led as a lamb to the slaughter,
And as a sheep before its shearers is silent,
So He opened not His mouth.
He was taken from prison and from judgment,
And who will declare His generation?
For He was cut off from the land of the living;
For the transgressions of My people He was stricken.
And they made His grave with the wicked ~
But with the rich at His death,
Because He had done no violence,
Nor was any deceit in His mouth.

Yet it pleased the Lord to bruise Him;
He has put Him to grief.
When You make His soul an offering for sin,
He shall see His seed, He shall prolong His days,
And the pleasure of the Lord shall prosper in His hand.
He shall see the labor of His soul, and be satisfied.
By His knowledge My righteous Servant shall justify many,
For He shall bear their iniquities.
Therefore I will divide Him a portion with the great,
And He shall divide the spoil with the strong,
Because He poured out His soul unto death,
And He was numbered with the transgressors,
And He bore the sin of many,
And made intercession for the transgressors.
~ Isaiah 53:2-11

And they got up that very hour and returned to Jerusalem, and found gathered together the eleven and those who were with them, saying, “The Lord has really risen and has appeared to Simon.”  They began to relate their experiences on the road and how He was recognized by them in the breaking of the bread.

While they were telling these things, He Himself stood in their midst and said to them, “Peace be to you.”

Now He said to them, “These are My words which I spoke to you while I was still with you, that all things which are written about Me in the Law of Moses and the Prophets and the Psalms must be fulfilled.”  Then He opened their minds to understand the Scriptures, and He said to them, “Thus it is written, that the Christ would suffer and rise again from the dead the third day, and that repentance for forgiveness of sins would be proclaimed in His name to all the nations, beginning from Jerusalem.  You are witnesses of these things.  And behold, I am sending forth the promise of My Father upon you; but you are to stay in the city until you are clothed with power from on high.”

And He led them out as far as Bethany, and He lifted up His hands and blessed them.  While He was blessing them, He parted from them and was carried up into heaven.  And they, after worshiping Him, returned to Jerusalem with great joy, and were continually in the temple praising God.
~ from Luke 24

← Because He is…
Psalm To See Me Through: Psalm 27 ~ Courageous Trust →