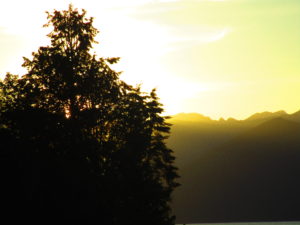 The church has been moving forward at a steady pace ever since the resurrection of Jesus.  A lot of things have changed since those early days of Christianity, but now, things are beginning to pick up.   We’re now moving forward faster than we ever have before, as we look forward to the return of the Messiah.

Hebrews 11 details our heroes and heroines of faith along with their accomplishments.  They obeyed God and performed the miraculous, just like we can.  There have been such great changes in the body of Christ since those times, and I believe that there is more change to come.  Hebrews 12 continues the story, admonishing us to keep our eyes on Jesus, the one Who is the Author and the Perfecter of our faith.  I’ll be the first to admit that I always need divine strength in order to continually keep my eyes on Jesus.  Because sometimes when life comes at me, it comes at me hard and fast.  Sometimes, the things that I thought were going to last didn’t.  The people I thought would be around, they aren’t.  The situations I expected to change, they haven’t.  Well … not yet, anyway.
I continually need strength from God.

Hebrews 12:1 shows us one way to get that much needed strength: We must consider those heroes and heroines of faith who have gone on before us.  Those whose mantles
of faith were left behind in the earth.  Think about Abraham, Sarah, Noah, Joseph, and Moses.  Think about the women who “received dead bodies raised to life again.”
(Hebrews 11:35)  Think about Enoch and Isaac.  Read their stories, encourage yourself, and develop spiritual strength, from those who are among the great “cloud of witnesses.”

The spiritual mantles that these heroes of faith held were not lost when they transitioned.  God made provision for His people to continue on then, just as He has done for us now.  We, too, can continue on in faith, with the message He has given to us.  2 Kings 2:9-14 tells the story of Elisha as he saw the chariots of fire come to take his mentor, Elijah, up
to heaven.  As Elisha watched him go, he saw and received the mantle that Elijah left behind.  He was then able to use that same mantle in the performing of miracles even after Elijah left.

In the same way, there have been great men and women of of God who have also gone on to be with Jesus in heaven.  Most recently, we heard about the going home of Billy Graham, whose ministry changed the world.  His death didn’t take God by surprise.  No, God has been training, preparing, and raising up men and women of faith to carry on the work of the great commission.  He has men and women that will continue to carry the mantles that have been left behind.  God has no plans to leave His church undone, with things and people missing, broken, or lacking.

It is clear that we are living in a time of change, and much unrest.  We have only to turn on the television or read a few lines of a newspaper article, to see that things all over the world are coming to a head, and in many cases, they’re boiling over.  Chaos is often the end result.  But as we consider Jesus, not only will we be able to see our faith perfected, we will also be able to better accommodate the changes that are occurring in our lives, in the church, and in the world.  We will be at peace and at rest, even if there is chaos all around us.

I only saw my father on two occasions.  Once when I was 7 years old, and then in 2007 as he lay in his coffin.  After his funeral, on the flight back home, I believe that the Lord showed me that my father’s mantle of prayer was being added to mine and that my prayer life would change.  And it did.  I remember being stronger and bolder as I prayed, and I could tell that spiritual things were beginning to change for me, for the better.

Now, with the passing of Billy Graham, and that mantle being laid on the body of Christ, I believe that we’ll see things that have never happened before, and we will be able to do things that we have never done before.  We will continue to see great change in the church, and in the world.  So this is the perfect time, as we begin to enter the new season of Spring, to pull out, or begin to call to remembrance, the prophetic words that were spoken to you, about you, or over you.  Maybe you thought that those words would never come to pass.  Or, maybe you thought that they really weren’t from God at all!  Either way, this is your season to come up a little bit higher in your faith, as well as in your mind, and begin to believe God again for those words to come to pass.  What has been spoken of you and me by God, shall come to pass!

Lift those words up before the Throne of Grace in prayer.  Let the Father know exactly how you feel.  If you’re not in the mood, tell Him!  He already knows it anyway.  Tell Him that you are weary, tell Him that you feel like you’ve had enough, and that you didn’t feel like being bothered with it anymore.  But also tell Him that you’re willing to be made willing!  That’s all He needs to see and hear, that we’re somehow once again willing to see His Word come to pass in our lives.

There is no detail too small, no situation too confusing, and no problem that is outside of God’s divine range of motion.  He can handle it all.  He will handle it all.  It begins when we surrender and say, “Lord, here we are. We’re willing to see your Word manifest for us.  Have your way, oh God!”

Let the mantles of those who have gone on, stir you up in faith and success, because God fully intends to take care of His church, one way or another.  You and I will see those words spoken over our lives come to pass!

Sherma-Jacqueline is a Bible Teacher, Conference Speaker, Mentor, and Passionate Writer.  She has always enjoyed writing, and started off by keeping a diary in her teens.  She began prayer journaling over 18 years ago and began teaching on Prayer 12 years ago.  Her desire is to see the women of God rise up and be all that they’re called to be: Bold, Strong, Courageous and overflowing with His Word!

← The Rev. Billy Graham and the Unity of the Church
The Attributes of God: Love →