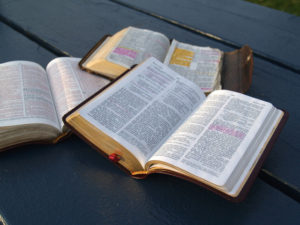 We last saw Abram in a moment of victory.  With improbable odds, he took on a rescue mission to save his nephew, Lot, from kings who had conquered and kidnapped the people of Sodom.

Despite the greater number of men, weapons, and experience that his men faced, Abram was victorious in the battle.

We pick up after the victory, when Abram meets Melchizedek ~ priest of the Most High God, King of Salem (a place later to be called Jerusalem).

And he gave him a tithe of all.

Now the king of Sodom said to Abram, “Give me the persons, and take the goods for yourself.”

But Abram said to the king of Sodom, “I have raised my hand to the Lord, God Most High, the Possessor of heaven and earth, that I will take nothing, from a thread to a sandal strap, and that I will not take anything that is yours, lest you should say, ‘I have made Abram rich’—except only what the young men have eaten, and the portion of the men who went with me: Aner, Eshcol, and Mamre; let them take their portion.”

As I’ve thought about this moment in time, I tried to put myself in Abram’s shoes.  This is not a period of time in which many know the Most High God.  Abram came from a family and a place that worshiped idols… we aren’t told that he encountered anyone else on his journey so far who professed a relationship with the God he had come to know.

What encouragement, then, it must have been for Melchizedek to come to him.  What unexpected grace and confirmation of God’s faithfulness it was to have this priest of the Most High minister to him.

We can’t know what Abram was feeling or what, exactly, his heart was in need of after facing such a battle to win back his family.

Melchizedek gave nourishment for body and soul ~ bread and wine, blessing, reminder of the One who had given Abram the victory.

And so when the king of Sodom offered Abram the spoils of battle, Abram said no.  He knew the One who was making a way for him in this strange new land.  He was seeing, day by day, the power and goodness of his God… and he wanted no confusion about the source of his strength.

I believe that our Father takes delight in preparing good things for us, in being the One we look to for what we need.  Whether we are in the heat of battle, in a place of peace, in a moment of victory, in the day-to-day paths we walk ~ God is the One who nourishes us, who knows what we need before we can even realize it ourselves.

God sent Melchizedek to meet Abram, to refresh and encourage him… as I thought about how loving this was, it dawned on me ~ for you and I, God came Himself.  Through the work of Christ on the cross and the coming of the Holy Spirit into our lives, we have an ever-abiding comfort and sustaining power.  The Father looked ahead and saw our needs… and for us, He prepared an open invitation to His table, to His Word, to His presence, to the throne of Grace.

This is the love of our God toward us ~ He Himself became our bread and wine, our living water that satisfies every thirst, our blessing, our portion.

It’s my hope that we will center our trust and our dependence upon Him so that we will understand, more and more, His faithfulness to sustain us… and when anyone looks at our lives, they will know ~ everything we have and everything we are has come from our Father.

← Thanksgiving Theology For 2017
Catch the Wind →