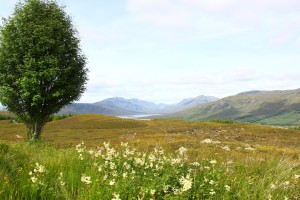 My maternal grandmother Addie was not an educated woman, but she was intelligent and sensitive.  By nature she was a poet.  She often wrote poems which were, as literary pieces, very naive and simple ~ but they expressed deep feelings and the longings of her heart.  When Grandma died, my mother gave me two or three of these poems, and I recently came across them again as I was sorting through old papers.  I had read them as a young woman, and while they were sweet and made me remember Grandma with love, at the time I hadn’t really paid that much attention to what they were saying.  This time as I read, I heard her.  I was filled with remorse that I hadn’t understood her earlier.  She was expressing things that, as an old woman, I now understand.  I have experienced similar things, and I feel sorrow that her feelings had not been heard and acknowledged, and that there had been no one to comfort her.

My grandmother had a hard life.  She and Grandpa had been married on Christmas Day, 1902.  My grandfather had worked in the coal mines in Illinois and Kentucky, and there had never been much money.  Grandma had given him six children who needed to be fed and clothed and get some kind of education, but they had drifted from place to place to find work ~ sometimes in towns so small there was no school, and so the children had simply put further education on hold until the next move.  Their lives were made even harder by the fact that my grandfather was a binge drinker, and very resistant to anyone else telling him what to do, such as a boss.  He was stubborn and rebellious about authority.  He was a “good-old-boy”, and much preferred sitting around swapping stories with his buddies, and going hunting and fishing instead of showing up at work.

In spite of all provocation, grandma took it silently and with fortitude, good grace, and even with humor.  She was the glue that held everything together.  She and her children found fun in small things, and they all adored her.  When they were all grown, they still felt a devotion toward her that any mother would envy.  As I read her poems, I could understand why, and for the first time in my life, felt an affinity towards her I had never felt in her lifetime.

She and I had a lot in common.  She had a desire for something higher; not in a snobbish way, but in the recognition of truth and beauty and a longing for something that would transcend the poverty and the struggle and discouragement she felt.  Reading her poems, I think I see in them an innate longing for God.

I realize that I never really talked with my grandmother.  She was there, and the grownups all talked together.  We children played around them, but never had any conversations with them.  Even after I grew up I never found time to sit alone with her and ask her what she thought, and what her life had been like as a child, and about her brothers and sisters and their families.  I wonder if she wanted something more from her grandchildren.  I wish I had been more sensitive and had less of the innate self-absorption of most teenagers.

In contrast, I had tried to talk with my great-grandmother Lavinia, my grandfather’s mother.  Lavinia had been a child during the Civil War, and her father, my great-great grandfather, had served as a sergeant in the Union Army and had lost a leg at the Battle of Tunnel Hill, GA.  Although he had two amputations on the leg, the wound eventually killed him through a smoldering infection which turned gangrenous, and spread through his body.  My great-great grandmother Isabelle had to find a way to raise a large family of children, and had to go to court to get a war widow’s pension of $8 a month from the government. (Apparently governments haven’t changed much!)  She and her children, including my great-grandmother, lived very close to the bone after my great-great grandfather’s death.

There was no money for an education; no ease about great-grandmother Lavinia’s life, but she treasured the education she had been able to have and spoke of her time at “Miss Alice’s Academy” with pride.  When she grew up she married a sweet, gentle man who developed severe heart problems early on in their marriage and wasn’t able to do much to provide for their family.  She had to find the strength to make things work, just as her mother before her.  She was a tiny little thing, under five feet tall, but with a strength of character which made her a force to be reckoned with.  She was a dynamo of energy, and had strong opinions about everything.

However, by the time I recognized her as a specific human being and not just “old Grandma” (to distinguish her from “regular Grandma”), she had a form of dementia.  She lived with my grandparents and was often to be found sitting alone in the living room, but she was not always present in mind.  The others usually congregated in the busy kitchen which was the hub of the home.  By the time I began think seriously about family, all of my grandmothers were gone, and I had moved to another country, far away from the rest of the family who could have filled in some of the blanks.

I greatly admired all of these women.

My own mother Isabelle (named after her great-grandmother) inherited various aspects of the strength of her mother and her grandmothers.  As the only girl in a family with five boys, she had learned to stand up for herself.  She and her brothers all loved to debate (think argue).  She demonstrated an intellectual appetite in that she loved to read and had a robust curiosity about new technology.  She loved politics, as did her whole family.  Every family gathering seemed to turn into a heated debate about various topics, with each person adamant that the other was just WRONG!  In spite of her interest in new things, she was not an easy person to convince about the rightness of new ideas.  She felt social lines strongly, and had nothing but contempt for anyone who tried to move outside the social levels into which they had been born.  She read any upward aspirations as disloyalty.  She was rigid and judgmental and critical of everything or anyone she didn’t understand.  As I grew up we found it hard to manage a meeting of the minds, and our relationship was strained.  She had been verbally abusive all during my childhood and I had detached emotionally from my family at an early age.

In spite of all this, I learned strength from her as I grew up, and our difficult relationship prepared me for many situations in which I found myself later.  I learned to compartmentalize; to isolate my mind from my feelings in order to be able to get through a particular moment.  I look back at these four women: my mother, my grandmother, my great-grandmother and my great-great grandmother and am so grateful for the strength of character they brought to their own lives and which, in various forms, they passed on to me.

Not all of us come from happy families, and sometimes we may feel guilt about negative feelings on such holidays as Mother’s Day.  Fortunately, if we are believers we can learn healthy family values from our heavenly Father.  He demonstrates perfect parenthood.  No matter what our human backgrounds have been; no matter how difficult or how unhappy, He offers us a place in a different kind of family: the family of God.  We can put behind all the pain of our past lives and rejoice in new, loving relationships.

God is our Father, and has brought us into His family through adoption.  Through His Son Jesus and the work of the Holy Spirit, we learn the new loving family patterns which shape us toward spiritual maturity.  He teaches us faithfulness.  He teaches us love.  Through obedience and trust we develop the fruit of the spirit : gentleness, kindness, patience, long suffering, and the rest.  By listening to His counsel as Parent, and learning by Christ’s example, we can grow into spiritually mature women worthy to bear His name.

In every circumstance we know we can depend on being surrounded by Love.  We can come to accept and forgive all the pain of our human history before we opened our hearts to Him.  I love being a part of the family of God: I am honored to carry the name Christian ~ adopted daughter of the most High God, sister to millions of others who also bear His name.

Thank You Father, for inviting me into Your family.