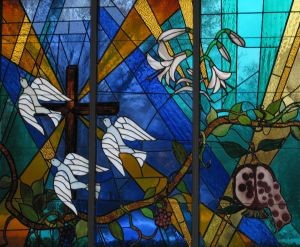 Who has believed our report?
And to whom has the arm of the Lord been revealed?
For He shall grow up before Him as a tender plant,
And as a root out of dry ground.
He has no form or comeliness;
And when we see Him,
There is no beauty that we should desire Him.
He is despised and rejected by men,
A Man of sorrows and acquainted with grief.
And we hid, as it were, our faces from Him;
He was despised, and we did not esteem Him.

Surely He has borne our griefs
And carried our sorrows;
Yet we esteemed Him stricken,
Smitten by God, and afflicted.
But He was wounded for our transgressions,
He was bruised for our iniquities;
The chastisement for our peace was upon Him,
And by His stripes we are healed.
All we like sheep have gone astray;
We have turned, every one, to his own way;
And the Lord has laid on Him the iniquity of us all.

He was oppressed and He was afflicted,
Yet He opened not His mouth;
He was led as a lamb to the slaughter,
And as a sheep before its shearers is silent,
So He opened not His mouth.
He was taken from prison and from judgment,
And who will declare His generation?
For He was cut off from the land of the living;
For the transgressions of My people He was stricken.
And they made His grave with the wicked ~
But with the rich at His death,
Because He had done no violence,
Nor was any deceit in His mouth.

Yet it pleased the Lord to bruise Him;
He has put Him to grief.
When You make His soul an offering for sin,
He shall see His seed, He shall prolong His days,
And the pleasure of the Lord shall prosper in His hand.
He shall see the labor of His soul, and be satisfied.
By His knowledge My righteous Servant shall justify many,
For He shall bear their iniquities.
Therefore I will divide Him a portion with the great,
And He shall divide the spoil with the strong,
Because He poured out His soul unto death,
And He was numbered with the transgressors,
And He bore the sin of many,
And made intercession for the transgressors.
~ Isaiah 53 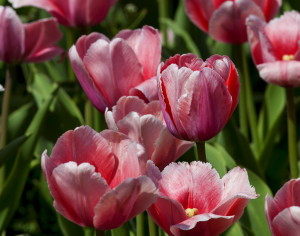 Now after the Sabbath, as the first day of the week began to dawn, Mary Magdalene and the other Mary came to see the tomb.  And behold, there was a great earthquake; for an angel of the Lord descended from heaven, and came and rolled back the stone from the door, and sat on it.  His countenance was like lightning, and his clothing as white as snow.  And the guards shook for fear of him, and became like dead men.

But the angel answered and said to the women, “Do not be afraid, for I know that you seek Jesus who was crucified.  He is not here; for He is risen, as He said.  Come, see the place where the Lord lay.  And go quickly and tell His disciples that He is risen from the dead, and indeed He is going before you into Galilee; there you will see Him.  Behold, I have told you.”

So they went out quickly from the tomb with fear and great joy, and ran to bring His disciples word.

And as they went to tell His disciples, behold, Jesus met them, saying, “Rejoice!”  So they came and held Him by the feet and worshiped Him.  Then Jesus said to them, “Do not be afraid.  Go and tell My brethren to go to Galilee, and there they will see Me.”

Now while they were going, behold, some of the guard came into the city and reported to the chief priests all the things that had happened.  When they had assembled with the elders and consulted together, they gave a large sum of money to the soldiers, saying, “Tell them, ‘His disciples came at night and stole Him away while we slept.’  And if this comes to the governor’s ears, we will appease him and make you secure.”  So they took the money and did as they were instructed; and this saying is commonly reported among the Jews until this day.

Then the eleven disciples went away into Galilee, to the mountain which Jesus had appointed for them.  When they saw Him, they worshiped Him; but some doubted.

And Jesus came and spoke to them, saying, “All authority has been given to Me in heaven and on earth. Go therefore and make disciples of all the nations, baptizing them in the name of the Father and of the Son and of the Holy Spirit, teaching them to observe all things that I have commanded you; and lo, I am with you always, even to the end of the age.” Amen. 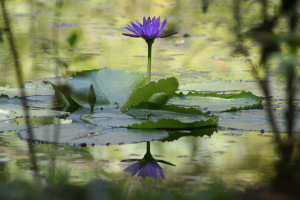 ← Love Leads Us Home ~ Our Story of Grace
Chosen in Him →

Hello!
Thank you for coming by!

He has shown you, O mortal, what is good. And what does the Lord require of you? To act justly and to love mercy and to walk humbly with your God.
Micah 6:8

Remain in Me, and I in you.
Just as the branch cannot bear
fruit of itself
but must remain in the vine,
so neither can you
unless you remain in Me.
I am the vine,
you are the branches;
the one who remains in Me,
and I in him
bears much fruit,
for apart from Me
you can do nothing.
~ John 15:4-5