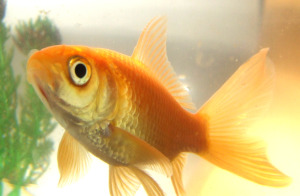 Jackson, the goldfish gift I had won 14 months earlier and entrusted to my son, had lived a good, long life in that small bowl.  I am not sure how fish years are calculated, but I figured he must have died an octogenarian.

“Honey, I think Jackson has died.”

For the next week, my son worked through his grief.  He made a small gravestone.  We buried his fish in the backyard.  Moochie delivered a eulogy at the graveside service.  He asked about Heaven and if his fish was now swimming there.  In fact, there are still days that he mentions how much he misses that goldfish.

Part of me chuckled at the seriousness of it all.  Come on, it’s just a stupid goldfish.  Instead of all this pomp and circumstance, don’t fish normally get flush funerals?

Apparently, Moochie felt responsible for his fish’s demise.  A few hours after Jackson died, Moochie came to me and confessed the great burden he had been carrying all day.  “Mom, I fed Jackson this morning.  I accidentally dumped too much food in there. I told him not to eat it, but he did.  Now he’s DEAD!”

I held him while Moochie cried some more.  He’d done what I’d told him not to do a million times.  I could have scolded him in an effort to teach him a lesson, but the lesson had already been learned.  Before I knew it, the tears slipped down my face, too.  Tears for my son’s grief.  Tears for the gaping hole death leaves in all our hearts.  Tears for the kind of comfort and grace our Heavenly Father offers to us ~ but we often feel too guilty to accept.

Maybe Moochie did give Jackson too much food. I didn’t care about any of it.  I cared about his heart.  So does God.

The Psalmist says that God carries all our tears in a bottle.  He treasures our broken hearts, our grieving souls, and our echoes of a repentant heart.  A God like this does not hold us at arm’s length and send us to the corner to think about the mess we’ve made.  Instead, He calls us to come closer, climb up in His lap, and sit a spell.

This kind of solace is found in 2 Corinthians 1:4 “[God] comforts us in all our troubles so that we can comfort others.  When they are troubled, we will be able to give them the same comfort God has given us.”

It’s this kind of comfort that is needed in large doses today.  It doesn’t take long to compile the list of hurtful comments I’ve dished out, hasty decisions that backfired, or moments I’ve lashed out in anger.  You know, the adult equivalent of feeding too much food to your goldfish even though you’ve been warned not to do it.

As John 3:17 reassures us, condemnation is not part of God’s plan.  Instead, He extends undeserved grace and mercy to us all ~ even for dead goldfish. 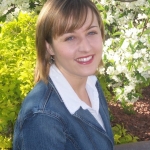 About the author:
Katie Heid believes God never wastes hurt or disappointment. She uses the hurts and disappointments from her own life to help others learn the same. She has traveled throughout the Midwest to minister to women from all walks of life and help them cultivate a deeper relationship with God and experience the hope He offers.

Katie is a graduate of Olivet Nazarene University and the Medill School of Journalism at Northwestern University.  She is a former television reporter and anchor for WLNS in Lansing, Michigan. Currently, she teaches writing and public speaking courses at Baker College and serves on the speaking team at her church. She makes her home in Michigan with her husband and two sons.

← Of Signs and Seasons
Help or Hindrance? →