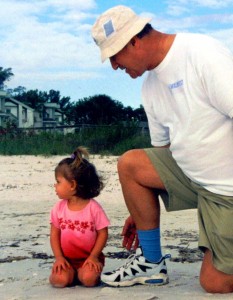 The pickup truck screeched to a grinding halt within inches of me as I sped across the street.  It all happened so fast that although I had made it safely to the other side, I had to turn back to see and try to figure out what had just happened.  The truck was still at a dead stop, and the passenger door swung open.  The father had his wife seated next to him, along with their daughter.  The father began yelling at me in a gruff voice, “Don’t you ever run out into traffic like that!  You could have been killed!” By this time, tears began to spill onto my cheeks.  Then his wife intoned, “Now look what you’re doing to her!” I thought she was talking to me. I looked over at the daughter, who looked to be about my age.  I surmised that I must have done something so terrible that it was hurtful even to her.  To my great relief, they finally left.  From my recollection, it had been the first time I had ventured to cross the street alone.  I was probably only about 6 years old at the time.  I can still see myself peeking out from around the parked cars, overwhelmed with all of the vehicles swishing by.  I imagine that I looked left, and when I didn’t see a car coming, I just darted across as fast as I could, oblivious to the traffic coming the other way.

It was a valuable lesson that I learned that day ~ a lesson learned the hard way to be sure ~ but nonetheless important.  I also learned to fear that day.  The irrational fear grew as I walked into the lunchroom at school one day, shortly after the traumatic incident. There, across the room was one of the lunch monitors.  She looked just like the wife in the truck!  Every day when I went in to eat lunch, I took note of where she was and was careful not to go near her for fear that she would see me and scold me for my horrible indiscretion. Sometime in those early years, I became aware of a problem I had in large groups of adults.  My eyes would tear up uncontrollably.  I have always read this as an innate shyness ~ a part of my character.  Little do we realize, though, how misconceptions that we carry with us through childhood can often not only change the course of our lives but our perceptions as well.

As an adult, I can see it all much more clearly.  Here was a father with a daughter close to my age, who had come within inches of running over another little girl.  I know now that I was not the only one shaken by the ordeal. The father in him came out, and he drove home his point to me with force and passion.  The mother reacted to my tears, and chastised him for being so harsh.  But in my young mind, the scenario played out much differently.  That’s often how it is with God as well.  He sees our end from our beginning.  He knows the lessons that we need to learn, and it’s hard for us to truly understand the truth of Romans 8:28, where we are told, “And we know that in all things God works for the good of those who love him, who have been called according to his purpose.”

Fear is the natural result of our misunderstanding of who God is ~ of His love and His power to bring about what is best for us in this life. In fact, fear is the natural opposite of trust.  Scripture tells us that perfect love drives out fear.  But just as I read the intentions of the man in the truck wrong, we often read the traumatic events of our lives as somehow outside of the control of God and His declared love for us.  We carry the burden of the mistakes we make and the harsh judgments that we imagine we have to bear alone.  And how often do we avoid God in those states of self-imposed shame?

I was working from a huge deficit in my young life.  I had no recollection of what it was to have a father, having been raised by my single mother since I was 1½ years old.  That void just fed into my false recollection of the incident.  I have often heard it said that we tend to see our Heavenly Father in the same manner in which we relate to our earthly fathers.  I would say this is true in my experience.  That man seemed so harsh and judgmental to me, and his perceived wrath something to avoid at all costs. Indeed, in the early years of my Christian faith, I often found myself bound up in my own self-imposed exile from God, for fear of facing His stern reproval for my ever-present shortcomings.  My prayer life would cease and my faith-walk would come to a screeching halt.  The hopelessness of depression would set in.  Eventually, God’s truth would penetrate my armor of protection, as little by little I began to grow in my understanding of who God is and how much He loves me. The truth of Christ’s sacrifice on the cross would bring me once again to my knees and I would once again see the truth of the God who loved me.  Forgiveness would flow, and fear would dissipate once again.

Friend, if you find yourself lost in the fear and self-loathing of unresolved guilt, it is very likely that you are holding on to misconceptions about who God is and His love for you.  He loves you more perfectly than even the best human Father.  He knows our weakness and tendencies toward sin and error, but He loved us enough to send His own Son to die on the cross ~ to take the penalty for all of our failures, and to give us entrance to a life of forgiveness and peace.  As believers, we need to discover who this God is who has redeemed us.  The only way to overcome our own Father-misconceptions is to fill our minds with the truth about Him.  And there is no better place to start than the Word of God:

For the word of God is living and active.  Sharper than any double-edged sword, it penetrates even to dividing soul and spirit, joints and marrow; it judges the thoughts and attitudes of the heart.  Nothing in all creation is hidden from God’s sight.  Everything is uncovered and laid bare before the eyes of him to whom we must give account.  Therefore, since we have a great high priest who has gone through the heavens, Jesus the Son of God, let us hold firmly to the faith we profess.  For we do not have a high priest who is unable to sympathize with our weaknesses, but we have one who has been tempted in every way, just as we are ~ yet was without sin.  Let us then approach the throne of grace with confidence, so that we may receive mercy and find grace to help us in our time of need. (Hebrews 4:12-16)

← Trusting the Father
Grace on Grace →