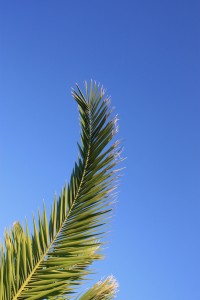 “The next day the huge crowd that had arrived for the Feast heard that Jesus was entering Jerusalem.  They broke off palm branches and went out to meet him.  And they cheered: Hosanna! Blessed is he who comes in God’s name! Yes! The King of Israel! … The crowd that had been with him when he called Lazarus from the tomb, raising him from the dead, was there giving eyewitness accounts.  It was because they had spread the word of this latest God-sign that the crowd swelled to a welcoming parade.  The Pharisees took one look and threw up their hands: “It’s out of control.  The world’s in a stampede after him.” ~ from John 12 (the MSG)

I’ve often read this portion of John 12, imagining people crowded in the city streets, relaying everything they’d heard about Jesus and eager to see Him face-to-face.  Those who had seen Lazarus emerge from his tomb were exhilarated by the sight of death defeated and proclaimed this absolute miracle to everyone  ~ what power, what authority, what divine favor rested on Jesus, son of Israel!  With this man came healing and deliverance, provision and life itself ~ was there anything He could not do?

Maybe the men and women looked sideways at the Roman soldiers, thinking that their time of ruling the streets of Jerusalem would soon be over.  Maybe they wanted to welcome in this man of divine power, believing that he would be the one to finally liberate their people.

They were looking for the fulfillment of God’ s promises and hopeful that this man called Jesus was the One… their Messiah.

Knowing that some of these same men and women were likely the ones who cried for His death only a short time later, I’ve often thought about our own slippery allegiance… how our adoration can turn to accusation just like theirs.  I’ve thought about the way I welcome Him into my own life on a day-to-day basis… do I invite Him in with praise?  Do I leave everything behind to press in to His presence, wanting to see His face?

I’ve wondered what Jesus was thinking as the cheers of ‘Hosanna’ met Him.  I wonder if He thought about how these crowds would soon betray Him.  I’ve wondered if His spirit was heavy, even as the palm branches waved, because His people could not see that the Kingdom of God would begin in their hearts and not in political power.  Maybe He looked ahead to the day when He would return and they would understand that He was King, not only of Israel, but of Heaven and Earth…

Yes, there are so many parts of that journey through Jerusalem that have intrigued me before, but something different stood out to me as I re-read the passage this morning.

They hadn’t yet witnessed the full depths of His love ~ but, still, they knew that Jesus was no ordinary man.  They knew the power that they had seen, the compassion and wisdom He’d shown.

They knew He was drawing near.

And that was enough to get them moving.  In acknowledgment of what had already come to pass and in anticipation of what was yet to come ~ they spoke of their hope to everyone who would listen.  They spread the news and so a crowd welcomed Him in jubilation and honor.

As I considered the way that those who’d followed Him ‘spread the word of the latest God-sign’ so that the crowds swelled in eagerness to see the Jesus, I felt a question stir in my heart –

Because we do have the privilege and honor of knowing the fullness of the Savior’s sacrifice.  Not only have we seen His power, but we ourselves are filled with His Spirit and grace ~ if the eye-witnesses to Lazarus’ resurrection were excited, how so much (incomparably more!) was Lazarus himself amazed at his new life?  We, who were once dead in sin, are now alive!  We are the walking/talking miracles, the signs of God’s power and mercy!

And don’t we believe that He is returning to us, just as He promised?

So are we so over-joyed, so thankful, so eager for His return that we can’t stop sharing our latest ‘God-sign’?  Do we share how He’s moved in our lives?  Is there no stopping our adoration?  Does satan try to keep our testimonies quiet to no avail?  Are we so excited to welcome Him that we seek Him and bring along the crowds, with praise ringing bold and true  ~ a ‘stampede after Him’ ~ until the enemy must throw up his hands in despair because it’s out of his control?

When He returns again, there will be no question as to Who He is.  On that day, the King of Kings will come with might and power… every knee shall bow and tongue confess that He is Lord.

And, until that day, in the here and now… it is up to us, the family of God, to lead the way to worship.  It is up to us to share the miracle of life we’ve been given.  It is up to us to declare the truth of who this Jesus is ~ although the Jewish men and women didn’t know it on that day they gathered in the streets, He is the fulfillment of God’s promises.  The true Messiah, the Lion and the Lamb, the King of our hearts.  His love is the greatest miracle and it’s for whoever will receive it.

By the power of the Holy Spirit and the word of our testimonies, will you pray with me that we will speak of His love to all of those who need Him?  Will you pray that we will see our ‘world stampede after Him’?

← I Had a Dream Today
Ugly, Beautiful Cross →

“Delight yourself also in the Lord, And He shall give you the desires of your heart.” — Psalm 37:4