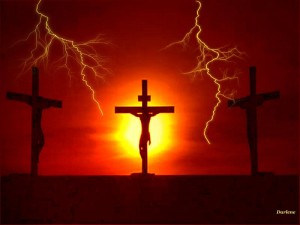 In preparation of Easter, I have been reading the passage in Luke 18:31-34 where Jesus reminds his disciples of his coming death, and I think, “can I bear to read this again; it is so hard.” I dread the guilt I feel and pain I experience when reading of the cross; it is torture, agony, and death; even so, it is the instrument that delivered my salvation.  It is horrible, but beautiful; cruel, but wonderful, and it held up grace for all who would look, and see.

I read on… Luke 23: 44-49 Around noon the sky turned dark and stayed that way until the middle of the afternoon.  The sun stopped shining, and the curtain in the temple split down the middle.  Jesus shouted, “Father, I put myself in your hands!”  Then he died.  When the Roman officer saw what had happened, he praised God and said, “Jesus must really have been a good man!” A crowd had gathered to see the terrible sight.  Then after they had seen it, they felt brokenhearted and went home.  All of Jesus’ close friends and the women who had come with him from Galilee stood at a distance and watched. (CEV)

And I, too, stand at a distance ~ not measured in yards or even miles, but reckoned in years, two thousand plus years, yet my heart is freshly wounded.  His words echo through eons to my ears and I am held by them and my soul is pierced, and I know He speaks His love to even me.

“Father, forgive them, they know not what they do.”

Recorded for all eternity is His capture in the garden, His trial, the beating, and the walk.  He carries the cross; He received the nails, and He experiences the hammer.

The day darkens, but does not hurry, and He hangs there, ignoring taunts, threats, and revelry from the solders gathered around His feet.  Once again, He was about His Father’s business; reconciling a lost and hopeless world to their Holy God.

In moments of torment He forgives a thief; He blesses a friend with the care of His Mother; He cries out to his Heavenly Father; He becomes sin, and He pays the price for me.

I stand, in the distance, through the long shadow of time, and I worship, and I glory in the cross; and I Thank Jesus.  God chose the way; Jesus bore it; I praise it, and sing of it.

This truly is “Love so amazing, so divine demands my soul, my life, my all…”

The cross still cast a shadow as one day, two days, three… Ah! Then comes the morning!

Welcome!
We’re so glad you’re here!
May the Lord refresh you
in your visit!

For the commandment is a lamp
and the teaching is light;
and correction and instruction
are the way to life…
~ Proverbs 6:23

For the moment all discipline
seems painful
rather than pleasant.
Later on, however, it produces
a harvest of righteousness
and peace for those
who have been trained by it.
Therefore strengthen the hands
which hang down,
and the feeble knees,
make level paths for your feet,
so that what is lame
may not be put out of joint
but rather be healed.
Pursue peace with all people,
and the holiness without which
no one will see the Lord.
See to it that no one falls short
of the grace of God
and that no bitter root
grows up to cause trouble
and defile many.
~ Hebrews 12:11-5