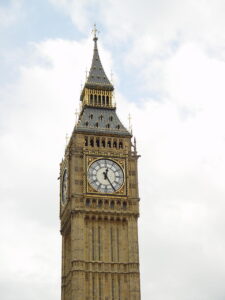 I loved Queen Elizabeth. She had been a part of my life since I was a small child. She was only a few years older than I and had been held up to me (by my Scottish aunt) as a paragon of all that a young girl should be. My cousin Jean and I played together frequently, and whenever we even looked as if we were considering mischief, my aunt would stand with her hands on her hips and say in her rich Scots brogue:  “Noo then – do ye think the wee princesses would behave in sich a way? I dinna think so!” You can believe that I took a great interest in the doings of  “wee Princess Elizabeth”.

As we all grew up I continued to have great respect for her. When her father died at such a relatively young age and she was thrust into the position of Queen at only twenty-five, my respect and sense of fond concern for her welfare solidified into a lifelong interest and affection. Although I was an American and had no possibility of ever meeting her, it made no difference. I feel as if I have lost a friend.

What could evoke such strange feelings of “kinship” with a remote figure like the Queen of the United Kingdom and the Commonwealth, whom I never met and who lived in an entirely different kind of universe than I? I knew nothing of her private life except what I could read in the papers, but it appeared that her persona in both private and public was constant.  Although she was always a woman of dignity, she was also a loving wife and mother. She was devoted in her duty to the Monarchy, and to the image of stability, virtue, and honor which that demanded. In her public life, she embodied all the virtues I wished I had. She was calm. She was gracious and kind to everyone and had a sense of humor which showed from time to time spontaneously. She was always discrete and most of all, she lived out her faith every day in humble and quiet ways.

Hers was not the kind of faith that she paraded and made into a public matter; attracting attention to herself and setting herself apart from others by an ostentatious display. She simply applied her beliefs to her choices, her attitudes, and her relationships. She was forgiving. She was patient. She displayed a large number of the fruits of the Spirit found in Galatians 5:22-23: that is, love, joy, peace, forbearance, kindness, goodness, faithfulness, gentleness, and self control.

The Archbishop of Canterbury said of her, “She was not afraid of death.” That spoke forcefully to me of the depth and strength of her faith. When a true servant of God goes to be with the Lord, it is said they are welcomed with the words, “Well done, thou good and faithful servant.” I am sure she has seen the face of her Lord, and is fully at peace, knowing she has done her duty, and is Home at last.

Well done, Ma’am, and thank you for showing all of us how it should be done.

← The Armor of God: A Mind is a Terrible Thing to Waste
Welcome Autumn! →