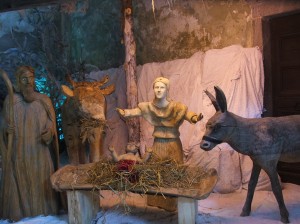 Just look at Him.  He doesn’t look very remarkable lying there in the straw.  He seems very much as any other newborn ~ red and wrinkled and making sucking motions with His tiny mouth in His sleep.  Just the same, He is special.  His mother Mary and her husband Joseph were simple faithful peasants and they had been astonished when angels had appeared to them before He was born and told them startling things about this baby.  They were troubled and puzzled, but because they were people who loved God and trusted Him, they believed and obeyed the words of the angel.

Joseph had been deeply troubled when he heard that his fiancee, who had seemed so moral and pure, was expecting a baby and he knew he could not be the father.  But the angel had explained to him that the coming child was of God, and not to be afraid to go on with his plans to marry her.  He had believed the angel and had obeyed God.

Mary, the baby’s mother, had also been visited by an angel before He was born, and in spite of the strangeness of his message, had accepted what the angel said about Him. She was a very young woman, barely more than a child, but she believed God when the angel Gabriel told her she was blessed among women and would give birth to the One Who would be called the Son of the Most High.  She affirmed to Gabriel that she was God’s servant and that she was prepared for whatever God wanted of her.  She had sung praises to God and was full of wonder that He had chosen her for such an honor, but she was still so young.  She must have been puzzled about what it all meant.

She shared her wonder with her cousin Elizabeth, who was also expecting a child.  This was an astonishing thing since Elizabeth was in her old age and had been barren, but whose child leapt joyfully in her womb when Mary came to tell her all that had happened.  Mary had kept all these things and pondered them in her heart.  As a human mother, she just wanted to have a healthy baby whom she would love and nurture and watch grow to be a man.  Now, this night, she had finally given birth to this child whose conception had been so puzzling.  What the future held, she could not know.  Right now, as she held His warm little body and nuzzled His sweet head, she was full of love for this tiny being Who needed her, and in her youth and simple heart, she looked to Joseph to protect them both.

Angels had sung and told of His birth and shepherds had seen and heard them.  They had been awestruck, and had come to worship, finding Him not in a palace, but in a stable, lying in a manger filled with straw.  He seemed so small, all wrapped up in swaddling clothes to keep Him warm in the cold night.  It seemed strange that a baby born to such ordinary folk would have His birth announced by angels, yet they believed.  They knew what they had seen and heard.

Far away in another land, there were wise men who looked to the heavens for portents and signs, and who had seen a wondrous light in the sky telling them something momentous was taking place.  They were so impressed and curious that they began a long journey to find the reason for all they read in the heavens, bringing rich gifts with them to present to this One whose birth was so important.  They believed enough to risk the long expedition in order to find HIm.

When King Herod heard through the wise men of the birth of a new King, a possible threat to his dominion, he believed enough to take defensive and terrible steps to protect his throne.  He had every male child under two years slaughtered so that he could eliminate the risk, and the mothers in the land wept for those children who were no more.  Joseph had been warned in a dream and took his family to Egypt so that Herod’s plot to kill this special baby was thwarted.  Joseph could not have known why all these things happened, but he had obeyed, recognizing the will of God.

The children of Israel had heard for many generations that He was coming, but they were looking for a political king, a powerful man who would free Israel from the power of tyrants, destroy all her enemies and make her into a great nation.  God had promised this to Abraham, and they expected someone to come in great might and glory.  It seemed unlikely to them that God would send their redemption in the form of a tiny peasant baby, in the most humble of beginnings.

Most went through the rites of worship of Yahweh, but their hearts were far from God.  They had forgotten that God had called them to be a holy people. He had called them repeatedly by various messengers to repent and be obedient to Him.  Ages before, at the first entry into Canaan, Joshua was told to make sure the people of Israel purified themselves before entering. They had begun again the rite of circumcision which they had abandoned during their forty years in the wilderness.  They were also to celebrate the Passover with unleavened bread to indicate the absence of sin before they entered into the Promised Land.  They had understood the lesson then and had purified themselves, and God had blessed them by allowing the swift conquering of Canaan.  He had shown them again and again and again that holiness and obedience on their part was a prerequisite to their success as a nation.  Across the centuries over and over they fell away from obedience into apathy or rebelliousness, only to have God call them back to repentance through prophets and other messengers.  To atone for their sin they had to offer many blood sacrifices.

Finally God, in His own time, chose to take on the form of man Himself and was here in the person of this tiny baby, prepared to become the final sacrifice.  He chose to come not so powerful and glorious that we would be frightened and overwhelmed, but came instead as a servant-God.  He would be sinless, without spot or blemish, so that He could be an acceptable sacrifice.  He would be fully God and fully man, a bridge allowing us access into the presence of the Father.  In His love and grace, God included others in this new covenant with man: those who were not of His chosen people, that whosoever will might be His child.  He would adopt all who would believe into His family.

He would send Elizabeth’s son, John the Baptizer, to be the final prophet.  He would declare to Israel one final time their need to repent and turn again to God.  John was to proclaim that the Sent One, Messiah, the perfect sacrifice and Lamb of God, was now at hand.  In the future, in another time, Christ would come again; this time as the King of power and might whom Israel had been expecting.  However, with the birth of His Son, God was asking them to choose once again to repent and be obedient and consecrate themselves by accepting His Son.  Just as before, in order to claim their inheritance, He needed them to be a holy people and this was the way He had chosen to bring that into being.  Messiah was not at all what the children of Israel had expected and so all but a very few rejected His claim.  They continued to look for their King to come in the form of a mighty warrior or a great statesman and in great glory to make Israel a great nation.  Instead, He came quietly, as a servant; not to bring political deliverance but to offer the cleansing of all their sin, to purify their souls through repentance and trust.  It was the same pattern that the Father had shown them before they entered Canaan.  Jesus would one day look out over Jerusalem in sorrow, knowing that most had not understood.

What did God the Father feel as He looked down at the scene?  God is a Spirit and not bound by the physical laws which He has imposed on the earth.  Because He is outside time He knew the end from the beginning, and as He looked down He saw the shadow of the Cross over the manger where the baby lay.  He knew the sorrow and pain ahead for this tiny, sweet child. He knew the rejection, the physical pain, the loneliness, and the sense of being apart.  He knew that through His horrifying death and the glory of His resurrection He would be giving humankind the only path to reconciliation with Himself and entry into His holy presence.  He knew that most would reject Him.  He looked at the scene through eyes of incredible love, understanding all of man’s willfulness and pride.  He had known from before the foundations of the world those who would hear and believe and trust Him, and who would accept this gift with joy.

What do we feel and believe as we look back in time to this most wondrous of nights?  Christmas is so much more than presents and trees and a holiday for the children.  On this night we remember that God so loved the world that He gave His only begotten Son; that whosoever believes in Him will have everlasting life. (John 3:16)  The life, death, and resurrection of this tiny baby have become the fulcrum on which balances the salvation of our souls.  Do we accept Him as the Savior, Son of God, Messiah, Lamb of God ~ or do we not?  Our choice will decide our eternity and much of our present lives.  Christ asked His disciples, “Who do you say that I am?”  The only right answer is: “God in the flesh, the Holy One sent to become the Savior of the world.”  On this special night, let us reaffirm our faith and trust in the mercy and grace of God, and give thanks that Jesus Christ is born.  Alleluia!  Amen.

{Editor’s note: this piece was originally posted in 2009 and is still inspiring today!}