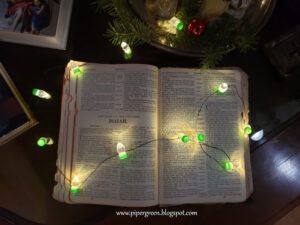 The Apostle Paul teaches us that “All Scripture is inspired by God and beneficial for teaching, for rebuke, for correction, for training in righteousness; so that the man or woman of God may be fully capable, equipped for every good work.” (2 Timomthy 3:16-17 NASB)  When Paul wrote these great words, the New Testament had not been compiled; the Scriptures were the Law and the Prophets ~ the Old Testament.  Yet he teaches the new church to use them to equip and build up the saints.

Jesus Himself tells the disciples that the Old Testament is where to find the writings concerning Him.  In Luke, we find that Jesus, after the resurrection, told the two weary disciples on the road to Emmaus, “beginning with Moses and with all the prophets, He explained to them the things concerning Himself in all the Scriptures.” (24:27 NASB)  Again in John’s Gospel, He spoke of the Old Testament that “It is they that bear witness of me.” (Jn. 5:39)

The first Messianic prophecy or the Protoevangelium is found in Genesis 3:15: “And I will put enmity between you and the woman, and between your seed and her seed; He shall bruise you on the head, and you shall bruise him on the heel.”  This prophecy is fulfilled in Matthew 1:18 and Galatians 3:16,19 refers to Jesus as being the promised seed of the woman.

The Old Testament is saturated with rich symbolism of Christ.  Jesus was from the beginning; He was with the Father before all things.  His beautiful High Priestly prayer in John 17:5, reveals His preexistence, “Father, glorify Me together with Yourself, with the glory which I had with You before the world existed.”(NASB)  He is present from the very first in Genesis and through to The Revelation of Christ.

The Incarnation was predicted in the Old Testament and is the fulfillment of prophecy. {I wrote about the fulfilled prophecies in Jesus previously.}  It was part of God’s perfect plan. The prophet Isaiah predicted that the Messiah would be both human and God: “For a child will be born to us, a son will be given to us; And the government will rest on His shoulders; And His name will be called Wonderful Counselor, Mighty God, Eternal Father, Prince of Peace.” (Is. 9:6)  These names refer simultaneously with the Father, indicating that the Father and the Son are One.

Many years ago, there was a beautiful song recorded by Aaron Jeoffery concerning who Jesus is in every book of the Bible {Find it here}.  This is an old song, but a beautiful one that speaks to the symbolism of Christ throughout the Old and New Testaments:

In Genesis, He’s the breath of life
In Exodus, the Passover Lamb
In Leviticus, He’s our High Priest
Numbers, The fire by night
Deuteronomy, He’s Moses’ voice
In Joshua, He is salvation’s choice
Judges, law-giver
In Ruth, the kinsmen-redeemer
First and Second Samuel, our trusted prophet
In Kings and Chronicles, He’s sovereign

Ezra, true and faithful scribe
Nehemiah, He’s the rebuilder of broken walls and lives
In Esther, He’s Mordecai’s courage
In Job, the timeless redeemer
In Psalms, He is our morning song

In Proverbs, wisdom’s cry
Ecclesiastes, the time and season
In the Song of Solomon, He is the lover’s dream

In Isaiah, He’s the Prince of Peace
Jeremiah, the weeping prophet
In Lamentations, the cry for Israel
Ezekiel, He’s the call from sin
In Daniel, the stranger in the fire

In Hosea, He is forever faithful
In Joel, He’s the Spirits power
In Amos, the arms that carry us
In Obadiah, He’s the Lord our Savior
In Jonah, He’s the Great Missionary

In Micah, the promise of peace
In Nahum, He is our strength and our shield
In Habakkuk and Zephaniah, He’s pleading for revival
In Haggai, He restores a lost heritage
In Zechariah, our fountain

In Malachi, He is the son of righteousness rising with healing in His wings

In Matthew, Mark, Luke, and John, He is God, Man, Messiah
In the book of Acts, He is fire from heaven
In Romans, He’s the grace of God
In Corinthians, the power of love
In Galatians, He is freedom from the curse of sin

Ephesians, our glorious treasure
Philippians, the servant’s heart
In Colossians, He’s the Godhead Trinity
Thessalonians, our coming King
In Timothy, Titus, Philemon He’s our mediator and our faithful Pastor

In Hebrews, the everlasting covenant
In James, the one who heals the sick.
In First and Second Peter, He is our Shepherd
In John and Jude, He is the lover coming for His bride
In the Revelation, He is King of Kings and Lord of Lords

He’s the Alpha and Omega
Our God and our Savior
He is Jesus Christ the Lord
And when time is no more
He is, HE IS!

← Advent ~ because You Matter
A Different Christmas… →