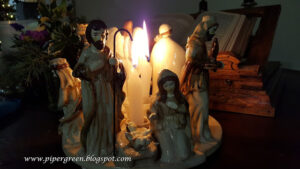 “A true Christology will bring God in at the beginning, realizing that in the life of Jesus from the start there was no independence of God.”1

“For this purpose, then, the incorporeal and incorruptible and immaterial Word of God entered our world.  In one sense, indeed, He was not far from it before, for no part of creation had ever been without Him Who, while ever abiding with the Father, yet fills all things that are.  But now He entered the world in a new way, stooping to our level in His love and Self-revealing to us.”2

The Deity And humanity, in One Glorious Person, is a concept that I cannot grasp or understand.  Though, if I could, I suppose He would not be God.  For how can one fathom God?  How can one understand Him?  The Advent season is the time we await the Christ child; the one born in a manger in the quiet of the wee hours of the night in a cave for livestock in Bethlehem many moons ago, while the world slept.  A few sleepy shepherds.  A multitude of angels.  The God of the universe left the glorious position of heaven to become a man for the world which He loved so much.  He did not appear in glorious triumph, but in the lowly human coat of flesh and bones like those He came to save.

“God is not ashamed of human lowliness.
He enters right into it. He chooses a human being to be his instrument
And works his wonders where they are least expected.
Where else are we to seek mercy
For all our betrayals, all our weak faith, all our failures,
But in the lowliness of God in the manger?”
~ Dietrich Bonhoeffer

In the beginning was the Word, and the Word was with God, and the Word was God.  He was in the beginning with God.  All things came into being through Him, and apart from Him not even one thing came into being that has come into being.  In Him was life, and the life was the Light of mankind.  And the Light shines in the darkness, and the darkness did not grasp it… And the Word [God the Son] became flesh [incarnate], and dwelt among us; and we saw His glory, glory as of the only Son from the Father, full of grace and truth. (Jn. 1:1-5, 14 NASB emphasis added)

Jesus of Nazareth was ~ and is ~ the Son of God; who, while remaining fully divine, took on human nature so that He could redeem the world.  How did this once and for all union of God and man happen?  Can the divine nature and human nature coexist within one person?  How can our glorious Lord Jesus be both God and man at once?  First, Scripture tells us that Jesus is God and that He has all the divine attributes of God:

He is the image of the invisible God, the firstborn of all creation.  For by Him all things were created, both in the heavens and on earth, visible and invisible, whether thrones or dominions or rulers or authorities ~ all things have been created through Him and for Him.  He is before all things, and in Him all things hold together.  He is also head of the body, the church; and He is the beginning, the firstborn from the dead, so that He Himself will come to have first place in everything.  For it was the Father’s good pleasure for all the fullness to dwell in Him, and through Him to reconcile all things to Himself, having made peace through the blood of His cross; through Him, I say, whether things on earth or things in heaven. (Col. 1:15-20)

This union of the divine and human natures (the hypostatic union) have the personal subsistence in the Godhead, as distinguished from their common essence or substance (ousia) as God.3 The hypostatic union is not a conflation or a mixture of two people. Jesus is not part human and part divine. The biblical teaching on the full deity
and full humanity of Christ has been believed from the earliest times in the history of the church.4

Both the Old and New Testaments present Jesus Christ as having the divine nature and human nature in a single undivided personality.5  The Apostle Paul rightly taught that “In Christ all the fullness of the Deity lives in bodily form”. (Colossians 2:9 NIV)  This means that the divine nature penetrates and perfects every aspect of the human, and the human is permeated by the divine.  In the Son, the divine participated in the human and the human in the divine without blurring or confusing either.  The idea of Jesus being both fully human and fully divine is not a concept that can be understood logically, because it is an event that can only be performed by a transcendent God who exists outside of time and space.  The Incarnation is truly a mystery that our human, finite mind cannot grasp.  This mystery of true divine nature and true human nature is the very heart of our faith.
It is definitely the heart of my faith, which without, I would be very lost.

“In Christ, something has taken place which is so new that it is related to our ordinary knowledge only at its extreme edges; if it is to be apprehended by us it must be apprehended from outside the limits of our ordinary human experience and thought.”6

“The Christian story is precisely the story of one grand miracle, the Christian assertion being that what is beyond all space and time, which is uncreated, eternal, came into Nature, into human nature, descended into His own universe, and rose again, bringing Nature up with Him.”

← A Son is Given…
Slices of Life, Slivers of Time →

1 comment for “God Was In Christ: The Doctrine Of The Incarnation, An Advent Journal”