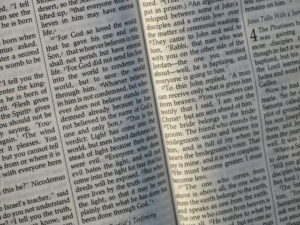 This week a Faith Wire article highlighted Christian author and speaker Beth Moore’s blasting of what she calls a “pampered gospel.”  Among other things, she addressed race relations and chalked current American church culture up to a feel-good gospel where Christians are too timid to sound the alarm on important cultural matters.  Moore made the comments while participating in a panel discussion on the 50th anniversary of the Rev. Dr. Martin Luther King Jr.’s assassination.

I agree with Moore on one point: American Christians live a comfortable life.  Few of us will know the terror of persecution simply for loving Jesus, or taste the bitterness of genocide.  We will never drink from the same dirty river where our village bathes.  We know the burden of excess and despite our penchant for busyness, we spend too much time contemplating, dissecting, or obstructing.

Sadly, this comfortable gospel Moore asks us to give up is replaced with a quasi-political social justice gospel that’s creeping into the Christian realm.  I’m not sure Moore even knows what she’s promoting, as she never articulates a specific call to action.  In contrast, Jesus sets the example with clear commands: “Go and sin no more.” “Love God and love people.” “Go and do likewise.”

I’ve participated in several Beth Moore Bible studies in the past two decades, and have followed her on Twitter for two years.  I enjoyed her studies and found one element missing from them: politics.  In fact, she remained mum about anything political during her two decades of ministry.  Her outspokenness on political matters bubbled up 18 months ago with the campaign and subsequent election of President Trump.  (I won’t address her silence during two terms of Presidents Bill Clinton, George W. Bush, and Barack Obama or why she feels the need to broach that political matters now.)  It does, however, appear she is struggling mightily with how to engage in a post-truth era, and I’m right there alongside her.  Christ followers across the country seem to be wading into the political muck and mire, hoping to bring Christ into the conversation.  Some do so brilliantly with grace, like apologist Ravi Zacharias.  Others offer up clunky solutions.

Being salt and light in a flavorless world does not only mean Christians should be engaged in tough conversations; we should elevate those conversations as well.  Christ-followers must bring more to the table than a heaping portion of worldly gospel.  We shouldn’t shout louder than the other side or rush to judgement with half-baked opinions.  If our goal is to simply win a theological or political argument, we may win the battle but lose the war.  We must love people and engage them with the ultimate goal of leading them to Jesus, since He is the only way, truth, and life that will ever matter.

It takes no courage for Christians to side with a worldly agenda because it’s one the world already embraces.  It does take courage to stand on God’s truth, avoid throwing stones, resist bearing false witness, educate oneself on the issues, and admit when we’ve got it wrong.

Something snapped on November 8, 2016, and it’s not my job to speculate on what that is.  What I can offer is a new way of doing things so we don’t add to the snark, division, confusion, and emotional ramblings that are clogging up the Christ-centered conversations we all need to participate in.

Discernment and critical thinking are a must. Just as critical thinking is necessary for combing through current events, discernment is essential when reading the Bible and listening to teachings.  If we’re not clear on God’s word, how will we identify false teachings?  The same is true with current events and the cultural barometer.  If we read the headlines rather than dig deep, we’ll sound like fools.  The same principle applies to both Bible study and news research: doing the work on our own cuts down on falling for heresy and fake news later.

Stop identifying with Identity Politics. Jesus said to love God and love people.  He did not provide a list of adjectives regarding the kinds of people to love.  Sadly, many Christian leaders today promote skin color or lifestyle choices over the people themselves.  It’s as if touching on all those bases makes some of us better than others.  Why bring race into it?  Why does gender matter?  When I approach my day, I ask God to use me in people’s lives.  I don’t specify race, gender, religion, socioeconomic status, or sexual orientation.  To do so reduces people to nothing more than a Pandora charm we seek to add to our collection. “I talked to a black person today!” “I helped that Muslim woman jump start her car!” “I loaned my lawn mower to my gay neighbor!”  People made in God’s holy image deserve more than a cheap, worldly label.

Stop using worldly terms to define your Christian walk. Trying to shoehorn our Christianity into worldly definitions only stirs up trouble.  The word “Islamophobia” didn’t exist two years ago, but now it’s used to describe anyone who questions the Muslim faith.  Confused about jihad? The Koran? The overt oppression of women and children?  Don’t bother asking those questions.  Even thinking them makes you “Islamophobic.”

Mysogyny, patriarchy, and homophobia are other buzzwords tossed around by Christian leaders.  Although there are probably some sects of the Christian church that are backward, does the church at large have trouble hearing from women teachers? Promoting their books? Pushing their Bible studies? Asking them to serve on boards and committees? No. Peddle that narrative elsewhere, please.

Stop promoting a social justice gospel. Social justice is the idea that the playing field should be leveled for everyone in terms of wealth, opportunities, or privilege.  It’s a sneaky term because it sounds like Jesus was the ultimate social justice warrior.  As stated above, we can’t use 21st century political terms and stuff our Savior into its tight box.  Jesus loved all but clearly rebuked anyone who made a mockery of His teachings.  He never loved anyone by forcefully taking something from one and giving it to another, nor did he try to shame them for their race, gender, diseases, or standing in society.  He engaged with people where He found them, then loved them enough to lead them to higher ground.

Stop hanging out with Hipster Jesus. This Jesus might as well wear a knitted scarf and lens-free glasses and sip lattes.  Rather than preaching “Go and sin no more,” Hipster Jesus promotes a gospel which teaches, “Go and do whatever you want because sin is relative and love and grace are all that matters.”  Is this the God you serve?  Does your favorite author or conference speaker preach this nonsense?  If so, you’ve created God in your own image.  Take a step back and delve into the God of the Bible.  His great love and sacrifice demands holiness from us, and that also includes dying to our humanness.  Our lusts, urges, and tendencies must be nailed to the cross as well.  We can’t conquer them on our own.  We are not enough; that’s why we need Jesus.

Be your own reporter. Jesus did not have much to say about mainstream media, but he did preach the importance of truth.  In John 8:32 he said, “If you hold to my teaching, you are really my disciples.  Then you will know the truth, and the truth will set you free.”  To represent God’s Truth in a post-truth era, we must be willing to examine our own bias and prejudices in our own hearts before moving forward.  From there, how can we gently, firmly, and rationally engage in these cultural conversations?  Part of the answer lies in refusing to let the media tell us what to think.  Instead we must become reporters in our own right.

We can do this by looking at all angles of a news story, asking questions (we call them the five W questions in journalism ~ who, what, when, where, why, and how), and developing a list of fact checking sources.  Knee-jerk emotional responses rarely serve to move the conversation forward.  Thorough research and thoughtful reflection always do.

Admit when you’re wrong or don’t have anything to add.  Working in the news business doesn’t mean I’m a know-it-all with every current event on the face of the planet.  Sometimes I don’t have an articulate solution waiting in the wings.  Even if the issue gets a rise out of me, I ask myself if it’s worth weighing in on an issue.  Does my voice need to be part of this conversation?  If so, have I done enough research to be knowledgeable?  Am I presenting the facts while still respecting the person whom I’m addressing?  When I get the facts wrong, I take necessary steps to contact that person and admit I was wrong.

God never promised our faith would be comfortable or popular or pampered.  The good news?  The world is craving the love and justice only Christ offers.  Why would Christians want to serve up marshmallow salad to a starving person, when what they really need is meat and potatoes?  Using today’s headlines are good conversation starters, but we must always be focused on eternity, and bringing as many people to Heaven with us as we can.

← God Can Change Anyone!
Nothing Can Take My Praise ~ A Song →