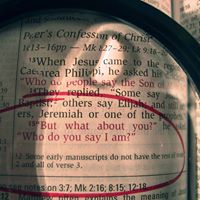 By Katie Heid
If all the world is a stage, then Christians are front and center with the spotlight shining square in their eyes.  Back in the end of October/first of November, mega-church Pastor Carl Lentz of Hillsong, New York made his way into that spotlight an interview on The View.  I had never heard of Carl Lentz before this, but when I first glanced at his picture I assumed he was U2 front man Bono.

Lentz’s guest appearance on The View is summed up in two words: squandered opportunity.  He did not seize the moment to tell of God’s righteousness which pulls us out of our sin and into restored relationship with Him.  Instead, Lentz blew it.

Joy Behar (host): “So, it’s not a sin in your church to have an abortion?”

Lentz: “That’s the kind of conversation we would have finding out your story, where you’re from, what you believe.  I mean, God’s the judge.  People have to live to their own convictions.  That’s such a broad question, to me, I’m going higher.  I want to sit with somebody and say, ‘What do you believe?’”

Behar: “So it’s not an open and shut case to you?”

Lentz: “Some people would say it is.  To me, I’m trying to teach people who Jesus is first, and find out their story.  Before I start picking and choosing what I think is sin in your life, I’d like to know your name.”

It’s no surprise that the women of The View, most of whom occupy an agnostic worldview at best, get a kick out of mocking Christians.  If the hosts can’t trap them with a loaded question, a muddled non-answer will suffice.  Behar and her ilk had no intention of having a meaningful theological conversation with Lentz, but that doesn’t let him off the hook.

The world is thirsty for Living Water (John 7:38), and we can’t continue to offer them diet soda.  Yet the empty calories of a wishy-washy Gospel are being peddled at churches and bookstores near you.

It’s in the talk of God’s grace while continuing destructive habits.  It’s in the celebration of acceptance without repentance.  It’s in the words of nationally-renowned Christian speakers and authors who write of messiness, brokenness, nuance, and a host of other synonyms.  However, we’d be hard-pressed to find a leader who calls out bad behavior by its real name.

It’s an ugly word that speaks of our impure thoughts, ugly actions, questionable lifestyle choices, pride, envy, impatience, sharp tongues, and greed.  No wonder we want to remain mum.  We sweep it under the rug.  Instead of getting to the root of the problem, we gloss over the symptoms, shrug our shoulders, and pronounce others “works in progress.”  Sin makes us uncomfortable, and since the world might be offended by it, we stay quiet.  An accepting and loving God?  He’s manageable.

He’s the same manageable God preached by Lentz and his female counterparts Jen Hatmaker and Glennon Doyle.  Their Jesus is the cool hipster who asks us to chill awhile… and do nothing else.  This Jesus never requires us to crucify our sinful selves and cleave to Him. (Galatians 2:20) “He loves us in the mess” is a popular mantra of both Hatmaker and Doyle.  However, Jesus doesn’t want us to continue rolling around in our own filth.  If Jesus is a come-as-you-are Savior who never requires us to go and sin no more (John 8:11), why would He choose crucifixion on a cross?  What is the purpose of His suffering?  How is His resurrection relevant?  If Jesus is simply some dude created to make us feel better about our lifestyle and decisions, His death on the cross makes Him nothing more than a masochistic moron.

Lentz could have stated that defining abortion as murder and a sin does not equal condemnation of those who have walked the halls of an abortion clinic.  Statistics indicate many of the women who sit in the pews next to us on Sunday have had abortions.  Committing sins does not exclude anyone from a church pew, and women who’ve had abortions always have a seat next to me.  A woman’s decision to end her pregnancy does not mean God won’t redeem it.  Jesus offers us forgiveness when we repent.  As His followers, we extend the same courtesy.  Many Christian leaders are trying to appease the world, sell more books, and gain more Twitter followers.  They accomplish this, along with ignoring the crux of the Gospel.

This begs the question: Why do those leaders view God’s sacrifice, redemption, and call to holiness as bad news for the world, instead of the Good News Jesus proclaimed?

I Peter 3:13-15 is our guide when facing the judgmental glare of the spotlight: “Who is going to harm you if you are eager to do good?  But even if you should suffer for what is right, you are blessed.  Do not fear what they fear; do not be frightened.  But in your hearts set apart Christ as Lord.  Always be prepared to give an answer to everyone who asks you to give the reason for the hope that you have.  But do this with gentleness and respect.”

Lentz supporters may use the word “courageous” to describe his television appearance and his theology.  I dub him a coward.  Courage has nothing to do with siding with the world or offering evasive answers in the face of serious questions.  True courage is looking down the barrel at scoffers and, in front of millions of viewers saying, “Yes, abortion is a sin. Killing a baby in the womb is against God’s law.  God wants better for both women and their babies, and they are welcome to worship with us.”  The fallout might be unbearable, or it could serve as a beacon for those living in hopelessness; regardless, Jesus never promised us a life free from ridicule.  He did promise unfathomable peace when the world shows up at our door with pitchforks.

As Romans 6:23 boldly states, sin by any other name would still smell like death.  That idea isn’t popular or pleasant, and it’s less appealing than a diet soda gospel.  Living water always quenches better in the long run, and it’s time to start boldly handing it out.