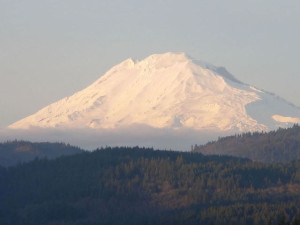 Around the year 568 BC,  Jerusalem had been destroyed and the people of God were living a life of exile in Babylon.  But God had promised restoration and He began to bring His people back to their homeland.  Under the leadership of  Zerubbabel, they returned to Jerusalem… and they set their hearts on rebuilding the temple of God.

Yet their city had been demolished ~ to rebuild meant starting over.  And the men of Judah were vulnerable, facing opposition from the people who had settled in the area during their long absence.  Their enemies did everything they could to discourage them as they worked to build the temple, even convincing King Artaxerxes to put a stop to their progress.  It was a start-and-stop process, a long and difficult journey from the days of laying a foundation to the day of completion.  At times, it must have seemed that it would never be done.  On the worst days, it must have felt impossible.

Maybe that’s why, along the way,  the Lord spoke a word for Zerubbabel to the prophet Zechariah:

“Not by might nor by power, but by My Spirit,” says the Lord Almighty. ‘What are you, mighty mountain?  Before Zerubbabel you will become level ground.  Then he will bring out the capstone to shouts of ‘God bless it! God bless it!’

Then the word of the Lord came to me: ‘The hands of Zerubbabel have laid the foundation of this temple;  his hands will also complete it.  Then you will know that the Lord Almighty has sent me to you.  Who dares despise the day of small things, since the seven eyes of the Lord that range throughout the earth will rejoice when they see the chosen capstone in the hand of Zerubbabel?‘”

Stone by stone, step by step, day by day ~ the temple would be completed.  It was a promise for Zerubbabel and the people of Judah ~ God was with them and He was still in control.  Their part was to listen and obey… He would take care of the rest.  They were not strong enough in power or resources to accomplish what God had called them to do ~ but His Spirit was greater than any obstacle they faced.

I’ve been thinking about Zerubbabel and this work given to him.  I can imagine that wondering whispers of
“Is it even possible?” and “I don’t have what it takes!” probably ran through his mind.

Sometimes those same kinds of thoughts run through mine and I am willing to guess that you’ve heard them in your own life.

Maybe Zerubbabel’s enemies told the laborers that their work was useless, unimportant, going nowhere.  Perhaps they tried to convince them that they were mistaken in believing that their city would be rebuilt.  I would guess they did everything that they could do to convince the men and women of Judah to give up and to retreat, to let that territory remain in the hands of those who had stolen it, to let the rubble of the temple remain as the testimony to destruction.

But as the temple was being built, every stone set upon another stone ~ however small it seemed in that moment ~ mattered.  Every meal cooked for the men who labored in the building mattered.  Every word of encouragement mattered.  Every person who stood firm on the promise of God mattered.

Every act done in obedience to God’s command mattered, for He empowered those acts to fulfill His purpose for His people.

And the temple, restored, stood as a testimony of God’s power and glory.

The same promise given to them is given to you and I.

In all things… it is not by our might and not by our power, but by His Spirit.

Yes, we, too, have a vision and a work to do.  Fulfilling the purpose of the Lord and building the Kingdom of God will look different for each of us ~ but you can be sure that you do have a purpose.  We are each called to share the gospel of Jesus Christ and we were each created with good works to accomplish… we are “God’s fellow workers”.
(1 Corinthians 3:9)  Jesus said that we are chosen as children of God to “go and bear fruit”… He said that we are to “go ye into all the world, and preach the gospel to every creature.” (John 15:16 and Mark 16:15)

As we set out to follow Jesus, to fulfill His command, we can expect opposition. The enemy comes to steal, kill, and destroy (John 10:10)… to discourage and undermine as we are serving the purpose of God.

He tells us that our gifts and abilities aren’t enough.  He wants us to be discouraged by waiting-days and small steps that don’t look as if they are taking us very far.  He wants us to grasp the control of “figuring out” the best ways to accomplish the work of our hands… He knows that our labor that isn’t done in obedience is in vain. (Psalm 127:1)  He wants us to believe that it’s impossible so that we will give up, retreat, and leave the dark and rubble-filled territory of this world to him.

Corrie ten Boom explains it like this: “We are Christ’s ambassadors. An ambassador is send forth in an official capacity by a nation’s government to represent that government in the territory of another nation. His authority is not measured by his own personal abilities, but is in direct proportion to the authority of the government he represents.”

Oh, how I love that truth!  We do not base our lives out of confidence in what we can do, but in the assurance of who He is… and John reminds us that we have overcome because greater is He that is in you, than he that is in the world! (1 John 4:4)

Do not retreat and do not give up because the work God has given to you matters.  We who know this grace and new life through the death and resurrection of Jesus Christ… we know that He alone restores, He alone brings light and life, He alone is the hope of the world.  This is the Gospel, this is the good news that we are called to share in whatever ways God has planned for us… and this is the truth which satan would keep from those who need it.

When the opposition comes, let us be strong in the Lord and in the power of His might (Ephesians 6:10) for our God who is greater, stronger, wiser, and true ~ He Himself will empower you to fulfill His purposes!  He has given you His own authority, His own strength, His own Spirit so that the expectation of “doing it all'” and being “good enough” in our own eyes is not a burden we must bear.  We can trust in the Lord with all our heart, leaning not unto our own understanding.  When we in all our ways acknowledge Him, He shall direct our paths. (Proverbs 3:5-6).  In every small or big moment, in every resource, in every gift, in every talent, in every relationship, in every job, in every single facet of our lives ~ when we are led by the Spirit and trust in God instead of ourselves, we bear witness to the salvation we have been given.

May our lives ~ our lives that the enemy would leave  broken in testimony to his destructive deceit ~  instead be testimonies to God’s glory and redemptive power, we ourselves God’s temple built upon the cornerstone of Jesus Christ, His Spirit dwelling in our midst. (1 Corinthians 3:16)

← Set Free to Live as His Workmanship
The Hateful Seven →