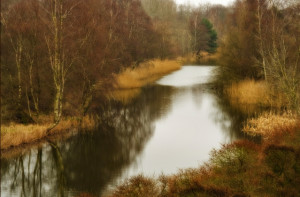 The PBS drama Wolf Hall takes place during the development of the Reformation in England.  In one episode a man stands up in church and interrupts the service.  The priest is speaking in Latin, a language which conveyed almost nothing to the majority of those in the service.  It was church ritual, but empty for anyone whose heart thirsted for real connection with God.  The man, his hands and voice shaking, begins to read aloud from the Gospel of John.  “In the beginning was the Word, and the Word was with God and the Word was God.  He was in the beginning with God and all things were made through Him and without Him nothing was made that was made.  In Him was life, and the life was the light of men…”.  In contrast to the Latin being intoned so detachedly by the priest, the English words brought life to the passage and made it relevant to those who heard.  For this challenge to the traditions of the Church of Rome, the reader was taken to the Tower of London and eventually burned at the stake as a heretic.

He was reading from a contraband copy of a new translation of scripture into English, the life’s work of William Tyndale.  Tyndale was a former Catholic cleric who had come to believe that the Gospel should be available to every man, and not only just to priests for interpretation, as was the teaching of the Church in that day.  Tyndale himself was eventually hung for his faith.

As I watched the film and heard the words in Latin, and then heard the man begin to read in my own language, I felt the tremendous impact on my heart at the power and beauty of those words: “In the beginning was the Word…”.  I put myself into the soul of the man whose desire to be faithful to the Word was so strong that he risked his life to do what he did.  I imagined his gut-wrenching fear and sweaty palms as he sat there trying to gather his courage to stand, to begin to speak.  I was stricken with guilt.  I thought how little regard I give to the miracle of having the Word so easily accessible to me in numerous translations and paraphrases.  I thought of the depth of faith of those early translators and what it cost them.  I thought of the faith of those now in the Persecuted Church who are being tortured and killed for possessing scripture ~ and I am ashamed of my own relative indifference; my taking so lightly the privilege of owning scripture and having it available to read every day.

It seemed to me in that instant that there are many things which we as believers take for granted in these relatively easy days of faith.  I compare my own attitudes to the intensity and depth of those in the past who have fought and died for the great principles of faith, and see myself as a very shallow imitation.  Faith meant something real, something vital to those believers.  It wasn’t just an easy, comfortable way of thinking which offered platitudes and comforting words in hard times.  It was the very essence of life; the source of all thought and emotion.  It was a desire for an opportunity to practice their faith without the State’s oversight which motivated the Puritans to seek the asylum of the New World, with all the dangers inherent in establishing a settlement in a wilderness.

What has brought about the contrast between the vital, driving faith of those early believers and the rather bland and cozy faith of the present-day church?  There are a number of reasons, but one is surely that the very ease of our faith has bred a kind of indifference.  We take Him for granted.  We take easy access to the Word for granted.  I am humbled and shamed before the depth of the faith of those in the past.  I want to be like that.  I want to live my life for Christ at full intensity.  If my faith isn’t worth that, then it isn’t worth anything.  Christ is either all, or He is nothing.  I refuse to be an indifferent Christian.

There is a part of me that has a deep longing.  I want to know Christ; not just to know about Him, but to understand Him.  I want to see into His mind and understand the real meaning behind the things He said.  It is difficult because the Church over the centuries has interpreted and added and subtracted from the original scripture.

In music “ornaments” or “embellishments” are musical flourishes that are not necessary to carry the overall line of the melody, but serve instead to decorate or “ornament” that line.  We seem in many cases to have ornamented the Word so lavishly that the original meaning may be obscured.  I have this urgent desire to strip away all the ornamentation and get back to the original melody line, to get back to the essence of what it means to be Christ’s person.  Sometimes I feel as if I am trapped in a jungle of traditions and rules and regulations which only complicate my faith.  I want to clear my way through this jungle and get to the real center; the heart of the Gospel found in the person of Christ.  I find I am impatient and sometimes even intolerant of the commercial and secular tone of the present Church which only confuses the purity of a straight-forward relationship with God.

This weekend I watched a film which left me feeling many conflicting emotions.  I don’t want to name it and give it legitimacy, but it was thought-provoking.  It was a cynical piece produced by unbelievers who enjoy taking pot shots at Christians, and the tone is mocking.  However, in the course of their pointing out many of the faults of the present Church, I realized that they only echoed some of my own feelings about several issues.  Among other things, they showed a huge convocation of Christian retailers, and the excess of so called “Christian” schlock being produced for merchandising: mugs, T-shirts, syrupy little booklets, pencils, jewelry and every kind of cheap product going.  It was stuff that can be found in any secular card shop, but all made “Christian” by the simple addition of a picture of Jesus’ face, or the stenciling of a scripture verse.  Most of it is such junk that you ordinarily wouldn’t want to give it house room, but because it was “Christian” it is a good seller among Christians.  They were indirectly illustrating that by the secularization and commercializing of faith, we are cheapening the Gospel.  We have put God up for sale, and faith has become big business.  If our belief has any basis in reality at all, we should all be appalled.

Our God is real.  Christ is real.  The history of the Church has been a rocky and turbulent story and there are many chapters demonstrating greed, power struggles, corruption and sin of every kind.  These things still go on in individual churches.  No church is perfect: wherever there are people there will be problems of various kinds.  Yet throughout that history are also men and women of true faith; those who endured isolation, torture, and even death for the sake of the Gospel.  In today’s world of religious upheaval, where certain forces are in a war against Christianity and Judaism, we need to be clear about not only what we believe, but why.  It isn’t enough just to go and warm ourselves in the comfortable atmosphere of seeing our friends on a Sunday morning, having our ears pleased by sweet music and gentle prayers.

I want to be God’s person with every part of me: both emotions and intellect.  I want to be a thinking Christian; not someone content just to let soothing words drift across my ears for an hour a week.  What does this Biblical passage mean?  How do I obey its principle in my life now?  What can I give back to Him in gratitude for the sacrifice He made on Calvary?  How do I live in order to reflect God’s love and grace to a world which hates Him?  Let me strip away all the man-made rules and regulations and traditions and get down to the purity and implications of the relationship between God and man; between God and me.

I have hope.  There are still believers everywhere whose faith has genuine intensity.  There are still those who forsake all creature comforts and go into jungles and dangerous places where the fact of their faith means that they are in danger for their lives.  There are still those trying to translate God’s Word into every language and dialect so that all men can read those blessed words of hope and reconciliation with God.  In every church in the land there are people conscientiously trying to serve Him.  No matter to what work He calls me, I can give my whole heart.  The world may be making huge inroads, but the Church, the Body of Christ, still survives.