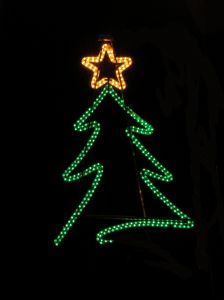 The Christmas story is a familiar one.  Mary, a pregnant virgin, gives birth to a baby boy named Jesus ~ One who will save the world from the bondage of sin and death.  The scene is comfortably nestled in our imaginations as well as on mantles, tables, and other furniture displaying the nativity.  We see shepherds, animals, Mary, and Joseph all around baby Jesus ~ worshipping the King of the Universe currently adorned in swaddling clothes.

Yet there’s a component to the story often left untold.  The setting for this part of the story is stillness.  We forget that while a small number of people surrounded baby Jesus at His birth, the rest of the world went on with their lives.  Families gathered for dinner that evening, babies slept nestled in blankets, priests continued their duties, and women busied themselves with household responsibilities.  The world didn’t stop at Jesus’ birth, but some people did, and they received the gift of a lifetime because of it.

Two people remained present with God in the stillness of their hearts despite the busy and chaotic rhythm of daily life around them.  These two were not at the manger when Christ was born.  No angel appeared to them to guide them to the baby Messiah.  But just days after His birth, they would hold the Child in their arms ~ recognizing Him and savoring the gift of their lives.

Their names were Simeon and Anna.  We don’t know Simeon’s profession, but he was evidently a normal Jew.  Nothing particularly stood out about him, at least not to the world.  Yet he did stand out in God’s eyes.  He lived a life of faith and was righteous.  His heart remained still before God even if his hands were busy in the tasks and duties of daily life.  Because of this, God told him that he wouldn’t die before laying eyes on the Messiah.

Anna was a prophetess and widow who lived and served in the temple.  Her life was consumed by serving God and carrying out the necessary tasks at the temple.  Yet she remained still in her heart and in tune with God as well.

One day they both received the gift that would confirm their dedication to God.  When at the temple to dedicate Jesus, both Simon and Anna recognized the Baby.  This would have been a little strange!  Mary and Joseph are minding their own business and suddenly a man approaches them, takes Jesus out of their arms and rejoices over Him in prayer!  They certainly weren’t expecting this kind of reaction; they’re a bit stunned at what was being said over Him.

Then an elderly woman approaches them and joins the celebration.  She gave thanks to God ~ savoring being in the presence of God Himself.

Life didn’t stop for Simeon or Anna.  They performed daily tasks and carried out their responsibilities just like any other day.  Yet even in the busyness, they remained still within their hearts toward God.  They listened to Him through the craziness and made Him their priority.  Because of this, they were able to recognize the God-child, Jesus their Messiah.

God extends opportunities for us to see Him every day.  Maybe not physically like Simeon and Anna did with Jesus, but He absolutely reveals Himself through situations, conversations, events, and His Word.  He wants to reveal Himself to us ~ to give us fresh insight into His gospel and a new~found excitement for His active work in and through our lives.

The problem is, most of us miss it.  We’re so busy going and doing and running that we miss what God wants to show us.  Jesus is right in front of us waiting for us to recognize Him, but we’re so consumed with what we’re doing, we miss Him entirely.

Still your heart this Christmas.  Even in the hectic~ness of the season, still your heart and savor a moment with the Reason behind it all.  Don’t miss out on the Gift of your life because you’re too busy doing everything else.

About the author:
Mindi Jo Furby is a fresh voice in the fight against biblical illiteracy.  Her heart pulses to the beat of hermeneutics, and she’s dedicated to drawing others into that rhythm.  Equipped with a Bachelor of Science in Biblical Studies and a Master of Arts in Religion, she’s helping people of all ages engage God and His Word in new and refreshing ways.
www.mindijofurby.com