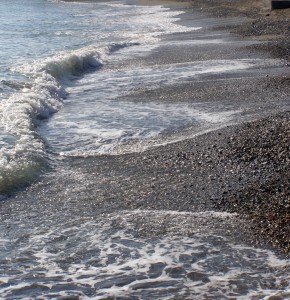 In Exodus Chapter 3, Moses was looking after his father-in-law’s flock and God appeared to him in a burning bush.  There, at the burning bush, Moses received instructions from God for his next assignment.

In verse 8, God told Moses: “I have come down to deliver my people out of the hand of the Egyptians.  I will bring them out of that land into a land flowing with milk and honey, a land of plenty.  I will bring them to the place of the Canaanites, Hittites, Amorites, Perizzites, Hivites and the Jebusites.” (These I refer to as the “ites”.)

So, God was taking His people out of the hands of the hard taskmasters of Egypt into a land that was flowing with plenty.  Great!  Except … the land wasn’t vacant, it was occupied by all the “ites!”  Yikes!  Who needs that?  Well, God (as usual) had a plan.  He is well able to handle all the “ites” in our lives.  I researched who these “ites” were, that could possibly be occupying my space, and I found out that this is what they represent:

Canaanite = the thing that comes to HUMILIATE you

Hittite = the thing that comes to make CONFUSION

Amorite = the thing that comes to SPEAK AGAINST you

Perizzite = the thing that comes to bring SEPARATION AND DIVISION

Jebusite = the thing that comes to TREAD OR TRAMPLE YOU DOWN

Hivite = the thing that tries to make you THINK SMALL

God already knew that the land He was taking His people to was occupied by the “ites.”  It didn’t matter to Him!  It’s all GOD’S PROPERTY anyway!  So every “ite” just has to leave!  (That’s one of the reasons I like dealing with real estate: it all belongs to God!  So if it’s His, then it’s mine, and I am just receiving what already belongs to me anyway!)

God placed His people there anyway, because it was HIS PLAN!  They had to overcome all of the “ites.”  So do we.  All of the people and things that try to walk all over us, cause confusion and division, try to make us think small, and humiliate us ~ they have no authority in our lives!

NO WEAPON FORMED AGAINST US SHALL PROSPER!  (Isaiah 54:17)
God didn’t say the weapon won’t be formed, He said IT WON’T PROSPER!

Walk into your next assignment in faith, KNOWING that it doesn’t matter who thinks or says what, God has sent you there, and you’re on His time clock.  He’s got this, and He’s got you!  You’re going to have what belongs to you one way or the other, God will see to it!

Sherma-Jacqueline is a Bible Teacher, Conference Speaker, Mentor, and Passionate Writer.  She has always enjoyed writing, and started off by keeping a diary in her teens.  She began prayer journaling over 18 years ago and began teaching on Prayer 11 years ago.  Her desire is to see the women of God rise up and be all that they’re called to be: Bold, Strong, Courageous and overflowing with His Word!
Visit her at: shermajacqueline.tumblr.com

← Dwell on These Things…
Dreams and Burdens →