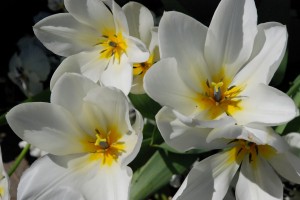 Occasionally the Lord is gracious enough to open my mind for a second to receive a new insight about truth I thought I already knew.

One of these moments occurred in church last week.  We were in the middle of the Lord’s Supper, and as I watched the bread being broken and the little cups of juice being blessed, a word came into my mind.  That word was, “Forgiven”.   All of a sudden my eyes filled with tears, and I was almost overwhelmed.

I have been a believer for a long time.  I certainly understand, both intellectually and experientially, the meaning of the word, “forgiven”.  Yet I don’t ever remember when it was such a deeply emotional thing.  It was a moment of pure worship; when I felt the presence of the Lord so strongly that He seemed to be standing right in front of me, looking at me with loving eyes and telling me personally that it was all right; that He had overcome; that I was forgiven.  The relief and gratitude that welled up made me want to fall on my face in worship right there.

I am not sure what prompted this.  I know that as I grow older, the past has begun to haunt me a little.  When I get very tired and am vulnerable, the enemy is sometimes able to get into my head and I hear the same old whispers.  There are so many things I wish I had done differently.  Although I know the past is behind me and that there is nothing I can do to change things, I am sometimes still ashamed of words I have spoken, of thoughts I have had, of bad choices I have made.  I remember certain incidents in which I behaved very badly, or said things unthinkingly ~ and I want to pull the covers up over my head and hide from the world… even though I am sure very few others remember or care about any of it.  I know intellectually that these things have all been forgiven by the Lord ~ but the memories still make me cringe.  I have had a hard time forgiving myself, even though I know the Lord has forgiven me.  In those moments I have not felt forgiven, no matter what I know by faith.

Yet in that second, a deeper understanding of “Forgiven” finally reached me as I had never understood it before, and the release was like air escaping violently from a balloon ~ a kind of grateful “whoosh”.  Then I was filled with a warmth and peace which again made my eyes fill.  I knew that if God could forgive me, I could forgive myself.  How arrogant of me to assume my standards were higher than HIS!

I am not surprised to have an incident like this in my life.  All along, the unfolding of the Gospel has been a gradual revelation.  The same lessons are taught over and over again, but at deeper and deeper levels over the years.  What you understand as grace as a young believer will be changed as the years go by; revealed as being infinitely more than we could ever imagine.  God gradually points out some of the illusions we hold about ourselves and lets us see ourselves through His eyes.  It is not always a pleasant experience.  He strips away our masks one by one, and we come face to face with all the sin hidden deep within.  It is a paradox.  The closer we get to Him, the wider we see the gap between us.  This is where we lean on our faith to give us hope that one day we will really be like Him.

I am glad it is like this.  Taking life step by step is a lot easier than having it all thrown at you at once!  When I was young, I am not sure I would have believed all that He has shown me about myself over the years.  Then I thought of sin as being primarily the sins of the flesh: like lying or stealing or sexual sin or murder.  I didn’t have much trouble with these ~ I was a pretty bland and harmless young woman.  However, after a bit, He revealed to me that I had other kinds of sins ~ sins of the spirit.  I could be judgmental; I harbored anger; I was sometimes jealous and had vindictive feelings; and sometimes I could actually hate.  I had to begin to work on these things, and as I slowly began to understand just how rebellious and full of self I was, He was back to show me that I had to be careful not to develop spiritual pride about understanding these things.  I had to learn how to put my action where my theory was; to be willing to extend myself to do the work and not just talk about it.  As time goes on, I am sure He will continue to challenge me to go even deeper to things I don’t understand yet, but which He will show me.

I have observed that you can stop the process at any time.  There have been times in my life when I lived my faith all in my head; when I didn’t want to take the next steps of submission to some challenge He has issued.  I just put everything on hold.  God has allowed me to do that, but my faith has become merely habitual and not a living thing.  He became more of an icon and less of a living, active Presence in my life.  I had a period of years in my life when it was like that.  It took a series of very hard problems to let me see how I had been trying to do everything in my own strength, and that I simply wasn’t adequate in myself to handle it.  I had to be shown again how much I needed Him.  He let me choose ~ and I chose Him.  I have never regretted it.

Trying to give Him the preeminence in all things is not an easy road.  I keep getting hit in the face with parts of my own personality that I would rather not have to acknowledge.  There are so many ambivalences. I may understand a specific issue intellectually and think I have it under control, and then He shows me a current situation in which that very concept is at issue.  I realize then that I need to go deeper and literally apply that truth to my own life.

I think many of us are blind in this same way.  We understand things intellectually, but we don’t live them.  We are basically saying to the world: “Do as I say, not as I do!”.  No wonder we are sometimes labeled, “hypocrites”.  Until we can face our own sins squarely, and recognize our inconsistencies, we will never advance spiritually.  We will stay stuck in a miasma of self-righteous complacency, and atrophy at that point for the rest of our spiritual lives.  We need to be faced with our own inconsistencies; to recognize again the depth of our rebellion and how we have been trying to hold on to control of our lives. We must see that we need to submit all things to Him, and ask for forgiveness. Only then will we understand the full magnitude of “Forgiven!”: how there is nothing too hard for the Lord; how much He loves us; what it cost Him to offer us forgiveness.  It is a miracle of grace that we can never deserve, but which we receive with humble gratitude.  I am sure that at some point I will need to understand the word, “Forgiven” at an even deeper level, but I know I can rest in His wisdom and timing!

“Out of the depths I have cried to You, O Lord; Lord, hear my voice! Let Your ears be attentive to the voice of my supplications.  If You, Lord, should mark iniquities, O Lord, who could stand?  But there is forgiveness with You, that You may be feared.” (Psalm 130: 1-4 NKJV)