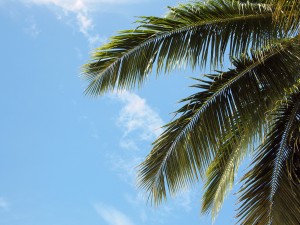 John 12:12~18
On the next day the large crowd who had come to the feast, when they heard that Jesus was coming to Jerusalem,  took the branches of the palm trees and went out to meet Him, and began to shout, “Hosanna! Blessed is He who comes in the name of the Lord, even the King of Israel.”   Jesus, finding a young donkey, sat on it; as it is written,  “Fear not, daughter of Zion; behold, your King is coming, seated on a donkey’s colt.”   These things His disciples did not understand at the first; but when Jesus was glorified, then they remembered that these things were written of Him, and that they had done these things to Him.  So the people, who were with Him when He called Lazarus out of the tomb and raised him from the dead, continued to testify about Him.  For this reason also the people went and met Him, because they heard that He had performed this sign.

Luke 19:29~44
When He approached Bethphage and Bethany, near the mount that is called Olivet, He sent two of the disciples,  saying, “Go into the village ahead of you; there, as you enter, you will find a colt tied on which no one yet has ever sat; untie it and bring it here.  If anyone asks you, ‘Why are you untying it?’ you shall say, ‘The Lord has need of it.’”   So those who were sent went away and found it just as He had told them.  As they were untying the colt, its owners said to them, “Why are you untying the colt?”  They said, “The Lord has need of it.”  They brought it to Jesus, and they threw their coats on the colt and put Jesus on it.  As He was going, they were spreading their coats on the road.  As soon as He was approaching, near the descent of the Mount of Olives, the whole crowd of the disciples began to praise God joyfully with a loud voice for all the miracles which they had seen,  shouting:

“Blessed is the King who comes in the name of the Lord;
Peace in heaven and glory in the highest!”

Some of the Pharisees in the crowd said to Him, “Teacher, rebuke Your disciples.”  But Jesus answered, “I tell you, if these become silent, the stones will cry out!”

When He approached Jerusalem, He saw the city and wept over it,  saying, “If you had known in this day, even you, the things which make for peace!  But now they have been hidden from your eyes.  For the days will come upon you when your enemies will throw up a barricade against you, and surround you and hem you in on every side, and they will level you to the ground and your children within you, and they will not leave in you one stone upon another, because you did not recognize the time of your visitation.”

Mark 11:1~11
As they approached Jerusalem, at Bethphage and Bethany, near the Mount of Olives, He sent two of His disciples, and said to them, “Go into the village opposite you, and immediately as you enter it, you will find a colt tied there, on which no one yet has ever sat; untie it and bring it here.  If anyone says to you, ‘Why are you doing this?’ you say, ‘The Lord has need of it’; and immediately he will send it back here.”  They went away and found a colt tied at the door, outside in the street; and they untied it.  Some of the bystanders were saying to them, “What are you doing, untying the colt?”  They spoke to them just as Jesus had told them, and they gave them permission.  They brought the colt to Jesus and put their coats on it; and He sat on it.   And many spread their coats in the road, and others spread leafy branches which they had cut from the fields.  Those who went in front and those who followed were shouting:

“Hosanna!
Blessed is He who comes in the name of the Lord;
Blessed is the coming kingdom of our father David;
Hosanna in the highest!”

Jesus entered Jerusalem and came into the temple; and after looking around at everything, He left for Bethany with the twelve, since it was already late.

Matthew 21:1~11
When they had approached Jerusalem and had come to Bethphage, at the Mount of Olives, then Jesus sent two disciples,  saying to them, “Go into the village opposite you, and immediately you will find a donkey tied there and a colt with her; untie them and bring them to Me.  If anyone says anything to you, you shall say, ‘The Lord has need of them,’ and immediately he will send them.”  This took place to fulfill what was spoken through the prophet:

“Say to the daughter of Zion,
‘Behold your King is coming to you,
Gentle, and mounted on a donkey,
Even on a colt, the foal of a beast of burden.’”

The disciples went and did just as Jesus had instructed them, and brought the donkey and the colt, and laid their coats on them; and He sat on the coats.  Most of the crowd spread their coats in the road, and others were cutting branches from the trees and spreading them in the road.  The crowds going ahead of Him, and those who followed, were shouting,

“Hosanna to the Son of David;
Blessed is He who comes in the name of the Lord;
Hosanna in the highest!”

When He had entered Jerusalem, all the city was stirred, saying, “Who is this?”  And the crowds were saying, “This is the prophet Jesus, from Nazareth in Galilee.”

← He Always Calls You
Behold the Lamb →