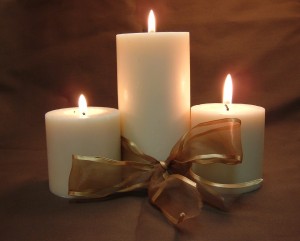 As a child, Christmas was my favorite holiday.  While there was certainly an element of innocent greed involved, there was also the magic of decorating real trees (right in the living room!), and special music, and annual visits to Santa Claus at J.L. Hudson’s department store in downtown Detroit. ( I knew he was the REAL Santa – all others were merely helpers)  There were secrets, and people went about whispering and smiling knowingly.  Christmas morning was the fantastic finale.  Underlying all the ripping of wrapping paper and the oohs and ahhs were the fragrances of the piney Christmas tree, pungent peppermint candy canes and roasting turkey all mingling ~ making my tummy growl with anticipation.  Somewhere in all of this was the pretty story of the Baby Jesus and the shepherds and the magi, but in an unbelieving home He was just a part of the whole jumbled nature of “Christmas”.

After I became a Christian, I recognized the fundamental reason for the celebrations, and tried to focus more on the astonishing implications of God in flesh: the gift of grace in the form of a Baby Who would grow up to bring salvation and reconciliation with God through His death and resurrection.

After I was married, we tried to bring our children up to understand the real meaning of Christmas, but also let them enjoy a little of the fun of Santa.  I am afraid I would get carried away with trying to make Christmas the most wonderful day of the year, and tried to institute many traditions and rituals which they would remember as adults.  However, after they were grown, Christmas became, frankly, a huge burden.  Somehow, without small children, the super-special Christmas I had tried to structure changed.  Each year as it approached, I found myself becoming depressed at the thought of how I (Santa’s REAL helper) would get through it this year.  To abandon any of those traditions seemed like a betrayal of… something?

Now I look around and listen to my friends all groaning under the burden of “keeping Christmas”, and wonder how it has all gone so wrong.  How did we, especially as Christians, take what should be a joyous remembrance of the birth of our Savior and fall under the spell of a Christmas which is simply an excess of consumerism and anxious activity?

I think of the real birth of the Christ: a cold quiet night and a very young woman giving birth unaided in a stable, surrounded by animals and a frightened husband.  There was the joyous announcement to the shepherds by the angels; and their quest to see the cause of all this heavenly exultation.  There was the internal questioning of the new mother about what all of this meant; and the oversight of the Heavenly Father as He gazed down on the fulfillment of His plans for mankind, and the realization that the shadow of a Cross fell across the manger.  It was the culmination of a plan put into motion before the foundation of the world, and it was done quietly and simply.  There was a deep dignity about it ~ a spirit of reverence and humility.  I cannot help but contrast it with the rather carnival atmosphere which now seems to surround our celebrations.  There are still some bright spots, however.

For years I sang Handel’s “Messiah” with our church choir, combined with the choir from the Methodist Church nearby.  I still hear in my head the wonderful choruses and arias which librettist Charles Jennens drew from the scripture to tell the story of the birth, life and death of the Savior, while G. F. Handel composed the glorious music.

The first sung notes: the Tenor announcing with rich clarity: “Comfort ye, comfort ye my people, saith your God.  Prepare ye the way of the Lord”… A moment later the first Chorus: “And the glory of the Lord shall be revealed, and all flesh shall see it together: for the mouth of the Lord hath spoken it.” And on it goes: “But who may abide the day of His coming? …  “And He shall purify the sons of Levi”; … “Behold, a virgin shall conceive and bear a son, and shall call His name Emmanuel, God with us” … “For unto us a child is born, unto us a son is given, and the government shall be upon His shoulder; and His Name shall be called Wonderful, Counselor, the Mighty God, the Everlasting Father, the Prince of Peace”.

For under a couple of hours we are transported to the mind of God as He works out our salvation through His Son.  The music of “Messiah” takes us step by step through to the very end, finishing with: “Worthy is the Lamb that was slain, and has redeemed us to God by His blood, to receive power, and riches, and wisdom, and strength, and honor, and glory and blessing.  Blessing and honor, glory and power be unto Him that sitteth upon the throne, and unto the Lamb, for ever and ever.  Amen.”  This is where our hearts and minds should be.

By faith we can transform and redeem Christmas for ourselves and for our children. May we make a concentrated effort to remember that Christmas isn’t about presents and food and frantic activity, but about the overwhelming love of God and His grace in sending His Son to become Emmanuel, God with us.

← My Prince Has Come
Isn’t He Beautiful? →