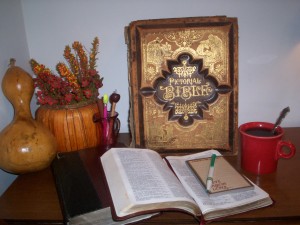 Christians know what to do when our hearts are breaking.  We tell ourselves and our loved ones to have faith.  Yet, in a practical sense, what does that mean?  What is faith?  What is it we think faith will do?

Possibly one of the best explanations of faith is in Hebrews 11:1.  It says this: “Now faith is being sure of what we hope for and certain of what we do not see.”  The chapter goes on to describe all the wonderful things that happened in the Old Testament because of the faith of those who were committed to God.  Battles were won, children were conceived past child-bearing years, the Israelites were saved out of slavery, and many other wonderful examples are given of what faith can do.  Sometimes faith does change circumstances.

However, in verse 35 of that same chapter in Hebrews, we read about “others”.   It says, “and others were tortured and refused release”, and the passage goes on to tell of many who were stoned and beaten and put to death in spite of their faith.  In the New Testament we hear of Stephen, stoned to death, and the Apostle Paul who was beaten, shipwrecked, jailed, and suffered some kind of physical problem which he had prayed fervently that God would remove.  Yet, for all Paul’s faith, God allowed the problem to continue.  Most of the apostles were killed in dreadful ways and other disciples were persecuted and killed.  God didn’t always rescue them from danger or suffering.  Sometimes faith does not change circumstances.

I have a friend who was a physician.  He tells of an incident that happened when he was still practicing medicine.  He had a patient who had just become a believer, and she was full of the joy of knowing what God had done for her through Christ.  Her husband was not a believer, and only a few months after her conversion, they found that her husband had terminal cancer.  He was highly resistant to her speaking to him about spiritual things.  She was terrified for his soul if he should die without Christ, so she would leave little tracts and other spiritual literature around the house, hoping he would read it and somehow come to know the Lord.  She prayed for him faithfully, but he laughed at her and only once did she see any evidence that he had looked at any of those papers.  Not too long after that he had to be hospitalized, and one night it was obvious that he was near death.  My friend stayed caringly with the wife as they watched the husband’s life ebb away.  The husband was in a deep coma, and she still had no idea if he had ever come to know the Lord.  She hoped so, she prayed so, but there was no way to tell, and he was obviously going to die very soon.

As they stood there watching, my friend felt helpless.  What can you say to someone who has had such faith that somehow God would answer her prayers, and now she will never know about the eternal fate of her beloved husband?  My friend finally just grabbed her hand and said, “We are going to pray!”  They bowed their heads, and prayed that somehow the husband would have read some of the literature and believed.  It was a prayer of hope.  Then, amazingly, the husband began to rally a little, came briefly out of the coma, and lived long enough to tell his wife that he had, in his last conscious hours, trusted the Savior and that he was at peace because he knew that they would someday be together again.  She saw all this as proof of God’s love for her, and that she had received this blessing because of the strength of her faith.  Perhaps she was right.

On the other hand, there are stories of missionaries in the field who have labored in trust for many years, faithfully preaching the Word of God, living lives of sacrifice and deprivation, and still never seeing one person come to know the Lord.  They pray hard, and faithfully continue to sow the Seed, but in their lifetimes they never see the fruit of their life’s work.  Sometimes God doesn’t change circumstances, and things don’t come out as we wish.  If the missionaries had understood God in the way my friend’s patient had thought of Him, they might have inferred that God didn’t love them because He didn’t answer their prayers in the way they had hoped.

In reality, we must recognize that we cannot judge God’s love on the basis of circumstances.  We are to demonstrate our faith by our trust in God’s love in spite of circumstances, whether they are good or bad.  God remains the same faithful Father throughout.  We don’t understand all the reasons why God does what He does, or why He does it in a particular way.  There are secret things that belong only to the Father.  Can we trust Him to know what is best for us in His scheme of things, and acknowledge His right to sovereignty over us?

My friend told another story about a young teen with cerebral palsy who had gone to a Christian summer camp.  She made sudden spastic movements, and awkwardly dragged one leg as she walked.  Her speech was very difficult to understand.  The other teens made an effort to include her for a day or so, but she held them back.  It was too hard to understand her, and they wanted to be on their way; not have to wait for her as she dragged her leg slowly behind her.  After a while, they just ignored her.  She spent a lonely week, but she listened in the classes, and seemed to take it all in.  On the last night of camp there was a campfire, and the director asked any who felt led to come up and drop a twig into the fire and tell what Christ had done in their lives that week.  No one stood up, until the girl with cerebral palsy stood and with great effort made her way to the campfire.  She turned slowly around in a circle and looked at each of the other campers, and in her halting, slurry speech said, “I don’t know why God made me this way.  I don’t know why I can’t speak or walk like all of you.  I don’t know why you have all treated me as you have this week.  I do know this: God loves me, and I am sure that when I get to heaven I will be able to walk and speak perfectly.  I trust Him, and I can wait.”

That is what faith does.  It gives us hope, in trust.

In Hebrews 11:39, the Jewish writer of the letter to Jewish believers says this of the Old Testament believers who were looking forward to God’s promise of a Messiah: “These were all commended for their faith, yet none of them received what had been promised.  God had planned something better for us so that only together with us would they be made perfect”.  God didn’t answer their prayer for physical relief and healing in that moment.  God had planned something better in the eventual sending of His Son for their salvation.  They looked forward to Him; we look back ~ but the assurance is the same.  We have a guaranteed promise that even in the middle of problems and heartache, God has provided something better for us.

Our proof of God’s love is not necessarily found in easy lives or lack of problems.  Our faith in God is not to be based on circumstances or experiences, but on our knowledge of His character.  We know that He is omniscient, omnipotent and omnipresent.  We know that He is holy and just and that He hates sin, but loves His own.  We have the ultimate evidence of His love in the sacrifice of His Son, and in the changed lives which we see in those who have trusted Him.  We know that in the end He will bring His perfect justice.  We have this hope through Jesus Christ, and we know that, “No eye has seen, no ear has heard, no mind has conceived what God has prepared for them who love Him”.  We can trust in the knowledge that God does see and care, and in the sure hope of the resurrection.  Our peace and joy lie not in circumstances, but in our response of trust in the eternal grace and mercy of God toward those who love Him.

If we cannot put our faith in the expectation of pleasant circumstances, we can put our faith in this:  “For I am persuaded that neither death nor life, nor angels nor principalities nor powers, nor things present nor things to come, nor height nor depth, nor any other created thing, shall be able to separate us from the love of God which is in Christ Jesus our Lord.” (Rom. 8:38,39 NKJV)

← The Beatitudes: Part 3 ~ To the Heavy-Hearted
Honoring Veterans ~ Thank you!!! →

2 comments for “Walking With God: What is Faith?”