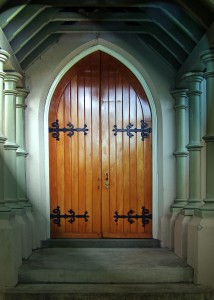 Last night the news came through our e-mail prayer chain that a dear friend had died.  She had been hit by a car two days ago and had several fractures of her legs, some head trauma and bruising.  She also had, unknown to anyone, a brain aneurysm which burst as they were preparing her for surgery.  Blood filled her brain, and she lapsed into a coma.  After consulting with the doctors, her family elected to take her home to be cared for there by her nurse/daughter until the Lord called her, which was expected to be a matter of hours.  A day later she was peacefully sleeping in her own bed, surrounded by her family, when the spark of life quietly went out and she woke to see the face of her Savior.

Her name was Betty Fowler.  She was a very special person.  She was almost 90 years old, but as sharp as any forty year old, and still moving well and still serving the Lord in various capacities.  She had seemed indestructible.  She had a stringent, dry sense of humor, and a way of saying the absolute truth without offending, but leaving everyone aware of her real views about things.  She had severe macular degeneration and was almost blind, but managed herself so well that just observing her, you would never know.  When we recently went to a cafeteria type restaurant for lunch, she had to remind me that she couldn’t read the labels to tell her which soup was which ~ and she went alone to get her coffee cup refilled.  She was fiercely independent.  One of the things we had often discussed was that one of the hardest parts of old age for independent folks is to admit, not only to yourself but to others, that you now need varying degrees of help.  One of her granddaughters brought her to church each Sunday and dropped her off, but she was dependent on someone to take her home.  Others picked her up and drove her home for the mid-week evening Bible Study and Prayer meeting.  She swallowed her pride, and did what was necessary to continue to live as normal a life as possible.

She was an incredible prayer warrior.  She was faithful to every meeting in so far as she was able.  In church she sat up near the front, a little to the left, and sang at least the first verse of all the hymns, even though she could no longer read the hymnal.  She knew the words by heart.  In her seventies she had gone to South America for a while to teach at a mission school.  She was much loved by everyone who knew her, and her sudden home-going leaves a lot of us in shock, and those of us who loved her feeling bereft and lonely for her warmth, her gentle laughter and straight-arrow way of looking at things

Many people, sometimes including believers, are afraid of death.  Her life and her call home to glory have reminded me that as believers, we have a different perspective.  While she was happy to wait until the Lord chose to take her, we had often discussed the fact that we were ready to go whenever He called.  There is no doubt in my mind that she is joyful and relieved to be in heaven; to have her sight back; to be in the presence of the Savior and hear His commendation: “Well done, Thou good and faithful servant”.  However, old folks have a slightly different view of things than young ones.  Perhaps in thinking about my friend, I can reassure some to reconsider their idea of death.

When you are young you don’t like to think about death; many have not yet learned to believe fully that heaven is an infinitely happier place than earth.  It is still so far away in their thinking that it is not quite a real place to them.  They are enjoying the vigor and strength of youth, and are so full of learning new things, and feeling their own power that they are reluctant to think even of old age.  It seems a terrible thing to contemplate.  They don’t yet realize that unless we are taken sooner, old age is inevitable, and that God has provided many blessings in old age to compensate for the loss of youth.  Many of us feel we wouldn’t be young again for anything!  So many of my friends have died that I find I no longer have any tears. Instead, it comforts me that they are happier; that their infirmities are now gone. If they have succumbed to dementia or blindness or deafness or loss of mobility, they now have all their faculties back, and can think and feel and move again. I have realized that any tears would not be for them; they would be selfish tears for me, feeling my loss and thinking only that another part of me has gone missing.  That is one of the hard parts of old age; as people die, there are fewer and fewer left who remember you in your youth or know who you really are.  Yet the Lord gives grace, as in all things, and you find that you are able to move on.  You know that what is coming is not to be despised.

The death of a believer is a bittersweet thing.  Of course we will miss our friends and family who have gone on before.  However, the most important thing to remember is that they are now finally complete; finished, completely grown up in Christ.  It is the goal I long for; to be finally done with this old nature, finally in full understanding of the nature of Christ.  The older I get, the more I realize how inadequate I am in myself to be the person I long to be, how dependent I am on Christ for everything… peace, courage, strength, and genuine understanding of spiritual things.  Younger people may find it hard to believe, but toward the end of life, death can become not a thing to fear, but recognized as merely the conduit that takes us to our real destination, the full transformation into the likeness of the Lord.  We may pray for a dignified exit, but death itself is no longer the enemy; simply the means to being, finally, made into the complete image of Christ.  It is something we have been trying to achieve all our spiritual lives; now it is within sight, and we let ourselves rest on God’s promises, and try to wait patiently until His call to us to come.

There is a story attributed to the Rev. Peter Marshall in explaining death to his young son.  He told the boy to remember what is was like when he fell asleep in the car, or in the living room, but woke the next morning in his own bed.  He would realize that Mommy or Daddy had carried him up and lovingly tucked him in, and that death was like that.  You go to sleep in one room, and wake in another.  Death is just that: a transforming move from one state of existence to another. Only believers have the assurance that death is something positive, however.  My heart trembles for those who have died without Christ and it is one of the reasons I MUST tell others about Him, and their need for Him.

I miss all my friends who have gone before me; yet I know that it is a relatively short time (in the light of eternity) until we will see each other again, only then we will all finally be as we have longed to be since we first came to know Christ.  Death has lost its sting; Christ has triumphed over the grave, and made death not a thing to be feared, but a triumphal entry into His eternal presence.  For the believer, death is the final earthly blessing of God. Christ has gone before us, to prepare a place for us which will be more than the eyes or ears or mind of man can imagine. Thank you, Lord, for loving us so much, and wanting this so much for us, that You chose to make Yourself a servant, and came to die that we might live forever in Your presence.

2 comments for “The Final Transition”

“Delight yourself also in the Lord, And He shall give you the desires of your heart.” — Psalm 37:4