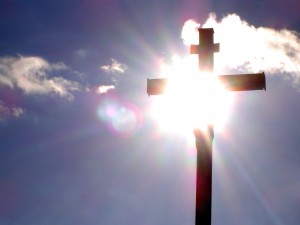 1 Now on the first day of the week Mary Magdalene came early to the tomb, while it was still dark, and saw the stone already taken away from the tomb. 2 So she ran and came to Simon Peter and to the other disciple whom Jesus loved, and said to them, “They have taken away the Lord out of the tomb, and we do not know where they have laid Him.” 3 So Peter and the other disciple went forth, and they were going to the tomb. 4 The two were running together; and the other disciple ran ahead faster than Peter and came to the tomb first; 5 and stooping and looking in, he saw the linen wrappings lying there; but he did not go in. 6 And so Simon Peter also came, following him, and entered the tomb; and he saw the linen wrappings lying there, 7 and the face-cloth which had been on His head, not lying with the linen wrappings, but rolled up in a place by itself. 8 So the other disciple who had first come to the tomb then also entered, and he saw and believed. 9 For as yet they did not understand the Scripture, that He must rise again from the dead. 10 So the disciples went away again to their own homes.

11 But Mary was standing outside the tomb weeping; and so, as she wept, she stooped and looked into the tomb; 12 and she saw two angels in white sitting, one at the head and one at the feet, where the body of Jesus had been lying. 13 And they said to her, “Woman, why are you weeping?” She said to them, “Because they have taken away my Lord, and I do not know where they have laid Him.” 14 When she had said this, she turned around and saw Jesus standing there, and did not know that it was Jesus. 15 Jesus said to her, “Woman, why are you weeping? Whom are you seeking?” Supposing Him to be the gardener, she said to Him, “Sir, if you have carried Him away, tell me where you have laid Him, and I will take Him away.” 16 Jesus said to her, “Mary!” She turned and said to Him in Hebrew, “Rabboni!” (which means, Teacher). 17 Jesus said to her, “Stop clinging to Me, for I have not yet ascended to the Father; but go to My brethren and say to them, ‘I ascend to My Father and your Father, and My God and your God.’” 18 Mary Magdalene came, announcing to the disciples, “I have seen the Lord,” and that He had said these things to her.

1 But on the first day of the week, at early dawn, they came to the tomb bringing the spices which they had prepared. 2 And they found the stone rolled away from the tomb, 3 but when they entered, they did not find the body of the Lord Jesus. 4 While they were perplexed about this, behold, two men suddenly stood near them in dazzling clothing; 5 and as the women were terrified and bowed their faces to the ground, the men said to them, “Why do you seek the living One among the dead? 6 He is not here, but He has risen. Remember how He spoke to you while He was still in Galilee, 7 saying that the Son of Man must be delivered into the hands of sinful men, and be crucified, and the third day rise again.” 8 And they remembered His words, 9 and returned from the tomb and reported all these things to the eleven and to all the rest. 10 Now they were Mary Magdalene and Joanna and Mary the mother of James; also the other women with them were telling these things to the apostles. 11 But these words appeared to them as nonsense, and they would not believe them. 12 But Peter got up and ran to the tomb; stooping and looking in, he saw the linen wrappings only; and he went away to his home, marveling at what had happened.

1 When the Sabbath was over, Mary Magdalene, and Mary the of James, and Salome, bought spices, so that they might come and anoint Him. 2 Very early on the first day of the week, they came to the tomb when the sun had risen. 3 They were saying to one another, “Who will roll away the stone for us from the entrance of the tomb?” 4 Looking up, they *saw that the stone had been rolled away, although it was extremely large. 5 Entering the tomb, they saw a young man sitting at the right, wearing a white robe; and they were amazed. 6 And he said to them, “Do not be amazed; you are looking for Jesus the Nazarene, who has been crucified. He has risen; He is not here; behold,the place where they laid Him. 7 But go, tell His disciples and Peter, ‘He is going ahead of you to Galilee; there you will see Him, just as He told you.’” 8 They went out and fled from the tomb, for trembling and astonishment had gripped them; and they said nothing to anyone, for they were afraid.

9 Now after He had risen early on the first day of the week, He first appeared to Mary Magdalene, from whom He had cast out seven demons. 10 She went and reported to those who had been with Him, while they were mourning and weeping. 11 When they heard that He was alive and had been seen by her, they refused to believe it.

12 After that, He appeared in a different form to two of them while they were walking along on their way to the country. 13 They went away and reported it to the others, but they did not believe them either.

1 Now after the Sabbath, as it began to dawn toward the first day of the week, Mary Magdalene and the other Mary came to look at the grave. 2 And behold, a severe earthquake had occurred, for an angel of the Lord descended from heaven and came and rolled away the stone and sat upon it. 3 And his appearance was like lightning, and his clothing as white as snow. 4 The guards shook for fear of him and became like dead men. 5 The angel said to the women, “Do not be afraid; for I know that you are looking for Jesus who has been crucified. 6 He is not here, for He has risen, just as He said. Come, see the place where He was lying. 7 Go quickly and tell His disciples that He has risen from the dead; and behold, He is going ahead of you into Galilee, there you will see Him; behold, I have told you.”

8 And they left the tomb quickly with fear and great joy and ran to report it to His disciples. 9 And behold, Jesus met them and greeted them. And they came up and took hold of His feet and worshiped Him. 10 Then Jesus said to them, “Do not be afraid; go and take word to My brethren to leave for Galilee, and there they will see Me.”

11 Now while they were on their way, some of the guard came into the city and reported to the chief priests all that had happened. 12 And when they had assembled with the elders and consulted together, they gave a large sum of money to the soldiers, 13 and said, “You are to say, ‘His disciples came by night and stole Him away while we were asleep.’ 14 And if this should come to the governor’s ears, we will win him over and keep you out of trouble.” 15 And they took the money and did as they had been instructed; and this story was widely spread among the Jews, and is to this day.

← Jesus, our Hope and our Joy
The Final Transition →

Welcome!
We’re glad you came by!

The thief comes only
to steal and kill and destroy;
I have come
that they may have life,
and have it to the full.
~ John 10:10

For those of you who have stayed with us after this rare gap in our posting, thank you!  Due to unusual circumstances in life, we were unable to attend to CWO as usual.  Please forgive our lapse; we appreciate your prayers and your presence!  You are loved!

Blessed is the one
who does not walk
in the counsel of the wicked,
nor stand in the way of sinners,
nor sit in the seat of scoffers!
But his delight is in
the Law of the Lord,
And on His Word
he meditates day and night.
He is like a tree
planted by streams of water,
which yields its fruit in season
and whose leaf does not wither ~
whatever he does prospers.

Not so the wicked!
They are like chaff
that the wind blows away.
Therefore the wicked will not
stand in the judgment,
nor sinners
in the assembly of the righteous.