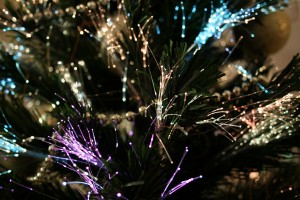 In the other corner, straight out of Christmas-planning-frenzy, a five foot four inch mother of three with a schedule to keep and a nasty, energy-sucking cold.  Weakness?  Two days without a shower and a Pebbles Flintstone hair-do (without both the bone accessory and the adorability).

Oh, yes.  I was in this arena to win the day, and victory required a perfect tree that the kids would forever and ever remember and cherish (a triumph that should be gained before 3:15 when the boys must be picked up from school).

One phone call in and I was well on my way.  After all, I didn’t have the receipt from last year’s tree purchase and the store would still allow me an exchange ~ all I had to do was bring in the old tree with its box and the new one would be waiting.

I looked at the clock.  I had an hour and a half until Baby Ballerina class.  Could I un-decorate the tree, take it apart, put it into the car, take a shower (please, oh please, manage time for the shower!), dress Kailey for ballet and get her there on time?  I checked in with the Christmas-planning-frenzy in my head and it assured me that, yes, it could be done.  And, more importantly, it MUST be done so that the rest of our well-laid plans could be executed in proper order.

So I dragged in the ladder from outside and began frantically pulling ornaments from the branches, unplugging the connecting strands of lights, and wondering if my oldest son’s suggestion of using candles like in olden days was such a far-fetched plan, after all.  Record time for baring the tree of its decorations.  Next was the easy part.  Popping off the top section, pulling off the middle, and putting it all back into the box.

The top would not budge.  Would not wiggle.  Would not move.   It REFUSED to be taken from its spot.  It was like it knew that Christmas was NOT over and it was being fired from its job well before due time.  Point one for the tree.

I considered my options.  I could wait until that night or the next for my husband to help.  I could call my father-in-law and see if he’d mind lending a hand.  Or I could pull the entire nine feet of tree over onto its side and try pulling it apart that way.

Kailey watched, baffled, from the couch as I carefully knocked the tree over onto its side, pulling the section first from one end and then from the other.  My effort was to no avail.

“What are you doing, Mommy?” Kailey kept asking. “Why are you doing that?” “Because I have to,” I kept saying.  “I’m fixing the tree.” (In retrospect, it’s understandable that this answer confused her!)

Even with the tree on its side, I could not get the top removed.  So I figured I’d just leave it.  As long as I took apart the bottom and middle sections, it would all fit into the box.  Sort of, anyway.  Enough to get it back to the store.

I proceeded through another forty-five minutes of battle with that tree sprawled out in the living room.  I had so many scratches on my arms and legs that it looked like I’d been brawling with a wild cat.  Not one piece of that tree would cooperate.  I could not get it to come apart.

This time, I considered no options.  I was not giving up.  I would carry that tree in its nine feet of bristly splendor through the back door, down the steps, out of the yard and into the car.  It’s not like it was an actual tree.  Heavy-shmeavy.

How hard could it be? (Spoiler alert, spoken in quite the whiny voice: hard. Really, really, really hard!)

Anyway, I proceeded to become that woman in the neighborhood who has clearly lost a few marbles in Christmas-prep-land.  If you happened to have been looking out your window on a Wednesday morning and saw a pajama-clad girl dragging a giant Christmas tree through her back-door, well, that was me.  Sorry for the kicking of the tree.  I am not usually violent towards (fake or real) gifts of nature.  Also, sorry for the Pebbles-hair.

Nothing stopped me.  Not the tree getting stuck in the back door.  And then again on the porch steps.  I just kept climbing over the thing to push it, leaning back to smush in the branches, and scooting over to pull again.  Repeat, repeat, repeat.

Actually, I had a brilliant idea during the stuck moments.  If I could just get gravity to help me pull the tree down the porch steps, then I could have it land on the kids’ wagon!  I could roll it to the car!

Amazingly enough, the wagon actually helped.  The bottom two-thirds of the tree may have accumulated a new layer comprised of pine needles and leaves as I puttered towards the drive-way, but what could be more natural than all of that on a tree?

It took lots more time, much rearranging, and maybe a few tears before that tree was shoved into the back of the car, but it got there.  I even got the door to close.  I was sweating and I was bleeding, but I’d done it.  And I even had three minutes to spare for a shower (you’re relieved, aren’t you?).

After waiting/collapsing through Kailey’s dance class, I headed to the store for the great exchange.  I probably should’ve felt a bit more embarrassed about the state of the tree, but I was mostly just glad it was in the car.  I did, of course, sheepishly explain to the customer service attendant about the ‘bit’ of trouble I’d had taking it all apart.  As he followed me to the car, I suggested that he might need someone else to help bring the tree in.  He shrugged and reached into the car.  With a single, slight twist and a pull that wasn’t even with effort, the top of that tree came off.  Just like it was supposed to do.

My jaw, literally, dropped in shock.  And when he oh-so-casually picked the entire thing up like he was carrying a stray log, I could only shake my head in disbelief.  After all that frustration, all that effort, all that hard work I’d done ~ how could he so easily take up where I’d left off?

I watched him carry the tree inside, looked at my scratched up arms and smoldered a little in indignation.  But what was there to say?  He was just better equipped to handle that tree.  Taller.  Stronger.  Arms longer and more muscular than mine.

Funny.  It would have been just that easy for my husband, too.  The husband that would’ve helped, had I waited.  Had I asked for help.  Had I not been so insistent upon my schedule, my time-line, my ability to take care of the problem.  It was 11:15 am and I was exhausted.  Dragging such a big burden along in the dirt, layering it in more and more clutter, will do that to a girl.

It wasn’t until earlier today that I thought of the Christmas-tree debacle again.  I laughed at the ridiculous picture I must have made, red-nosed and all scratched up, trying to handle something so much bigger than I was.

And it occurred to me that this wasn’t the first time I’d attempted such a feat.  That tree wasn’t the only burden I was carrying on that warm December day.  In fact, I’d been trying to get a handle on a few issues in my life and I was frustrated that I couldn’t pin down the answers.  Big questions towered over me and I couldn’t find satisfaction until I pulled them down, dissected them, and packaged them neatly away.

But try as I might, cry as I most certainly did, pull and tug and wrestle as hard as I could… I could not over-come those issues.  They were just too big and I am not equipped to carry them.  I am not even near strong or wise enough.  In fact, the attempts leave me exhausted and crying outside in the yard.  Stuck beneath the weight of it all.

It was the store rep that helped me with that silly tree.  But it was stopping to hear the voice of the Savior and releasing my control to Him that calmed my frantic heart.

If you’re trying to tackle a problem in your own strength and on your own time-line, will you slow down for a moment and listen to what He’s whispering to your heart? “Cast your cares upon Me,” He says, “for I care for you… come to Me, all who are weary and burdened, and I will give you rest.” (1 Peter 5:7 and Matthew 11:28)

Sometimes we just get so caught up in the moment… in the problem… that we stubbornly insist on figuring it all out.  Today.  Right now.  We wear ourselves out, making the problem even bigger in our own attempts to fix it, forgetting that the Savior is there all the while, wanting to relieve us from the strain and fear of our burden.  Loving us.  Waiting for us to trust Him, His timing and His ways.

He is Able, the One who was there when the heavens were rolled out and keeps the earth in orbit.  He is bigger than we can even imagine, able to do so much more than we could even think to ask.

We are unable to save ourselves, and so He carried the cross to Calvary, and with it our sins, our sickness, our every circumstance.  He made the way for us, willing to bear our pain.  And when we ask Him to help us, He will pick up our burden and replace it with His yoke, which is grace sufficient and strength that exceeds our deepest weakness.

May we trust Him with everything within us throughout this new year, knowing that He will be faithful.

And, friends, if you find that my tree is still up in mid-July, please don’t hold it against me.  Let’s be frank ~ this fight definitely went to the tree and I am in no way looking for a rematch… I’ll be waiting for help this go ’round, no matter how long I have to wait for it!

← Depression
My “Sole” and the New Year →