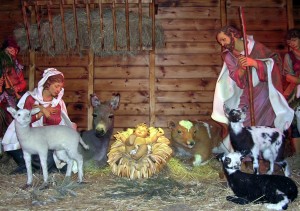 So the Lord’s promise came true, just as the prophet had said, “A virgin will have a baby boy, and He will be called Immanuel,” which means “God is with us”!
As told in…..Matthew 1:22

Begins the greatest story ever lived:

And So… I’ve been told and have read for myself that it happened somethin’ like this:

There was a young girl named Mary and she was in love with a young’n named Joseph and they were planing to be getin’ wed soon . But one day a “Blessed thing” happened to Mary, she met up with an actual angel.  Mary was full of wonderment and confusion, which was ok for she was truly blessed, and she knew it ’cause the angel told her so.  The angel said for Mary not to be ascared because God had taken mighty notice of her and He had thought she had done nice things, and that pleased Him real good.

Now along about this time things get a little excitin’ for Mary ‘cause the angel told her a “great thing” ~  “You, Mary are goin’ to be havin’ a baby, a baby boy, you are goin’ to be callin’ Him Jesus, and He is gonna to be great and God is gonna to claim Him and that will make Him “King.”

He told her many other things, causin’ her to sit down and really think about it.  A son,with a Kingdom that goes on forever?  No, not just her son but God’s son!  She must be dreamin’. “Wait a minute!”

Mary just had cause to face the reality that she wasn’t wed, and she told that strongly to the angel. “Don’t be frettin’ now!” he said “God is gonna to take care of everythin’, His spirit’s a comin’ down with His power, that means your boy child will be the holy Son of God.” Mary sat and pondered awhile and then she breathed out… long , “ I am the Lord’s servant, just let it happen!”

Now Mary is gettin’ happy and runs off to talk to her older cousin ‘Lizabeth, who has had her own miracle ’cause she having’ a baby too, even though it was way past her time for doing’ that.  So, anyway, they have a real good visit and Mary tells her the NEWS.

I’m sure she was thinkin’ that “Lizabeth would just call her a silly girl, but ‘Lizabeth said “Nooo nothing’ is impossible with God, just look at me!” At that time the baby jumped inside ‘Lizabeth’s belly and she got “the revelation”.  She told Mary how blessed she was and now she was a wonderin’ why one as important as the Lord’s Mother would come a visiting with her! “You know,” she said “God has blessed you ‘cause you do truly believe that He will keep His promise.”

Well, all these happenin’s brought songs out of Mary’s mouth and she was praisin’ the Lord with all of her heart!  She knew that He cared for her more than anythin’ and He loved her mightily and lots of other folks too.  She sung of how holy He is and how good, merciful and full of power and lovin’ He is.  She was praisin’ of how after feeding the hungry he tended to business concerning “the evil people” and righteously at that.  After all this confessin’ her secrets and heart songs to ‘Lizabeth, she rested awhile.  It took about three months to get back on her feet, then she headed on home.  Her thoughts keeping her company, “A mother of a King… a mother…!”

So, now we can‘t forget Joseph in all this, and well, that’s another story even though it‘s part of this story.  I understand that when he found out about all of this, Joseph did a lot of hard thinking and he must have been a dwelling on this mightily, even in his dreams.  He had already decided that to keep from makin’ things worse he would just break up with Mary on the qt., him being a good man and all.  While Joseph was doing all this stewin’ ’bout things, God sent an angel, just for him.  He was told that the babe Mary was gonna’ have was from the Holy Spirit, and He was gonna’ save people from their sins, now you just can’t argue with things like that.   Joseph didn’t.  The angel said, “You go on and marry her and name that baby Jesus!”  Joseph did.

Soon after they took a hard and troublesome trip to Bethlehem ’cause they had to pay some taxes.  They found a place to sleep there with some gentle animals and sweet hay.  So, deep on the very first silent, quiet night there in the little city of Bethlehem our Salvation was birthed!

All these things the angel had been telling ’bout came true, Mary as a virgin girl (I’ll tell about that later) had a baby boy, she named Him Jesus and the angel said that he would be called “ Immanuel”, and that means God came, and He is gonna be with us… always”.
Now this true
Christmas story about the birth of our Savior doesn’t have an ending ’cause it goes on forever, and if you can understand forever then you know that forever can last for an eternity, and the Merry celebratin’ will go on …
And SO… we behold the lamb!

← Advent: What Am I Waiting For?
The Gift is Love, and Life →