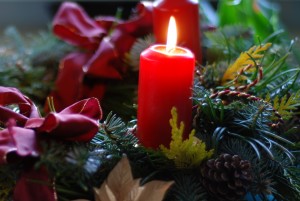 During this season of Advent, the blogosphere is full of posts concerning awaiting the Messiah, rightly so as we celebrate His arrival in Bethlehem that Holy Night.  That was truly a magical night; the stars sparkled brighter, the angels sang, the shepherds bowed in humble fear, the bleating of sheep echoed through the fields.  Creation stood still and welcomed the Redeemer-King while the rest of the world slept — unaware of the miracle that kissed the earth.

When I read this verse in Psalms 123, I began to pray and meditate and this question consumed my thoughts; what am I awaiting this Advent?  During Advent, we celebrate the arrival of the holy child, the Messiah; and I look forward to His second coming as our victorious King.  The question remains — what am I waiting for?  Is it the last window on a calendar to see the baby Jesus? Have I reduced waiting for His return to a mystical day, some future event, occupying until His magnificent return?  Am I living in survival mode until that glorious day in which I am caught up to meet Jesus in the air?  Am I so caught up in the whirlwind of the season that I miss the miracles that occur all around me?  Am I too busy waiting for His arrival, I miss His summoning hand?

Paul in the Epistles refers to himself many times as a bondservant to Christ (c.f. Romans 1:1).  As believers we too, are bondservants to the Lord, no longer a slave to sin (c.f. Romans 6:18).  Paul’s imagery carries me to the Old Testament and the illustration of a servant.

This speaks to a servant who after working for his master may go out free at the appointed time.  If however, the slave has a wife and children, which according to the Mosaic Law belong to the master, and he wishes to stay, the servant is in service to the master perpetually.  Once we become a slave to Christ, and no longer a slave to sin, we are His forever.

As servants of the Most High, as Psalm 123 suggests, we constantly should have our eyes fixed on the Master awaiting instruction.  Though many suggest this verse is spoken from the view of a slave being chastised, another idea may lie beneath the surface understanding.

Charles Spurgeon eloquently illustrates in his Treasuries of David the idea of a servant waiting for his master:

“They stand at the end of the room with their hands folded watching their lord’s movements. Orientals speak less than we do, and prefer to direct their slaves by movements of their hands: hence, the domestic must fix his eyes on his master, or he might miss a sign, and so fail to obey it: even so, the sanctified man lifts his eyes unto God, and endeavours to learn the divine will from every one of the signs which the Lord is pleased to use…‘and as the eyes of a maiden unto the hand of her mistress’ this second comparison may be used because Eastern women are even more thorough than the men in the training of their servants. “(Spurgeon, The Treasuries of David).

I love this idea; standing at the end of the room, not wishing to miss a sign, waiting for God to move His hand ready to give an assignment.  What does God need me to do in this Advent season?  As I worship God for giving the greatest gift of all time, His precious Son, I purpose to be ready for my assignment; whom can I touch for Him?  Who needs a word of encouragement?  Whose feet need washing?  Whom may I serve for the One that came to serve and not be served? (Mathew 20:28).  I pray for this to be my posture as I await the beckoning hand of the Lord, arriving with His gracious mercy poured out on me, so that I may pour it out to others.

In His grace,
Piper