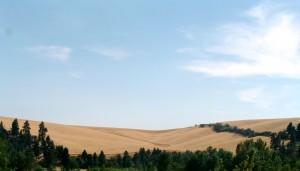 To recap Ruth’s journey to this point:  Ruth has found salvation, favor, provision, safety, and fellowship by seeking refuge in the arms of the Almighty.  Is not this a reflection of our lives?  We have favor on us because we belong to Him; God reveals Himself, provides for and protects us and gives us a new life found in the shadow of His wings.

Naomi informs Ruth that Boaz is a close relative.  As Ruth begins to enlighten Naomi to the kindness she received from Boaz,  and all that he had done for her, I believe Naomi is starting to put the pieces of the puzzle together, she is glimpsing into the future of Ruth and Boaz – a possible union.  Naomi again admonishes Ruth that if Boaz commanded her to stay with his maids until the harvest is over, she should follow his instruction.  Boaz implores Ruth to stay in his field, he wants to be her only provider.  God is our only provider, and when we leave the shelter of His wings, we put ourselves in harm’s way.

Then Naomi her mother-in-law said to her, “My daughter, shall I not seek security for you, that it may be well with you?” Ruth 3:1

In the King James it reads : “shall I not seek rest for you?” The word used for rest we see here in this verse is different than the rest we saw in Ruth 1.  The meaning of the word rest here means a settled spot or a final destination. Naomi loves Ruth and wants to see her find rest in the house of a husband, a good husband to provide for her and take care of her.  Lets look at this a little in the natural.  The harvest season lasted seven weeks.  Ruth and Boaz had seen each other and I believe an attraction had grown between them.  But why didn’t Boaz do anything to initiate a relationship with her?

I believe because he knew the law.  He knew as we will see later that he was not the next of kin – there was one closer than he so he kept his distance.  I believe Naomi felt the sadness of Ruth.  Ruth probably felt that she was an alien and stranger and that there is no way a man like Boaz would ever notice her, or that he would want to marry her.  It probably never entered her mind that it could happen.  Though I would bet she dreamt about it.  Never figuring for one moment it would really come to pass.  Ruth was young and needed to have a husband again.  So that she may live life to the full and have the abundant life Jesus came to give us.  She needed to bear fruit.  Jesus expects us to bear fruit.  Ruth longs for this and I believe, as any mother would do, Naomi tries to intervene on Ruth’s behalf.  Naomi instructs Ruth what she must do.  Again reminding her that Boaz is close relative.  Ruth and Naomi have relied on the Law the Lord gave concerning the poor and alien to glean in the field to be taken care of.  Now Naomi calls again on the name of the Lord concerning the kinsmen redeemer.  (See Deuteronomy 25: 5-10).

“Now is not Boaz our kinsman, with whose maids you were?  Behold, he winnows barley at the threshing floor tonight.  Wash yourself therefore, and anoint yourself and put on your best clothes, and go down to the threshing floor; but do not make yourself known to the man until he has finished eating and drinking.  It shall be when he lies down, that you shall notice the place where he lies, and you shall go and uncover his feet and lie down; then he will tell you what you shall do.”  She said to her, ” All that you say I will do.” Ruth 3:2-5

Now Ruth is not going to try to seduce Boaz into being her husband.  She is washing herself and putting on her best clothes and anointing herself to go to the threshing floor.  She is not using the way of the world to try to get what she wants.  She is anointing herself not painting herself as would a harlot, she is going humbly, clean, and anointed, again in obedience to her mother-in-law.  It is the attitude or the heart of how she comes to him.  There are a couple accounts in the Bible where women came like this to ask for mercy when they really needed to have intervention in a situation.

One is Abigail. (1Samuel 25) Her husband was a very bad man.  As a matter of fact the Word called him churlish and evil.  David sent his men out to him and asked him of a few sheep to feed his men and Nabal rejected the request and insulted David and his men.  So David decided he needed to kill this man and he and his army went out to do just that.  Abigail heard of what was happening and she acted fast.  Abigail prepares a feast for David and his men, they are coming to kill her husband.  She sees him and gets off her donkey and bows down to her face on the ground before David.  She takes responsibility for what her husband has done, (repentance) and asks for him not to give her husband what he deserves and brings a great feast for David and his men.  She did not go out to him empty handed and with the wrong attitude.  She did not have the same attitude as her husband.  She asked for mercy and it was given to her.  David left with his feast and his men.  The Word says Abigail was very beautiful and of good understanding.  She was wise and beautiful.  She did not go out and try to seduce David.  Though it probably would have worked!  David had quite a weakness for women.  But she went out with the right heart and a humble spirit.

The other account is Esther.  She needed mercy in a big way.  She had to go before the king.  What did she do? She fasted – (washed and anointed) herself and when it was time to go before the king she put on her royal garments (best garments) and took the chance and went before the king uninvited, which could bring death.  She did not just go strolling in there thinking, “I am the queen! The king better give me audience! Who does he think he is by not inviting me! ”.   No.  She went in humbly, knowing at anytime the king could say the word, and she would be dead.  Again, she didn’t try to seduce him or manipulate him.  She went with the right heart.

Ruth in this account does the same thing.  She could have tried to seduce him.  He was full, and had been drinking.  He had just hosted a harvesting party.  It would have been easy for all three of these women to use their beauty to try to manipulate the men into giving them what they needed.  But this is what the Word of God says:

“…beholding your chaste behavior coupled with fear.  Whose adorning let it not be the outward adorning of braiding the hair, and of wearing jewels of gold, or of putting on apparel; but let it be the hidden man of the heart, in the incorruptible apparel of a meek and quiet spirit, which is in the sight of God of great price.  For after this manner aforetime the holy women also, who hoped in God, adorned themselves, being in subjection to their own husbands: as Sarah obeyed Abraham, calling him lord: whose children ye now are, if ye do well, and are not put in fear by any terror.” 1 Peter 3:2 – 6 (ASV)

This does not mean we should not wear jewelry or make-up or nice clothing. Ladies, please wear make-up, there is nothing wrong with it.   Obviously we read the Lord wants us to put on our best clothes.  But it is to show Him honor.  These women showed the men they were going before honor by looking their best.  Really, in all three instances, the women were going before kings.  Boaz was a king in the eyes of Ruth.  She had never known a man of his stature and wealth.  And to think she may become his wife, to her that is very humbling.  She went with that attitude.  Ruth went with the right spirit, knowing she didn’t deserve in and of herself to be there.  This is what all three of these women did.   When we need to go before God, this is how we must come.  We wash ourselves in the Word of God and put on our best clothing, and we lay everything at His feet.  We need to come humbly with a quiet spirit, but at the same time we need to come with boldness to ask for what we need.

Piper is a writer and earned her B.A. in Government from Regent University; she writes passionately on politics and religion.  Piper has two blogs, Piper’s Pen which earned a peer award-The Sunshine Award, where she expounds on Biblical topics and The Christian Observer where she examines the importance of the influence of faith in politics.  Piper is a wife and mother, raising three children in Centennial, CO.

← Walking With God: One Step At A Time
Heaven for the introvert →

2 comments for “Ruth: From Beggar to Princess Part Five”