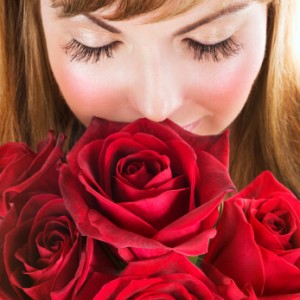 You know how your heart sort of aches whenever you watch one of those amazing romantic movie scenes, where the hero is willing to do anything to prove his love to the woman of his dreams? When it gets to that part where he bares his soul, confessing how much he feels and vowing to cherish her forever, I almost always cry. It brings out this feeling of longing—of a quiet need. I get the same feeling when I take the time to notice an amazing night sky, when a soft rain lulls me to sleep, when nature in all its beauty stops me in my tracks.

I think I feel this way because we have this built-in desire to be loved with a perfect, enduring, all-consuming love; we want to be pursued and cherished. We want to feel lovely and safe. We try to satisfy that desire, most often, with the love of a man. And being in love is wonderful. I’m not discounting love and marriage and any of the feelings that come along with that, but it’s not enough for us. We were created to accept and grow in the love of our Creator…God. The love of any man—however great he is—is never going to be enough to fill that void in your soul. I’ve been with my husband for almost ten years now, married for almost eight; and we’re still pretty crazy about each other. But (and this is an understatement), it hasn’t been easy. Any relationship will have ups and downs, and since no man is perfect, there will be times when he can’t quite understand where you’re coming from. He may not know the best way to comfort you. He may have to struggle to balance his own needs with yours, and all of that is completely natural. When we expect other people—be it a man or a best friend or whoever, to give us that perfect love, we will be disappointed.

You know that feeling I talked about; the one that brings tears to your eyes at a declaration of faithfulness or a majestic sunset? That’s God whispering into your heart. He is always pursuing you, always wanting you to understand the depths of His love for you. He gave up everything to rescue you.

It started way back when the earth was brand new. Adam and Eve, the first couple created by God, were living the good life in the Garden of Eden. I’m talking total innocence and joy in a paradise that would leave our vacation destinations looking like the Wal-Mart parking lot. God would come down to this garden and walk around with Adam and Eve, just loving the company. Adam and Eve had it all—but, like any one of us would probably do—they fell for a trick. Lucifer (you may also know him as satan, the devil, or that evil guy) actually began as one of the important angels in heaven. But his pride and envy of God took over and he ended up starting a war against the God who had created him; and when he lost, he decided that if he couldn’t take God’s throne in heaven, he would take the power and allegiance of the earth. He would try to rule over the humans that God loved so much.

And then Lucifer convinced Eve to disobey God, and with Eve and Adam’s disobedience, that purity they were living in was destroyed. Sin was brought into the garden. They knew it, too. As soon as they disobeyed, they got that sinking ‘what have we done?’ feeling and they made a run for it, hiding from God when He came for that daily visit. He knew exactly what was going on and His heart was broken. That sin changed everything—it put a wall of sorts between God and us.

But that didn’t stop His love or His desire that we one day walk with Him again, in the wonder of a paradise. From that day on, He kept making a way for us to reach Him. And when He sent His own son, Jesus, to earth—that, you guys, was the day that changed everything for the better. Jesus was, literally, God in a human body. So He was here; He could feel all of our crazy emotions; He felt pain and hunger and betrayal and friendship. You know that old saying about walking in someone else’s shoes to know where they’re coming from? He did that for us. And that’s not all He did. He was willing to die on a cross for us. (You think the electric chair is bad? A crucifixion was torture beyond anything we can imagine.) When He was on that cross, He was putting Himself in our place; Basically, He said—okay, every human is born into sin. They can’t get past sin to reach God on their own. They all are, at some point, unkind. They lie. They steal. They are lustful and envious and angry. But I’m going to take the consequences so that they won’t have to be separated from God forever; so that they have a chance for holiness and eternal life in Heaven—I will take their punishment.

And so He gave His life. The ultimate sacrifice, because He loves you.

But He didn’t stay in that graveyard. Three days and— remember, He was still God!—He came out of that grave and back into Heaven, where He waits with God for the moment that He’ll come again (another love mission!) to take those of us who have a relationship with Him into Heaven. Finally, we’ll have that relationship that He intended for us to have. We’ll have perfect peace, joy, and love—in a paradise He’s made for us.

And while we’re here, on Earth, He is with us. He gives us strength, purpose, hope. That longing for a perfect love is fulfilled when you have a relationship with Him. Yes, you will still have problems. Life is still hard and there are consequences to sin that is in this world and the sin that has been in your life, but you will have a constant, enduring love to help with all of that. And you can know that if you’re obeying His word, He will work things out for your good.

So how do you get this relationship? He has made it so simple for us:

First, admit that you are separated from God by sin—Romans 3:23 says that “all have sinned, and come short of the glory of God.”

Second, we are called to repent. Which is just a fancy word for saying I’m sorry and I won’t live in sin anymore. Jesus said, in Luke (chapter 13, verse 5), that we must all repent or perish. (Without repentance, we will be separated from God for eternity. Imagine a world without any goodness, without any hope, without any love. Terrifying!)

This is an important step—we must believe that Jesus came to earth, died for our sins, and busted up out of that graveyard. Summing it up? “For God so loved the world that He sent His one and only son, that whosoever believes in Him should not perish but have eternal life.” (John 3:16) (Maybe you’re thinking that you don’t completely understand how all of this works—that’s okay. When we believe, we believe in faith (the substance of things hoped for, the evidence of things not seen). If you put faith in Him, He supplies everything else you need.)

Romans 10:13 says that whoever calls upon the name of the Lord shall be saved; so if you admit you’re a sinner, ask forgiveness for those sins, and believe that Jesus died for you; you are one of His own. Confess it out loud—I am a new person. I am loved. I believe in You, Jesus.

If you’ve called on Him, you’ve entered into a relationship with your creator, and believe me, He will stick closer to you than any friend, brother, sister, boyfriend, husband—whoever. He is on your team, forever and always. His love will never fail you.

What’s next? Get to know Him better. Read the Bible. It’s His love letter to you. Pray. You don’t have to say anything in a certain way; He just wants you to share your life with Him. Tell other people about this amazing change in your world. Find other Christians. Going to church isn’t just a ritual, it’s a way to learn more about this God who made you, gave everything to reconnect with you.

Whether you have a new relationship with Jesus or you’ve known Him for a long time, the underlying foundation of it all remains….rest in the knowledge that you are so beloved.

About Christie
Christie Lambert is a small-town, southern writer who is daily amazed by the love of God. Although she loves fiction and has published a few short stories here and there, her writing is now focused on sharing the grace of Jesus that has swept her off her feet. She is usually doing laundry for her three small kids and musician-husband, drinking (too much) coffee with her sister, and reading while cooking (not recommended for those who like edible meals).   She is currently obsessed with learning how to play the guitar and finishing her degree in Religious Studies. Christie can be contacted at christiedlambert@gmail.com.

3 comments for “You Are So Beloved”