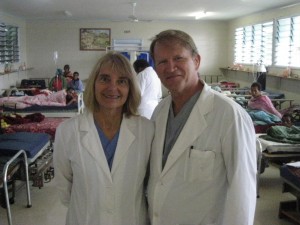 Kevin and Leslie Kerrigan are missionaries working under the auspices of World Medical Mission, the medical arm of Samaritan’s Purse.  Kevin is a general surgeon and Leslie is a registered nurse.  Following Kevin’s surgical training, they served with HCJB Global at their jungle hospital in Shell, Ecuador and then at Kijabe Medical Center in Kenya with African Inland Mission. After eight years overseas, Kevin returned to the US Navy while their five sons finished high school and graduated from University.  He retired from the Navy Medical Corps in 2007 and they have resumed their passion for missions, serving at mission hospitals around the world.  In 2010, they served for 10 weeks at Kibogora Hospital in Rwanda and 8 weeks at Kudjip Hospital in Papua New Guinea.

The Kerrigans are home-based in Spokane, WA.  Their sons all serve the Lord and are married to lovely Christian women.  All of them are busy raising Kevin and Leslie’s 10 grandchildren (each of whom are 3 years old or younger).

Kevin and Leslie met and fell in love on the mission field.  They have written an inspiring book relating their love story in Searching Heart, Testing Mind available at www.amazon.com.

If you would like to learn more about the ministry of World Medical Mission or are interested in supporting the work of the Kerrigans or any other physician, go to:  http://www.samaritanspurse.org/index.php/WMM/index/

Kevin and Leslie write from the field when they are able, and have given CWO permission to share their stories with you.   We know you will be blessed and inspired as you read about God’s work, provision and love.  Their stories are below with the most recent entry first.

We first heard about Evard from Dr Bill Rambo, a general surgeon from Medical University of South Carolina, who preceded Kevin in surgery coverage for Kibogora hospital.  Following surgery, Bill realized Evard suffered from achalsia, a rare disease that prevents food from passing from the esophagus into the stomach.  This results in malnutrition. Too weak to stand, Evard was carried to the clinic. Vomiting had followed every meal for about three weeks.  His condition had become critical. Although he was 24 years old he looked much younger.  He only weighed 60 pounds!  He was admitted to the hospital for treatment. The next day he was taken to the OR.  His limp body was easily carried from the stretcher to the operating table.  He needed a feeding tube. Unable to place a tube through the nose into the stomach, the only other option was surgery to place a tube directly into the stomach.  Surgery, and especially anesthesia, always has risks and, although this surgery was a minor one, in his weakened condition it was dangerous.  As always the OR team prayed before they began.  Twenty minutes later, with the tube in place, the patient was taken to their post-surgery ward for careful monitoring.  Once again we were thankful for the Lord’s guidance and protection over a patient’s care.

When we saw Evard the morning after his first tube feeding the nurses reported that he was now able to speak. Today he watched the Jesus film, accompanied by a variety of people who heard the movie and came to watch.  Would you pray that Evard will continue to improve? He will need to be much stronger before the surgery to correct his problem can be attempted.  It will require opening his chest – a procedure not done routinely here at Kibogora, but one now possible with the suction system we told you about last week. 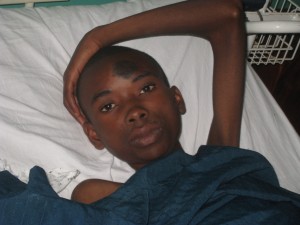 God in a Bottle

Ndazu caught me between operations.  “I have a patient I would like you to see.”

I really did not feel like being confronted with yet another problem without having adequate means of solving it.  Just two days earlier we began working at Kibogora Hospital on the Rwandan-Congolese border and already I had done half a dozen major operations, including two very sick little babies both of whom were struggling to recover from removal of major portions of their intestines.  Difficult cases such as these were made more so by rudimentary equipment and shortages of supplies.

“I have a man who was beaten up ten days ago and now is having chest pain and fever, up to 40 degrees” (104 degrees Fahrenheit).  We found the patient on the men’s ward, a cavernous austere room of concrete block packed with wall-to-wall metal frame beds.  He was lying still on the thin black rubberized mattress, sweating and taking fast, shallow breaths.  Nduhura is 27 years old and had been beaten up by unknown assailants following a night of drinking banana beer.  After examining him and looking at his chest x-ray, it appeared he had a collapsed lung and blood in his chest cavity, courtesy of the pummeling he had taken.

I suggested as politely as I could, that perhaps he should have had a tube placed in his chest cavity when he first arrived to remove the blood before it had a chance to clot and become infected as it now appeared to be.  “Do you have chest tubes and a suction machine to hook it up to here?”  Ndazu smiled and shook his head.  “This I have not seen in the two years I have been here”.

We gave the patient antibiotics but when his fever continued we took him to the operating room to place a tube in his chest in order to remove the infected blood.  The operating room staff helpfully brought an old box full of various sized chest tubes.  They then scurried off looking for a bottle system to collect the drainage from the tube.  Before long, they returned from the storage room with an antique glass bottle not dissimilar in size and shape to a Starbuck’s Frappuchino.  Such a system has not been used in the U. S. since before I became a surgeon thirty years ago.

“Boy, what I wouldn’t give for a real suction machine to hook this tube up to, rather than this sorry bottle system”, I thought.  Just then the patient moved and I heard a dreadful crash and the breaking of glass.  Now I didn’t even have the sorry bottle system.  The OR staff searched the hospital and found a bottle that would work “But”, they warned me, “it is the very last bottle we have.”

My resourceful wife, Leslie, took the stopper for the broken bottle to see if Matt, the handy man from England, might possibly have seen something in the shop that would work.  One of the nurses questioned, “Why would you ask Matt?  He doesn’t have anything like that.”  Undeterred, Leslie found Matt at home and asked him.

“Funny you should ask,” said Matt.  “I was just rummagin’ about in the shop today, lookin’ for somethin’ else and I ran across this bottle, wonderin’ what it was for.”  With that, he produced the precise bottle we needed and Leslie thought, “Wow, isn’t God amazing?  He even cares about bottles.”  She was about to leave when Matt said, “Hold on a sec.  Next to the bottle was this proper little antique machine.  I’ve no notion what it’s used for.  Does it go with the bottle?”  With that, he brought out a vintage 1940’s suction machine, covered in a thick layer of dust.  “Just let me clean it up a bit and we’ll get it runnin’ good as new.”

That very night, we hooked up the machine to Nduhura’s chest tube.  It began sucking the infected liquid out of his chest and into the bottle.  His fever disappeared and each day he gets stronger.  Now, whenever I look at the bottle, I can’t help but see God. 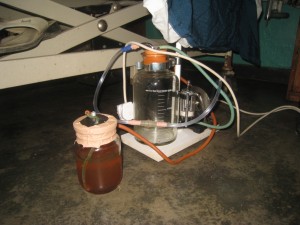 Suction machine, an answer to prayer!