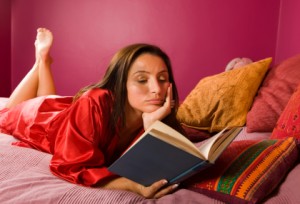 Sisters, why do we as women look down so smugly, so disgustingly, on men who struggle with the sin of pornography? Why do we have even an ounce of self-righteousness, when there is such an insidious sin that is no less damaging, invading the lives and hearts of countless women both in and out of the church? Yet this is rarely touched on. It is possible that men don’t understand the depth to which this stronghold in women’s lives is damaging their marriages, and so they leave it alone. Instead, often they are guilted into believing that they are solely responsible for the breakdown in a marriage because of their wandering eyes. But have you ever stopped to consider the damage of a wandering heart and mind?

Sure, the pornography industry is booming these days, and it is nothing less than gross. But ladies, just as popular with females has been the fantasy industry. Like porn, with its pictures, videos, websites, etc., fantasy comes in various forms too; romance novels being a huge outlet, plus movies, TV shows, talk shows, and reality shows. Oh yes, and then there are the magazines that perpetuate the more popular fictional and celebrity romances. They create buzzes about other possibilities for our love lives through their quizzes and fake sex questions. This “entertainment” is effortlessly able to drag the mind down winding roads of “what ifs,” luring women down fruitless paths by imagining ways of cornering or trapping the man of their dreams—even if she or that man are already married.

You may say, “Wait a minute! Those things are harmless; they aren’t filled with filthy pictures and lewd scenes!” Oh no? Just because there aren’t photos or videos of the actual acts, doesn’t make them any less graphic.

Think about it for a minute. The male brain is wired for visual stimulation; hence the cat calls and whistles when a lovely gal walks by a group of interested men. Or consider the tractor beam eyes that can instantly find fabulous cleavage in a sea of bystanders. The male brain is, at least initially, moved by what it SEES.

The female brain, as we know, is different. Sure we like the look of a handsome fella, but of far greater importance is how he fits into our preconceived notion of the perfect Prince Charming: his thoughts, his actions, his ability to protect and fight for his woman, his gentleness and tender heart (that only she gets to experience) his willingness to follow her and find her and to be with her at any cost. This is what gets at the heart of a woman, and that is why we don’t need a physical picture. This becomes pretty evident when one of these characters is cast in a movie. Seriously, he doesn’t have to be THAT attractive. Heck, the character doesn’t even have to be HUMAN! He will be nice looking because he is a product of Hollywood, but he doesn’t have to be a woman’s physical picture of perfect. She will still adore him because she loves the way his mind works.

The male mind is wired so that it can reach optimal excitement with just a peek at something sexual. We on the other hand are a little more complicated. More often than not, women want and even need to be wooed and romanced in order to truly let go and enjoy sexual intimacy. We often need to experience relationship, emotional intimacy and trust, to totally let our hair down.

So the story builds… It begins with a description of the heroine, and then a description of the hero. Followed by a walk down the story line, to find the details of how these two incredible people miraculously found their perfect soul mate, out of the millions of possibilities in this great big world. Now, sneak down the trail of their budding relationship, and see the odds they prevail against to make their perfect love work. Eyes breathlessly zip across line after line, as hearts pound and minds imagine and enter into another couple’s most intimate moments. This, dear Sister, is porn of the heart. Anytime we sneak into the intimacy of another relationship in our minds, whether real or imagined, we are voyeurs. Our minds are imaginative and creative; we don’t need a picture to reach the same result. We need a story, and it culminates in the same sin as the man looking at dirty magazines: Lust.

You may be thinking, “Well, this doesn’t apply to me, I just skip over the explicit parts.” Come on Sister, don’t allow your heart to be deceived! That statement is akin to that ridiculous male comeback that he only “reads Playboy for the articles.” The Bible says in Jeremiah 17:9 “The heart is deceitful above all things and beyond cure. Who can understand it?” When we allow ourselves to linger in the world of someone else’s relationship and imagine their emotional or sexual intimacy, we are lusting. Jesus says in Matthew 5:27-28, “You have heard that it was said, ‘Do not commit adultery.’ But I tell you that anyone who looks at a woman lustfully has already committed adultery with her in his heart.” This goes both ways, girls. When we think of being with someone else intimately, or even imagine ourselves in another woman’s life and love (whether emotionally or physically) we are committing adultery.

← He ♥s Me! (My forever Valentine)
Short Term Medical Missions →