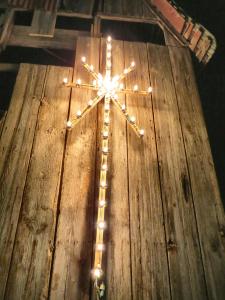 Jesus Did Not Begin To Exist

The message of Christmas is that God became flesh and came in the form of the Holy Child in a humble stable in Bethlehem.  The book of Luke describes the supernatural, prophecy-fulfilling birth of Jesus Christ; through His messengers, God sets forth the significance of this event.1

The whole of the angelic hosts proclaimed to the shepherds that the Savior had been born. (Luke 2:11-14)  This was God’s way of enacting His salvation plan.  However, though He was born in Bethlehem, He preexisted the event.  John 1:15 states, John testified about Him and cried out, saying, ‘This was He of whom I said, ‘He who comes after me has a higher rank than I, for He existed before me.” (NASB)  His birth in Bethlehem does not mark the beginning of the Son of God; rather it is when He entered the world to dwell among His creatures.  John Murray writes, “The doctrine of the incarnation is vitiated if it is conceived of as the beginning to be of the person of Christ.  The incarnation means that he who never began to be in his specific identity as the Son of God, began to be what he eternally was not.”2

Jesus is the preexistent Second Person of the Godhead.  He existed before time began, before there was any matter before anything had been made ~ before majestic mountain ranges, deep blue raging oceans ~ Jesus was. In the beginning was the Word (John 1:1), so, there at the beginning, when those things were brought into being, He was there already.

Christ was at the beginning with the Father, “And now You, Father, glorify Me together with Yourself, with the glory which I had with You before the world existed.” (Jn. 17:5 NASB)  His position was of One who transcends time and is preeminent over all creation.  Scripture speaks of the previous glory that He shared with the Father before time began.  He left the majestic, beautiful, glory when He came to tabernacle among us.

The Lord Of The Ages Is God

When the prophet speaks these words,
The time of fulfillment is still 700 years away.
But so deeply is the prophet immersed
In God’s thoughts and decisions
That he speaks of the saving hour,

As if he has already stood in worship at the manger of Jesus.
“Unto us a child is born.”

We who don’t know what will happen next year, how are we to understand
Someone looking over the centuries?
This voice of a single person,
Gently ringing down through the ages
Joined now and then by another isolated voice of prophecy,
Chimes in at last with the shepherds’ midnight adorations
And cries out in jubilation:

“For unto us a child is born, unto us a son is given.”

← Slices of Life, Slivers of Time
Advent ~ because You Matter →