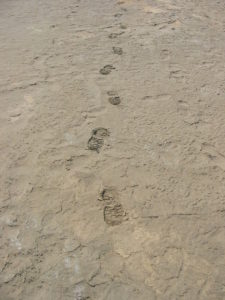 Of all the prophets in the Old Testament, Jonah had to be the worst.  The others stood firm and declared the Word of the Lord in spite of the opposition that they faced.  They sometimes expressed their fears and sorrows and doubts,
but they continued to proclaim God’s truth.  Not Jonah.  As soon as God called him, he turned
and ran away.

Of all the prophets in the Old Testament, who can I relate to the best?  No question about it: Jonah.  I don’t know much about Jonah’s background, but I have no excuse for running away from God after all that He’s done for me.

I became a Christian as a teenager about fifty years ago when I was convicted of the truth of the gospel.  As a nerd, I had to hear it many times.  Question it.  Study it.  Digest it.  In the end, it made sense to me.  A few months later, though, the doubts began to creep in.  As the days went by, they continued to multiply.  There were times when it felt like they would overwhelm my new faith ~ until the Holy Spirit led me to Psalm 22 and Isaiah 53.  No way could anyone describe Jesus’ life and death with such accuracy centuries before He was even born, unless the Lord had revealed it to them.

At that point, in all my youthful optimism, I was absolutely certain that nothing could ever shake my belief in Him again.  (Like Peter was so sure that he would follow Jesus to His death.  Instead, he denied Him three times, as recorded in Matthew 26.)

Then the suicidal depression struck during my college years.  This was the first time that I ran away from God, as Jonah did.  I’d turned away at times before that, but this was my first really running away.

On a conscious level, I didn’t see how He could love someone like me.  The irrational anxiety, the deep despair, the intense irritability, the total lack of energy, the gloomy hopelessness, the humiliating helplessness ~ these symptoms all went completely against my image of a good Christian.  I was nothing but a dismal failure.  How could He possibly love me?

On a more subconscious level (which I didn’t recognize or admit to for several months), I was fiercely angry with God.  How could He do this to me?  How could He say He loved me and yet let me suffer day after day from some unknown condition that none of my friends could understand and none of my doctors could diagnose?  Why shouldn’t I run away from Him?

But one unforgettable afternoon, God met me right where I was and brought me back to Himself.  Once more, I thought I could never turn away from Him again.

So why do I still do it?

Why did Jonah say he’d rather die than accept God’s grace for the Ninevites?  Why did he camp outside the city, eagerly hoping that God would change His mind again and destroy it?  Why did he resent ~ to the point of wishing he was dead ~ the loss of the vine that had provided shade for him in the heat of the day?  Didn’t he know better, after his incredible encounter with God in the belly of the great fish?  Like I said above, I can relate to Jonah more than to any other prophet.

But his failures are not the whole story.  Earlier, on the boat, after the sailors followed Jonah’s instructions and threw him into the sea, the most amazing thing happened.  They sacrificed and made vows to the Lord.  (Oh, yeah, and the raging storm ended immediately.  But that’s not the most amazing thing.)

What amazes me most is not that they worshiped the Lord.  Who wouldn’t, after what they’d just witnessed?  What amazes me most is that God used His prophet’s flagrant disobedience and rebellion to offer salvation for all eternity to men who might not have that opportunity otherwise.  He brought the greatest good from the darkest evil.  He brought the possibility of salvation to those who were lost, as a direct result of the sin of one of His servants.

We can’t say for certain whether any of the sailors were actually saved, or whether they simply added the Lord to the list of gods that they worshiped, but it’s very possible that we’ll see at least one of them in heaven some day.  All because Jonah ran away from God.

I’ve cherished Romans 8:28 for most of my Christian life: And we know that in all things God works for the good of those who love him, who have been called according to his purpose. (NIV)  But do I really believe that little word “all”?  If I do, then why does it surprise me that God worked for good even when Jonah blatantly defied Him?

This is such a comfort to me.  I know it’s best to follow Him, to walk with Him, to abide in Him.  That’s His will and His calling for me.  That’s how I experience the greatest love and joy and peace in this life.  But in spite of my efforts and the presence of the Holy Spirit within me, I still fail.  I still turn away from His teaching and His leading.  I still occasionally build a wall between the two of us, as I did a few years ago when a young person near and dear to me was diagnosed with a deadly disease.

But because I’ve been called according to His purpose, that’s not the whole story.  I can fail like Jonah.  I can run in the opposite direction from God’s clear guidance.  Even when I turn around and head the right way, I can be angry and bitter and resentful about the things He’s doing in this world, as Jonah was during his camp-out.  But God, in His faithfulness and compassion, will still cause all things to work for good, including my rebellion.  He might even use that rebellion to save some of the lost souls around me.  Not that that would justify my actions; that’s just who this God of amazing grace is.

Ann O’Malley is the pseudonym of a new author seeking a publisher for her memoir of suicidal depression.  Her pen name comes from “anomaly,” that feeling of being different, of not really belonging, which plagues so many of those who suffer from depression.  For more of her writing, check out her blog, “Those Who Weep: Not-Quite-Evangelically-Correct Thoughts on Suffering,” at https://thosewhoweep.blogspot.com.