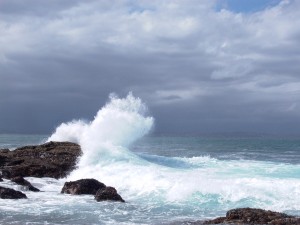 John answered them all, “I baptize you with water.  But one who is more powerful than I will come, the straps of whose sandals I am not worthy to untie. He will baptize you with the Holy Spirit and fire.” (Luke 3:16 NASB)

John the Baptist was the voice of one calling in the wilderness to prepare the way of the Lord.  Isaiah the prophet spoke so prophetically of the coming of the forerunner who would prepare God’s people for the coming of the Messiah.  John heralded that the kingdom of God was at hand and that the Messiah would soon come.  John preached repentance to the people so they would be aware of their sin and unworthiness ~ their fallenness displaying their deep need for the Messiah.  They must prepare for the coming of the Messiah by repenting.  Though John was baptizing in water, only Christ would lead people to the infilling of the Holy Spirit.  It is the Holy Spirit who overshadows and brings one into the New Covenant of grace, light, and power, to become new creatures in Christ.

John the Baptist was preaching and bringing the Old Covenant to its fulfillment; the time when Christ, the Messiah, would arrive on the scene ~ carrying with Him His great power to baptize with the Holy Ghost and with fire.  This could only be done by the Creator of the universe for John, though a great prophet, was but a man.  He indeed baptized in water and urged them to repent and make themselves ready for the coming of the Messiah.  That, however, is the scope of his power.  They must now seek the Messiah, the One whose way he was sent to prepare.  John readily admits that the Messiah is more excellent than he.  John says that he is not even worthy to touch the laces of His shoes, yet John was a prophet more so than any of the Old Testament prophets.  The One—Christ is still a prophet above John.

John’s baptism in water made people ready through purifying and cleansing themselves, but only Christ can and will baptize with the Holy Ghost.  He will give the Spirit to cleanse and purify the heart.  The ultimate fulfillment of the baptizing work of the Spirit was seen at Pentecost. (Acts 2:1–4)  Being baptized in the fire of the Holy Ghost is being purified and filled with power to complete the calling of the King for the kingdom.

It is hard on this side of the crèche, that wonderous baby in the manger, to set our minds on waiting for someone who has already arrived.  I believe that this is one of the reasons why we have lost some of the mystery surrounding the blessed birth.  It is imperative to remember that the One is coming again, a time for which we still must prepare.  A time for which we must be ready.  Let us prepare for the coming of Christmas ~ a time to celebrate that because of God’s love, He came a dwelt among us and reconciled us to the Father.  All things will culminate in His second coming and rather than reconciliation, He will present us ~ the Bride ~ to the Father.  Let’s reflect and rejoice on the unfailing Love of God.

← And There Was Light!
The Christmas Story →